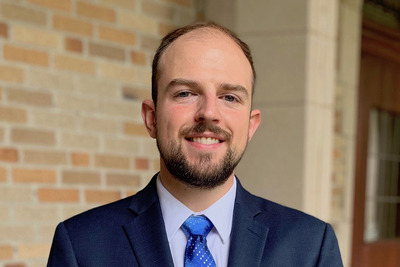 He is the fourth ND Law graduate to clerk at the Supreme Court in the last four years.

Bradley was a top student at Notre Dame Law School. He was the 2020 recipient of the Col. William J. Hoynes Award — the Law School’s highest academic honor awarded to one member of each graduating class.

As a student, he served as the managing articles editor for the Notre Dame Law Review and was the president of the Notre Dame Federalist Society. He was also a Sorin Fellow of the de Nicola Center for Ethics and Culture.

Professor of Law William Kelley, who taught Bradley, said, “Tim combines impressive intellectual firepower with genuine humility and good humor in a way that is rare. It was both a privilege and pleasure to have him as a student.”

Richard Garnett, the Paul J. Schierl/Fort Howard Corporation Professor of Law, also had Bradley as a student. “It was a privilege to teach and learn from Tim Bradley. As a student, he was engaged, thoughtful, and rigorous, and unfailingly collegial and charitable. He has a bright future in our profession, and is a great credit to Notre Dame Law School,” said Garnett.

O. Carter Snead, professor of law and director of the de Nicola Center for Ethics and Culture, for whom Bradley worked as a research assistant for two years said, "Tim's brilliance, dedication, and attention to detail were indispensable to my work generally, and, in particular, for the completion of my book, 'What It Means to be Human: The Case for the Body in Public Bioethics'."

During his second-year summer Bradley worked for Jones Day in Washington, D.C. He was an intern in the Office of the Assistant Attorney General of the Civil Rights Division at the U.S. Department of Justice during his first-year summer. He earned his undergraduate degree from the University of Notre Dame in 2016.

Notre Dame Law School has had a consistent presence on the Supreme Court in recent years.

Justice Barrett graduated from Notre Dame Law School in 1997. She joined the faculty as a professor of law in 2002 and remained a Notre Dame faculty member until her confirmation to the Supreme Court in 2020.

More than one-third of Notre Dame Law School’s tenured and tenure-track faculty members — 14 out of 40 individuals — have clerked at the Supreme Court.