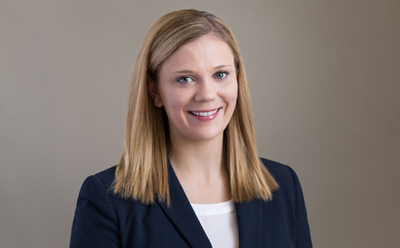 In addition, also during the 2019-20 term, Notre Dame Law Professor Stephen Yelderman clerked for Justice Neil Gorsuch. In total, 13 current members of the Law School’s faculty have clerked at the Supreme Court. Professor Stephanie Barclay will become the 14th next year when she clerks for Justice Gorsuch in the 2021-22 term.

While it is an extraordinary accomplishment to secure a Supreme Court clerkship, those who know Baltes may not be surprised by it. The path that led her to this point has been full of these uncommon feats, including a standout collegiate academic and basketball career, and exceptional achievement at Notre Dame Law School.

She says that the life lessons learned as a basketball player were almost impossible not to internalize because they were so often accompanied by the stark realities of triumph and defeat: “hard work really does pay off; good things require sacrifice; competence breeds confidence; trust your teammates and be a trustworthy teammate; and find a way to overcome adversity.”

Baltes will take those lessons and the ones she learned at Notre Dame Law School with her when she clerks for Justice Kavanaugh. “It is an honor to have the chance to clerk at the Supreme Court, and for Justice Kavanaugh in particular. So many people have poured into me — throughout my life, and certainly at Notre Dame — to bring this opportunity within the realm of possibility. I am grateful. I am humbled. And, I am excited,” said Baltes.

She says Notre Dame Law School has helped to shape her as a lawyer and as a person.

“Every single day I learned from professors who challenged and inspired me with their intellect, integrity, and conviction. These were people who did not just have knowledge I wanted to absorb; they were living lives I wanted to emulate,” said Baltes.

She credits those same professors and her law school classmates for going out of their way to invest in, encourage, and guide her on her path, both while she was in law school and since she entered the profession.

“I am overwhelmed with gratitude for my Notre Dame Law School education and the entire Law School community. I regularly draw on the substance of what I learned in the classroom, as well as the character I saw modeled every day, and the community that continues to support me,” said Baltes.

At the Law School’s 2017 commencement ceremony, Baltes was awarded the Law School’s Farabaugh Prize for high scholarship in law — one of the top three academic awards given to members of each graduating Notre Dame Law School class.

During law school, she served as executive editor of the Notre Dame Law Review and was a research assistant for Richard Garnett, the Paul J. Schierl/Fort Howard Corporation Professor of Law.

“It was a joy and a privilege to teach and learn from Lexi during her years at Notre Dame Law School. She was an outstanding student — thoughtful, insightful, engaged — and it is no surprise that she is already doing so well in the profession. She will provide top-flight service to Justice Kavanaugh, the Court, and the country,” said Garnett.

“I had taken several classes with Judge Barrett as a student at Notre Dame and had tremendous admiration for her and her work. The opportunity to come back and work for her as a law clerk was a dream situation for me,” said Baltes.

Baltes is now an associate at Consovoy McCarthy in Arlington, Virginia.