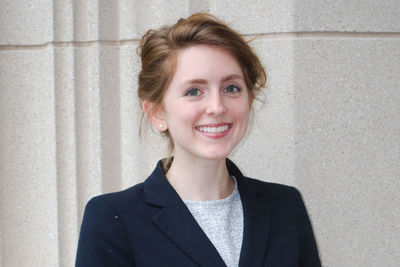 “I am beyond grateful and excited to be clerking at the Supreme Court," Beck said. "It is a great privilege to spend a year working in that building, and for Justice Kavanaugh in particular.”

While at Notre Dame, Beck served as editor-in-chief of the Notre Dame Law Review and was an associate for Jones Day during the summer after her 2L year.

She was the recipient of the Dean Joseph O’Meara Award for outstanding academic achievement—one of the top three academic honors given to a Notre Dame Law School graduate every year. She was also a 2016 John Marshall Fellow with the Claremont Institute.

During the summer after her 1L year, she was a clerk in the Office of the Indiana Attorney General. She earned her bachelor’s degree at Cedarville University in Ohio.

Professor A.J. Bellia, who taught Beck at the Law School, lauded her abilities and her character.

“Audrey is a brilliant lawyer, one of the finest students I have had in 20 years of teaching,” Bellia said. “She is also one of the kindest, most decent individuals you’ll ever meet. She is as honest and humble as she is learned and accomplished.”

Beck said she was drawn to Notre Dame Law School’s Catholic identity and its faculty’s dedication to developing good lawyers, in addition to producing first-rate scholarship.

“I knew Notre Dame would not be a place that would just check the boxes. I knew it would help grow me into someone different,” Beck said.

She had initially not thought about clerking. It was her professors who urged her to consider that possibility.

“They helped me faithfully and prudently consider all of my opportunities and guided me to make professional decisions as a Christian in a way that I know I would not have found at other schools,” Beck said.

She is grateful for the guidance and support of the Law School’s faculty members, particularly Professors Bill Kelley, A.J. Bellia, and Rick Garnett, who encouraged her to pursue clerkships and who have all served as past Supreme Court clerks, as well as Judge Amy Coney Barrett, Professor Carter Snead, who she worked for as a research assistant, and the late Professor John Nagle.

“I owe so much of every opportunity to the students, alumni, and professors that chose to help me and invest in me—with an eye to my flourishing, not just my professional success,” Beck said. “They made all the difference in guiding me to the place I am now and giving me sure footing as I discover what I am called to do.”