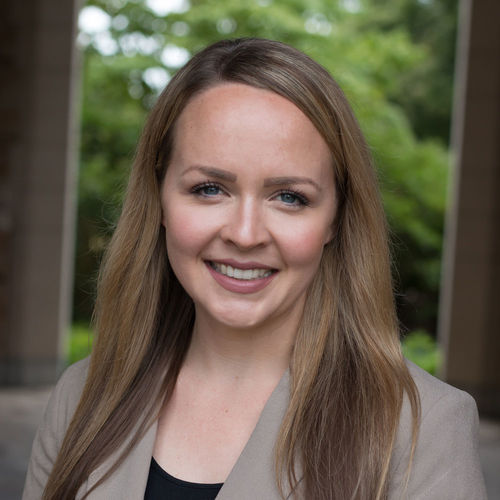 Professor Stephanie Barclay’s research focuses on the role our different democratic institutions play in protecting minority rights, particularly at the intersection of free speech and religious exercise. Barclay’s academic writing has been published or is forthcoming in publications such as the Harvard Law Review, the Washington University Law Review, the Notre Dame Law Review, and the Boston College Law Review. Her recent article, "An Economic Approach to Religious Exemptions," was selected for the 2020 Stanford/Harvard/Yale Junior Faculty Forum.

Barclay has frequently appeared in the national media to discuss First Amendment issues, including appearances on BBC World News, Wall Street Journal Live, and Fox News. And her work has been featured in media outlets such as The New York Times, The Wall Street Journal, The Washington Post, USA Today, Bloomberg BNA, Deseret News, The Hill, and Law 360. Barclay is a Nootbaar Fellow at the Nootbaar Institute on Law, Religion, and Ethics at Pepperdine University, and a Faculty Affiliate at the Constitutional Law Center at Stanford Law School.

Barclay directs Notre Dame Law School’s Religious Liberty Initiative, which involves promoting religious liberty scholarship, hosting events for thought leaders in this space, and launching a new Religious Liberty Clinic. Through this program, students defend religious freedom for individuals of all faiths. Students advise clients outside of the courtroom, as well as pursue their claims in the trial courts and appeals up to and including the U.S. Supreme Court.

Prior to joining the Notre Dame faculty, Barclay was an Associate Professor of Law at BYU Law, where she was twice voted Professor of the Year by her second- and third-year students. Before becoming a professor, Barclay litigated First Amendment cases full-time at The Becket Fund for Religious Liberty, where she represented many organizations and individuals at both the trial and appellate level, including before the U.S. Supreme Court. Barclay has three times been named a Washington D.C. Super Lawyer Rising Star (for 2016, 2019, and 2020). Before joining Becket, Barclay worked at Covington in Washington, D.C., where she drafted multiple Supreme Court briefs, including defending the rights of a Muslim prison inmate seeking to wear a religious beard. She served as lead counsel on multiple additional trials and appeals.