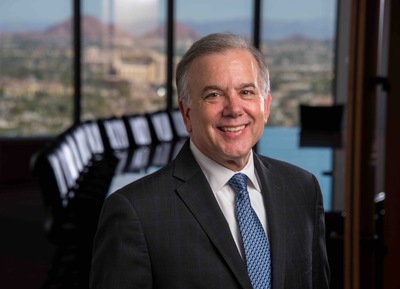 Before he started law school at Notre Dame, Matt Feeney ’79, ’83 J.D., spent a year teaching in a Catholic elementary school in Phoenix as part of the Holy Cross Associates, a post-graduate service program administered by the Congregation of Holy Cross.

The program’s pillars – a commitment to service, community, a simple lifestyle, and spirituality – resonated with him.

Feeney has gone on to enjoy great success in his legal career. He is the chair of Snell & Wilmer, a Phoenix-based law firm with more than 400 attorneys in 11 locations.

And he has remained committed to those values that attracted him to the Holy Cross Associates nearly four decades ago.

When Feeney looks back, he can see that his experience as a Holy Cross Associate laid the foundation for a lifetime of social responsibility, both personally and professionally. He says that many of his life’s threads, including a passion for serving the poor and an ongoing collaboration with the Congregation of Holy Cross, lead back to his year as a Holy Cross Associate.

“Father Hesburgh once said you will never find a greater collection of good people than at Notre Dame, and I found that to be true,” Feeney said, adding that many of those good people he encountered as an undergraduate were Holy Cross priests.

“They caused me to look beyond my narrow view of the world and opened my eyes to something broader,” he said. “They helped plant the seed of how I can contribute in some way – they drew me into becoming interested in the Holy Cross Associates and other causes and efforts that I am involved with today.”

After his year of service, Feeney enrolled at Notre Dame Law School. During his years as a law student, he served as a student firefighter and worked on the administrative side of the Holy Cross Associates with Rev. John Fitzgerald, C.S.C., who ran the program.

During his third year as a law student, Feeney was weighing what to do after graduation. He went to Professor G. Robert Blakey for advice. He told Blakey that he was considering an offer from a law firm that felt like a good fit, but he thought that maybe he should be doing something more service-focused instead.

“Professor Blakey told me that he firmly believed a lawyer of conscience could make a meaningful difference anywhere,” Feeney recounted. “He said, ‘Trust me, if you become a good lawyer, you will have plenty of opportunities to do so.’”

Feeney has done just that.

His first opportunity came when Father Fitzgerald and another Holy Cross priest approached him with their plan to establish a Catholic Worker house in Phoenix. Feeney helped them with the legal paperwork. The result was André House, which opened in 1984 and continues to meet the basic needs of the poor and homeless who walk through its doors each day.

A few years later, the priests approached Feeney about forming a job service for the homeless in Phoenix. He jumped right in and became one of the founding members of St. Joseph the Worker – an organization that has been helping homeless people secure quality employment for over 30 years. Feeney is passionate about the cause. Every year, his acoustic musical group, feeney/winthrop, performs a concert as St. Joseph the Worker’s main fundraiser. The group has raised more than $400,000 through these concerts over the past 11 years.

Feeney has been with Snell & Wilmer since his first year out of law school. His practice focus is on mergers and acquisitions, securities offerings, SEC reporting and compliance, and corporate governance matters, including advising corporate boards and board committees.

He is proud of the firm’s strong commitment to social corporate responsibility, which he says includes maintaining high standards of integrity for their clients, fostering an enjoyable and respectful working environment for employees, and a tradition of service and leadership to the community.

In the late 1980s, Feeney co-chaired the firm’s pro bono committee with Larry Winthrop, who is a member of feeney/winthrop. They presented a pro bono policy that provided attorneys with full “billable hour” credit if they performed legal service to the poor. The firm adopted the policy – one of the first of its kind in the nation at that time.

“I am firm believer that people want to be part of institutions that stand for something meaningful. We look for people who are both excellent lawyers and good people,” he said. “I can trace that back to Notre Dame and wanting to be part of an institution that does good.”

Feeney and his wife, Michele Wendling ’83 J.D., met while at Notre Dame Law School. He says they have raised five loving and compassionate children. “If I do nothing else in my life,” he said, “that alone will be enough for me.”

And he says Professor Blakey was right. “I believe even a corporate lawyer in a big firm can make a real difference for the poor and disadvantaged if he or she is open to doing so,” Feeney said.

From the window in his first office at Snell & Wilmer, he could see the elementary school where he served with Holy Cross Associates. He said, “It was as if God were reminding me to not forget to keep my heart open to new ways to make a difference. My career at Snell & Wilmer has provided me with opportunities to do so.”