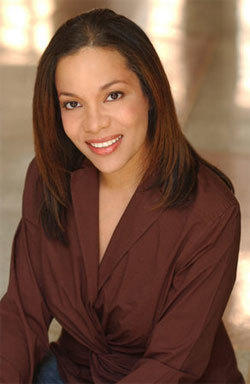 Sunny Hostin, J.D. ’94, was named the Alvin McKenna Alumnus of the Year Award and asked to give the keynote address at the 2012 Black Law Students Association awards banquet at NDLS this year.

The Alvin McKenna Award is given to an NDLS graduate who has distinguished him or herself within the African American community and supports BLSA programs and activities. The honoree also demonstrates active involvement within the community.

Hostin, who worked as a federal prosecutor before joining CNN as a legal analyst and ABC as an anchor on ABC News’ World News Now and America This Morning, credited NDLS with preparing her for a successful career as a Notre Dame lawyer. She said NDLS graduates’ preparation is a testament to the quality of the professors who ensure graduates have a well-rounded world view that includes considering the morality as well as the legality of their actions.

She singled out three of her professors in particular, starting with Professor J. Eric Smithburn, who “convinced me to participate in the London Program, which changed my view of so many things. I come from very humble beginnings in the South Bronx, so to see the bigger world at that point made a big impression on me.” Moreover, she said, Professor Smithburn continued to stay in touch with her, providing wise counsel and support and writing crucial letters of recommendation for her.

She said Professor G. Robert Blakey, perhaps the nation’s foremost authority on the Racketeer Influenced and Corrupt Organization Act (RICO), held her to a very high standard during her first semester, which was hard on her “but which showed me what I could do when I did my best. I am grateful to him.”

And it was Professor Jay Tidmarsh, she said, who, when she was convinced she had just failed his exam “took me aside and explained that I had been one of the best students in his class and kind of talked me off the ledge and rebuilt my confidence. It was a very kind thing to do.” (Sure enough, it turned out Hostin actually did very well on the exam.)

Other BLSA Award Winners
In addition, Tidmarsh received the Crutchfield Award, named in honor of the first African American member of the Notre Dame Law School Faculty. BLSA presents the award to a current professor, who like Professor Charles F. Crutchfield, demonstrates a commitment to diversity both in and out of the classroom, as evidenced by scholarship and personal example. (Tidmarsh was also selected by the entire 3L class as their 2012 NDLS Professor of the Year.)

Isadora Huntley, J.D. ’12, served her 3L year as BLSA’s Co-director of Community Service. She was awarded the Dwight King Excellence in Service Award for that work as well as for representing NDLS BLSA both as a volunteer at organizations throughout the South Bend community and as National Director of Public Relations for the National Black Law Students Association.

Rebecca Ward currently serves NDLS as Senior Office Assistant for Emeriti Faculty, Adjunct Faculty, and Law School Administrators. She was presented with the BLSA Appreciation Award in recognition of the positive impact she has had on the lives of BLSA students ever since she first joined NDLS in 1995. In presenting the award, BLSA noted that “Ms. Rebecca” has always been like BLSA’s mother away from home and has brought a passion for the work of the BLSA that stems from her admiration for an organization that educates and enhances the minds of young African Americans.