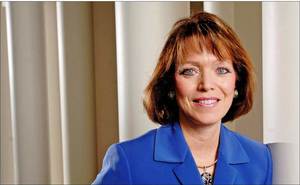 Nancy Gargula will receive the 2015 Woman for All Seasons Award from the St. Thomas More Society of Indianapolis at the annual Red Mass Dinner on October 5, 2015. This award is given annually to an individual whose life and work exemplifies the ideals of St. Thomas More who was an English lawyer, author and statesman. As Lord Chancellor to King Henry VIII of England, More was widely recognized as one of the greatest lawyers of his time, a dedicated husband and father, and a man of deep faith. Among her notable accomplishments that led to her selection were Nancy’s distinguished legal career (which has included her role as the general counsel and Secretary to the Board of one of the nation’s largest financial institutions, partnership in a large multi-jurisdictional law firm and her current service as the United States Trustee for Region 10 and for nine years Region 13 as well for the past 14 years), her shining example of the Catholic faith by giving generously of her time (Past President of the St. Thomas More Society and Board member for 34 years; Red Mass Planning Chair for 34 years; Past President of the Indianapolis Bar Foundation, service on six professional associations and non-profit Boards for the past 30 years including serving as the Region 8 Director on the Notre Dame Law Association Board for the past 3 years; service on the Indiana Supreme Court’s IOLTA Committee, community volunteer for numerous organizations, events and projects), her talent (Red Mass Cantor for 33 years; Cantor, Choir Member at her parish for 25 years; cantor for parish funerals, weddings and festivals), and treasure (Nancy and her siblings established The Joseph T. Helling Memorial Scholarship Fund in memory of her father who also taught at the Notre Dame Law School; Nancy and Mark Gargula Endowment for Excellence in Public Service at the University of Notre Dame Law School established on the occasion of Nancy and Mark’s 30th Anniversary of graduating from the law school; member of the Miter Society for the Archdiocese of Indianapolis; Indianapolis Zoological Society Nussbaum Member) as well as the number of awards she has received during her career, including Distinguished Fellow and Patron Fellow of the Indianapolis Bar and Indiana State Bar Associations, Board of Manager’s Award, President’s Award and Distinguished Barrister Award, to name a few. A unanimous decision was reached that Nancy’s life, work and extraordinary legal career exemplify the ideals of St. Thomas More.