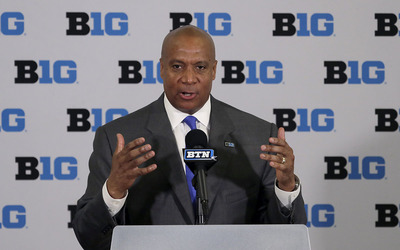 Warren was wrapping up his MBA at Arizona State University, where he planned to stay for his law degree, too. But his older sister Marilyn, who lived in South Bend with her husband John Shumate, an assistant coach for the Fighting Irish men’s basketball team, told Kevin she could really use some help with their two young children.

“When I received the call from Marilyn, it was just something in my spirit that said this is the right thing to do at the right time, to help family,” Warren said. “And the moment I walked on campus, I could feel the hand of God on me to say, ‘This is the place that you need to be.’”

“And I remember going in to talk with Dean David Link to tell him that I was seriously considering transferring to SMU Law School because that’s where my sister was moving with her husband and my niece and nephew,” Warren said.

Link listened to Warren, and encouraged him to pray on the decision.

“He said, ‘Notre Dame is an incredibly special place. You’re going to get a world-class education. You’re going to meet individuals who are going to be friends for a lifetime. But the best thing about it is that you’re going to learn how to be a Notre Dame Lawyer, which is unique, powerful, and will have an impact on the remainder of your days on earth,’” Warren said. “And that really resonated with me, and so I made the decision to stay at Notre Dame.”

Pursuing a purpose in sports

Warren has built on his Notre Dame Law School education, and carried the lessons he learned there through his illustrious career. He has spent most of his professional life in the sports world, which he felt from a young age was his purpose in life.

“And I am truly honored and blessed that I’ve been able to build a career in my purpose,” he said. “And that purpose is really helping people, but doing so in the context of sports and law and in business, to bring all of those different items together.”

Warren played basketball during his undergraduate years, finishing at Grand Canyon University in his hometown of Phoenix, where he is in the GCU Athletics Hall of Fame, and went on to work for 21 seasons in the NFL. He held vice president positions with the Detroit Lions and St. Louis Rams, where he was part of the team that won Super Bowl XXXIV.

He joined the Minnesota Vikings organization in 2005, and held a variety of senior leadership positions, including serving as the team’s chief operating officer from 2015 to 2019. And on September 16, Warren transitioned into perhaps his biggest role yet when he became commissioner of the Big Ten Conference.

Throughout Warren’s career, he has relied on the skills he cultivated at Notre Dame to help him navigate the complex scenarios he’s encountered in the NFL, including building a new stadium and practice facility and hosting a Super Bowl.

“The professors taught me how to learn, how to study, how to process information, how to write,” Warren said of his Notre Dame Law School experience. “So, to this day, I feel like the legal education I received at Notre Dame, and more the life education I received at Notre Dame, still plays a key role in my everyday life, not only as a person but as a business executive and as a lawyer.”

Click on the video above to watch the June 4, 2019, press conference where Kevin Warren '90 J.D. was introduced as the next Big Ten commissioner.

As Warren takes the reins of the Big Ten from Jim Delany, who oversaw the conference for 30 years, he still draws on his Notre Dame experience, and still treats each day as an opportunity to learn.

“I approach every single day like it’s my first day on the job,” Warren said. “I think that’s the best thing that I’ve learned during my journey, is the importance of being a lifelong learner.”

That attitude began in Warren’s childhood home. The youngest of seven siblings and child of two educators — his father a teacher, principal, and professor, and his mother a librarian — said his family always emphasized education, faith, and service.

This foundation, Warren said, is a big part of what made Notre Dame such a good fit for him.

“And what still resonates with me today is Notre Dame not only taught me about law and business, but they taught about relationships and how to handle clients and how to conduct yourself in the real world, how to be a hard worker, how to make sure that you help your fellow people, why community service is so important, and that no matter where you go in the world, you will always be a Notre Dame Lawyer and that you share a responsibility to make sure you carry yourself with style, grace, and class,” Warren said. “And for that, I will forever be grateful.”

And as Warren takes on yet another challenge in his new role with the Big Ten, he is grateful, too, for his decision nearly 30 years ago to help his sister with her two young children — both of whom are now lawyers.

“I feel very fortunate that something that started out as a decision to go help my family allowed me to get a world-class education that’s still very valuable to me today,” Warren said.