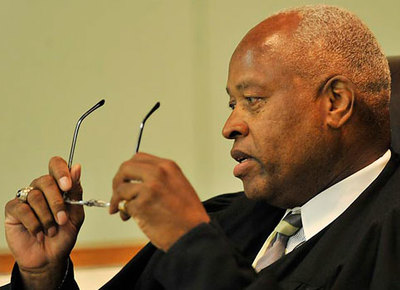 The Notre Dame Law School community has learned that Judge Willie Lipscomb Jr. died unexpectedly while winterizing his boat at his Detroit home on November 6.

Judge Lipscomb was a 1975 graduate of the Law School where he served as the student Executive Director of the Notre Dame Legal Aid & Defender Association. He began his professional career as Assistant Prosecuting Attorney for Wayne County from 1975-1979. After four years in private practice, he became a magistrate for the 36th District Court of Michigan and two years later was named a judge. He served as a judge for the 36th District Court until his retirement in 2012. This past summer, he ran for mayor of Detroit. Nationally Judge Lipscomb may be best known for the innovative Handgun Intervention Program, which he established in 1993. The program provides that as a condition of release offenders arrested for carrying concealed weapons must attend a class on the negative consequences of gun use.

Judge Lipscomb was a loyal friend and mentor over the years to many members of the Law School community. Professor Patricia O’Hara, former dean, noted that:

“From the time Willie and I were students together at the Law School and throughout the many years since graduation, Willie was an exemplar of Notre Dame’s commitment to use the power and privilege of a law degree for the service of others – especially those most marginalized. Moreover, amidst his many responsibilities as a judge, he always took time to return to the Law School to share his wisdom and experience with our students. He was a gentleman in the purest sense of the word – a gentle man with a deep soul imbued with a sense of justice tempered by compassion. He will be much missed by the many members of the Notre Dame family whose lives he touched.”

Judge Ann Claire Williams of the United States Court of Appeals for the Seventh Circuit, a classmate of Judge Lipscomb, commented:

“Willie played an instrumental role in my decision to come to Notre Dame and we worked on many projects together in law school. Willie was a natural leader, whether on the basketball court or in a court of law. He was a motivator, innovator, and collaborator who cared deeply about people and devoted his life to public and community service and to ensuring that our legal system provided equal justice for all people. He never let his robe get in the way of his humanity. He had the ability to make everyone feel valued and was as comfortable chatting with his colleagues as he was with the people who cleaned his office. Although we are deeply saddened by Willie’s passing, his love of life, wonderful spirit, and commitment to justice will live on in our hearts and minds forever.”

Beloved by generations of Notre Dame students, Judge Lipscomb received the Alvin McKenna Alumnus of the Year award from the Notre Dame chapter of BLSA in 2011 and was recognized on a number of occasions by the University’s alumni association, including receiving the William D. Reynolds Award. Wayne County Prosecutor Kym L. Worthy, NDLS ’84, told ClickonDetroit.com that Judge Lipscomb was the sole reason that she joined the Prosecutors’ Office thirty years ago:

“He was a mentor to several decades of Notre Dame African American law students and had a profound impact on many lawyers. He had a passion for the law, he was committed to the community and was generous with his time and wisdom. The legal community will miss him, and I will miss him terribly."

“Judge Lipscomb was the embodiment of a Notre Dame Lawyer. He always went out of his way to help others and to ensure that social justice was done. His love for Notre Dame and the Notre Dame family was something tangible to anyone who met him.

“During his mayoral campaign I had the opportunity to meet many of the people whose lives he touched outside of the Notre Dame Family within the city of Detroit. His generosity of spirit and devotion to mentoring and shaping young lives was an aspect of every part of his life. Judge Lipscomb was a devoted father and loved his daughter and three grandchildren more than anything in the world.

“I feel so honored that he was a part of my life. He was much more than just a mentor, he was like a father to me. The positive impact that Judge Lipscomb has had on the Notre Dame Family in the 38 years since his graduation is more than words can express. I am proud to be a part of his legacy. May his soul rest in eternal peace with our Lord.”

In lieu of flowers, the family asks that gifts be made to the Notre Dame Law School Willie Lipscomb Scholarship, c/o Dean’s Office, 2100 Eck Hall of Law, Notre Dame, IN 46556. Scholarship gifts may also be made by calling Patricia McLaughlin, 574-631-7936, pmclaug1@nd.edu.

Photo of Judge Lipscomb courtesy of The Detroit News.