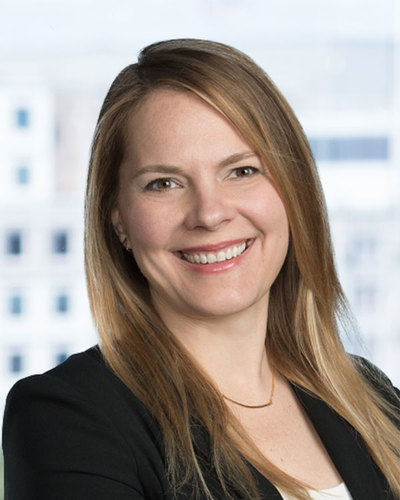 It’s not that Jennifer Trock '98 J.D. was surprised to find a supportive community at Notre Dame Law School. After all, she was hoping she would.

"I loved it," she said. "I was so pleasantly surprised — and maybe 'surprised' isn't the right word because I kind of hoped this would be the case — at how collaborative the environment was."

The sense of community and small class sizes appealed to her before she even enrolled at the Law School. Within her first year, Trock found plenty of classmates who were eager to form study groups, learn, and collaborate.

"I found that whole environment a positive way to learn,” Trock said. “It felt so much less competitive than I had expected it to be, and it allowed me to compete with myself rather than try to compete with others."

And now as a leader in her firm, Baker McKenzie, and in her field, aviation law, Trock seeks to foster that same sort of community she found at Notre Dame. At Baker McKenzie, she sits on the global steering committee for the firm’s Industrials, Manufacturing, and Transportation Industry group, co-leads the firm’s Unmanned Aircraft Systems focus group, and leads the Washington office's Baker Women attorney group.

"One thing I'd like to achieve is a legacy in the form of a team that really supports each other and grows together — and to do that, to have a steady pipeline of younger attorneys coming up and being mentored and trained by those, hopefully, that I've mentored and trained," Trock said.

She'll have a significant opportunity to do just that when she takes over as chair of the American Bar Association's Forum on Air & Space Law beginning in January.

"One thing that I hope to achieve as chair is emphasizing that community aspect of it by bringing along our younger attorneys and making sure that they're getting the same value out of it that many of our longer-term members have," she said.

While Trock has worked hard to get herself to the top of the aviation law field, she began the specialization by coincidence. During her undergraduate years at Wheaton College, she studied chemistry and philosophy. She's always had an analytical mind and keen eye for detail, but figured she would use her educational background to go into environmental law.

That's the practice group she was hoping to join when she took a job with the City of Chicago's law department after graduating from Notre Dame.

"But the way it worked out, they offered me a position in the aviation group. And I think I said, 'Sure, what's that?'" Trock said with a laugh. "It was nothing I had thought about. I didn't even know why would the City of Chicago have an aviation department."

She quickly learned that the city operated, at the time, three airports: O'Hare, Midway and the now-closed Meigs Field. She worked on "the gamut of everything having to do with the airports" — contracts, regulation, procurements, ordinances — and in doing so tapped into the knowledge she built at Notre Dame Law School.

"I took all of the admin law classes I could, and I really enjoyed administrative law," Trock said. "I really enjoyed the nuts and bolts and the detail orientation of those areas. And I think that also tied in with my analytical skills that I developed in undergrad and just my personal tendency to be fairly detail-oriented and analytical in that respect."

After nearly five years in Chicago's law department, Trock took a position as an associate with Pillsbury Winthrop Shaw Pittman in Washington, D.C. The move allowed her to expand her focus within other sectors of aviation and transportation law, since the City of Chicago only dealt with airports.

Trock spent a total of 14 years at Pillsbury Winthrop Shaw Pittman, including eight as partner, before moving with several of her colleagues to Baker McKenzie in May of 2017.

"The change just really allowed us to take advantage of a much bigger global platform," she said.

How Notre Dame prepared her

Looking back, Trock says her experiences at Notre Dame perfectly prepared her for the work to which she has dedicated her career thus far. A summer studying in Notre Dame's London Law Program after her first year expanded her global perspective and instilled in her a passion for travel and international law. After her second year, she clerked for the Environmental Protection Agency in Philadelphia, where she gained substantive experience in administrative and regulatory law.

The result has been a rather unexpected journey into a cutting-edge field of law that Trock said she loves.

"Quite honestly, I wasn't expecting to either like it or stay in it, but as it turns out aviation meshes very nicely with my interest in travel. Also, there's an easy segue to international law work with aviation because, while I started doing airports, it's a very large industry and airports are now just one sector that I represent," Trock said. "We also work with airlines and aircraft manufacturers, travel distributors, the online travel agencies and things like that. Drones and autonomous driving is an emerging area that we're getting a lot of work in. It's just a really interesting and cutting edge area."

Moving forward — along with her hopes to cultivate a stronger sense of community within the field of aviation law through her work with the ABA — Trock said she wants to continue to use her skills to give back.

"Another thing that I gleaned from my experience at Notre Dame is the value of giving back and making sure that you're part of a bigger purpose," she said.

Trock is involved with several charities in Washington, D.C., including Food and Friends, which delivers nutritionally customized meals to people living with life-challenging illnesses like HIV/AIDs, cancer, and diabetes. Trock sits on the board of the organization, which she said also provides a friendly and supportive community through personal interactions at meal deliveries.

"I love it because it has such a huge impact," she said of her work with Food and Friends. "You really see the difference that you make in people's lives."