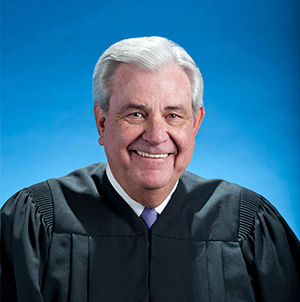 When former St. Joseph County prosecutor and senior Indiana Court of Appeals Judge Mike Barnes passed away May 22, he left behind a legacy of abiding friendship, love, and compassion for Notre Dame Law School and its graduates. As the testimonials from his friends and colleagues attest, he will not be forgotten anytime soon.

He was “a loyal son of ND Law and a pillar of the community,” said Professor Nell Jessup Newton, who served as Notre Dame Law School dean from 2009-2019. She said Barnes often attended events at the Law School and “whenever I saw Mike he always asked if there was anything he could do to help our students.”

Indeed, over the years Barnes hired and mentored an astonishing number of Notre Dame Law grads.

Thomas Veldman ’82 J.D., now chairman of the Tire Rack Inc. in South Bend and a member of the Notre Dame Law School Advisory Council, was a Notre Dame student law clerk working in the St. Joseph County Prosecutor’s Office when he first met Barnes. “What strikes me as I look back over the 40 years since then is how much Mike stayed the same person while accomplishing all that he did as a husband, father, and public servant. He brought goodwill and a contagious sense of humor to the important and serious challenges of being a prosecutor and appellate judge. He was dedicated to his family and to his community. He accomplished great things in an understated way. Everyone who knew Mike was better off for having had that privilege.”

U.S. Magistrate Judge Michael Gotsch ’87 J.D. was also hired right out of law school to work in the St. Joseph County Prosecutor’s Office. From that vantage point, Gotsch said, he had a front row seat to many of Barnes’s lasting contributions: establishing a Night Prosecuting Mediation Program, a victim/witness program, and a pretrial diversion program that allowed defendants accused of minor transgressions to avoid having a permanent criminal record in exchange for performing community service and paying a user fee. To ensure synergy among members of the police homicide unit and highly trained, forensic technicians and investigators, Barnes also started the County Metro Homicide Unit.

For a time, Gotsch said, Barnes also asked him to head up the CASIE Center, which Barnes had set up to investigate and prosecute child sexual and physical abuse cases. This multi-unit center includes investigators, counselors, and forensic interviewers who are specially trained to talk to children while avoiding leading questions. Barnes’ revision of the County’s Title 4-D federal child-support program won multiple awards for excellence as well.

Barnes was a great mentor, Gotsch said, and “a huge Notre Dame supporter” who not only hired young Notre Dame lawyers but also undergraduate student interns.

Barnes may have been inspired by fellow Notre Dame Law student Jack Krisor ’72 J.D. “Mike didn’t expect to stay in town after graduation,” Gotsch said, “but then thanks to Jack he found he could stay and he became a vitally important part of the community.”

Today Krisor practices law at the South Bend firm he founded in 1975. “Mike was a year behind me at Notre Dame,” he said. “We became friends there, and we remained best buds ever since.” While still in law school, Krisor interned at the St. Joseph County Prosecuting Attorney’s office. A year later, Barnes followed suit. After graduation, Krisor joined the office as a deputy prosecuting attorney. When Barnes graduated, Krisor helped him get a position there as well.

“Mike was the masterful maestro for so many in the legal profession,” he said. “His legacy will endure for years to come and his compassion and empathy for all he came in contact with will never be forgotten.”

St. Joseph County Superior Court Judge John M. Marnocha said he first met Barnes when, as a young attorney in private practice, he was invited to join Barnes and a group of prosecutors for one of their regular early-morning breakfasts in downtown South Bend. “One thing led to another, and soon I had a chance to work for him part-time in the child-support division.” Later he joined the office full-time to prosecute lower-level crimes until being promoted to felony cases. Eventually he was appointed chief deputy. In all, he worked with Barnes for 12 years.

“He was a classic prosecutor,” Marnocha said, “in that his only interest and concern was for truth, for justice, and for the citizens he represented.”

To illustrate the point, he recalls a time when he and Barnes were waiting for the elevator at work, and when the doors opened, a very large and formidable man emerged and approached them with a lot of emotion. He told Barnes that he was upset because a warrant was out for him due to his having missed a court date and he couldn’t bear to be in prison and away from his family over Christmas. It turned out that the man had missed a court date. “Mike never flinched, but just calmly looked the man in the eyes and then turned to me and said, ‘Johnny, we can’t let this man be incarcerated on Christmas Day.’” Barnes and Marnocha then proceeded to escort the man to the clerk’s office to ensure he was given a new court date after Christmas.

Barnes, he said, “was compassionate toward absolutely everyone — victims, defendants, and witnesses alike. He saw everyone as human beings.”

Barnes hired Tere Morguson ’95 J.D. in 1988 to create a special unit to investigate and advocate for survivors of domestic violence. She said that “everyone who had the honor of working with him would tell you of his remarkable heart, of his compassion and empathy for everyone — his staff, opposing counsel, indicted defendants. He took his position as county prosecutor immensely seriously and routinely reminded us of the duty and obligation that went hand-in-hand with the power and responsibility we had as his deputies. He would tell us that ‘any monkey can read the statutes and dictate a charge. That is not the issue. The question is not can we, but should we prosecute.’ He understood that in criminal law, practitioners were dealing with life and death issues and freedom. He would warn us, ‘Before you ever decide to charge, understand fully what is at stake. It is not merely a settlement resolved with money. It has the power to carry with it the forfeiture of another’s freedom.’”

Adjunct Professor Kate Singer ’97 J.D. said Barnes was her first boss as well, and made a lifelong impression on her. “Mike framed the way I would forever look at fairness in criminal cases,” she said. “Mike knew that justice wasn’t always achieved by the singular path of prosecution, that it required more than the capacity to read the law and use the authority to prosecute. He knew that justice demanded applying one’s heart and conscience to the power and responsibility of being a prosecutor. As Mike told me when I started as a deputy prosecutor, ‘We charge people to help them, and sometimes we don’t charge people to help them.’”

Professor Emeritus of Law Tex Dutile ’65 J.D. said that during a 20-year stint as prosecutor, a “fair, firm, but gentle approach” characterized the deployment of Mike Barnes’ office’s resources and its exercise of discretion. “Yes, he vigorously prosecuted serious crime. But he also developed countless devices not only to service victims of crime, but also to create an environment making serious crime less likely.”

Dutile recalls, “Mike was a second-year student when I joined the faculty at Notre Dame. He was in my Criminal Law course. True, I was his professor. But I was also roughly a contemporary — just eight years older. So, we quickly became friends — and remained so for almost 50 years. He was a serious but fun-loving student, warm and caring, and with a self-effacing demeanor. These qualities stayed with him despite his rapid rise through the legal ranks.”

Dutile recalled how in the mid-1980s, while serving as county prosecutor, Barnes delighted the crowd at a Carnival for the Arts benefit held at South Bend’s Century Center with a perfectly choreographed and lip-synched version of Elvis Presley’s Jailhouse Rock. “On its face,” Dutile said, “this is only a funny story about a great guy. But it makes an important point: Here was a public official, involved daily in the most serious sorts of activities, humbly willing nonetheless to ‘put himself out there,’ to let us see his human, more frivolous side. He didn’t take himself too seriously that night — nor did he ever.

“May more of our public officials ‘Be Like Mike!’ He will be sorely missed.”

“The most meaningful gift he gave my family was his compassion. Shortly after I graduated from law school, the unthinkable happened when my brother was tragically killed, the victim of a brutal crime in another state. Judges Barnes reached out to my parents to provide solace, a listening ear and support for them as they endured burying their son and waiting for the results of the investigation and subsequent prosecution. I still remember the day that Judge Barnes stopped by our home to speak with my parents.

“And many years later, when two immediate members of my family were the victims of crimes while in South Bend, I reached out to Judge Barnes to see if he knew who we could speak with regarding support for victims, the process the Prosecutor’s Office would follow, and to get an understanding of what to tell my family members to expect. Judge Barnes returned my call immediately, expressing sympathy for my situation, compassion for what the family was going through and he provided helpful contact information. And he followed up with me several times in the following months to see if I was okay and if the family was okay. He was an incredible individual, a dedicated lawyer and a distinguished jurist who lived life to the fullest and made lasting contributions that will benefit us all for many years to come. And for my family, he provided the gift of compassion at the times when we needed it most. May he rest in peace.”