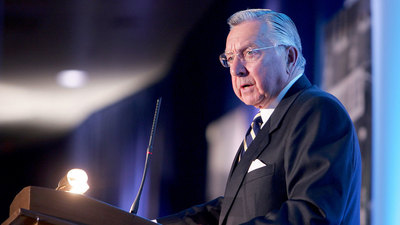 Patrick F. McCartan, chairman emeritus of the University of Notre Dame’s Board of Trustees and a recipient of the University’s highest honors, died Monday (Nov. 30) in Cleveland with members of his family around him. He was 86.

“While Pat McCartan was truly distinguished as a lawyer and leader of his firm, he was for me a dear friend and invaluable mentor,” Rev. John I. Jenkins, C.S.C., Notre Dame’s president, said. “An alumnus who reflected the highest values of the University, his love for and service to Notre Dame were exemplary.”

John J. Brennan, Notre Dame’s current Board chair, said, “Pat’s contributions to the University as Board Chair, Trustee and Fellow were extraordinary, and he leaves behind a legacy of leadership that inspires all of us who serve Our Lady’s University. Pat embodied the values of Notre Dame in matters great and small, and was devoted to advancing the University’s distinctive Catholic mission. He will be sorely missed.”

McCartan was elected to the Board of Trustees in 1989 after serving for the previous 10 years on the Notre Dame Law School Advisory Council. He was Board chair from 2000 to 2007 and also served as a Fellow, one of the 12-member group that is the University’s ultimate governing body. As chair, his tenure was highlighted by the election in 2004 and inauguration in 2005 of Father Jenkins as Notre Dame’s 17th president.

Notre Dame recognized McCartan’s service to his alma mater with an honorary degree in 1999 and, in 2007, with its highest honor, the Laetare Medal, the oldest and most prestigious honor given to American Catholics.

McCartan served for 10 years as the firm’s managing partner, overseeing significant expansion both in the United States and globally. He was cited throughout his career by The National Law Journal as one of the country’s most respected and influential lawyers. In a book titled “America’s Top Trial Lawyers: Who They Are and Why They Win,” the legal scholar Donald E. Vinson listed McCartan among “those consummate courtroom advocates whose reputations are associated with major cases that have had a significant impact on society as a whole.”

Stephen Brogan, a Notre Dame Trustee and McCartan’s successor as managing partner of Jones Day, once said of his colleague: “It’s hard to find anyone who wouldn’t speak highly of him, his character, the way he conducts himself, his consideration for people. He is a very formidable man, but as admirable a person as you will ever come across.”

McCartan was a fellow of the American College of Trial Lawyers and the International Academy of Trial Lawyers, as well as an honorary overseas member of the English Commercial Bar. He was featured in every edition of Best Lawyers in America and profiled in the Wall Street Journal and The American Lawyer.

Active in a variety of civic and professional roles, McCartan received the Archbishop Edward F. Hoban Award for Distinguished Service to the Diocese of Cleveland in 1994 and the Torch of Liberty award from the Anti-Defamation League in 1998. He served as president of the Bar Association of Greater Cleveland, chair of the board of the Greater Cleveland Growth Association, and on the boards of Cleveland Clinic, Ursuline College and Gilmour Academy. He was a member of the U.S. Council on Foreign Relations, the U.S.-Japan Business Council, the Ohio Business Roundtable, the Ohio Board of Bar Examiners, and the Standing Committee on Rules of Practice and Procedure for the United States Courts.

He was a generous benefactor to Notre Dame, and the law school’s moot courtroom is named in his honor.

In presenting the Laetare Medal to McCartan, the University’s accompanying citation concluded with: “Like Thomas More, you have walked the corridors of power while still remaining on the path of the good, the true and the just in all your pursuits.”

McCartan is survived by his wife of 62 years, Lois; a daughter, Karen DeSantis, herself a Notre Dame Trustee, and her husband, Victor; and two grandchildren. He was preceded in death by his son, Patrick F. McCartan III.

Due to the ongoing pandemic, a memorial Mass and celebration of life will be held at a later date. In lieu of flowers, the family requests that donations be made in McCartan’s name to Malachi House at 2810 Clinton Ave., Cleveland, OH 44113, or directed to pediatric cancer research at the Cleveland Clinic Philanthropy Institute, P.O. Box 931517, Cleveland, OH 44193-1655.

Originally published by Dennis Brown at news.nd.edu on December 02, 2020.