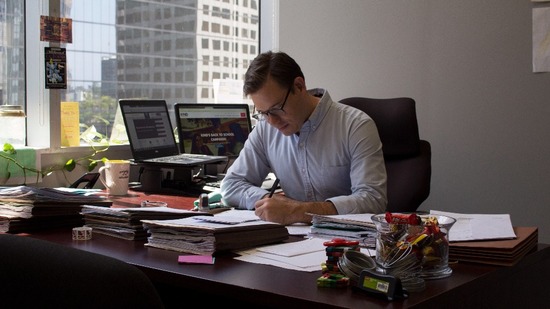 After his first year as a law student, Michael Hagerty ’13 J.D. spent his summer hiking the desert trails of the U.S.-Mexico border.

As a research assistant for Paolo Carozza, a Notre Dame Law professor and director of the Helen Kellogg Institute for International Studies, Hagerty was trying to better understand the challenges of migrants and the governmental and societal responses to undocumented migration.

He performed field work, conducted interviews in several border cities, and traveled to the Tohono O’odham Nation’s reservation – an area that has witnessed a high concentration of both migration and migration deaths along the border.

The experience sparked a professional and personal interest in immigration law that led Hagerty into a career serving immigrant children.

Following his graduation from the Law School, Hagerty was a Thomas L. Shaffer Fellow with the Public Counsel Law Center in Los Angeles. During his fellowship, he represented undocumented children in immigration court and before the U.S. Citizenship and Immigration Services.

In these cases, the children had been very young when their parents brought them to the United States and had lived most of their lives here without immigration status.

After his fellowship, Hagerty stayed on at Public Counsel as a staff attorney and began working with “unaccompanied alien children” – minors who flee their home countries and enter the United States alone. He has helped countless young people in applying for immigration relief via Deferred Action for Childhood Arrivals, asylum status, and Special Immigrant Juvenile Status.

Most of Hagerty’s clients were escaping gangs and domestic violence in El Salvador, Guatemala, and Honduras.

“We sit down with children who have experienced some of the most unimaginable hardships in their young lives and we give them hope,” he said. “Hope for safety, hope for an education, hope for life.”

One child’s story of hope

In the middle of the agriculturally rich region of central California – where the wide-open land is full of sun, dust, and miles of crops – sits the Tulare County Superior Court in Visalia.

On one day in June 2015, Hagerty made the three-hour trip from Los Angeles to Visalia to represent a young client who was facing a crucial hearing. Hagerty knew a favorable decision would mean his client would probably receive a Green Card someday, while an unfavorable decision could mean deportation.

Francisco Montes Montanez was, at the time, a 17-year-old living with extended family in Tulare County after fleeing from Mexico.

In Mexico, his father had died – poisoned from working in pesticide-ridden fields. His mother, instead of allowing him to attend school, forced him to work in the same poisonous fields that killed his father. In addition, gangs had murdered some of his family members and had been asking questions about Montes Montanez.

So, the teen left his family home and found shelter in Tulare County.

Time was ticking for Montes Montanez, who would soon be 18 and ineligible for Special Immigrant Juvenile Status.

Hagerty presented his petition and evidence before Tulare County Superior Court Judge Antonio Reyes. Montes Montanez, who had a limited understanding of English, was terrified throughout the process.

“I was afraid that the judge was going to say ‘no’ and that I would lose my case and be sent back to my home country,” Montes Montanez said. “I was afraid of returning because there is so much poverty there. I wouldn’t be able to study in school, and I didn’t want to be forced to join a gang.”

Reyes, who had not ruled on that specific type of immigration guardianship before, reviewed the petition, asked Hagerty some questions, and then granted Montes-Montanez’s request to apply for SIJ Status. The status waives several restrictions that block adult immigrants from becoming lawful permanent residents.

Hagerty was ecstatic about the judge’s ruling, but what happened next was even more emotional.

“After Judge Reyes granted the request and signed the documents, he sat there looking at Francisco for a long time,” Hagerty said.

Reyes said when he looked at Montes Montanez he saw his father. Then Reyes got tears in his eyes, and Hagerty said everyone else in the courtroom did as well.

Montes Montanez later obtained SIJ Status, which ended his deportation proceedings and enabled him to become a legal, permanent U.S. resident. It also cleared the way for the young man – who dreamed of becoming an architect or engineer – to move forward with his life.

Hagerty currently works as a pro bono coordinating attorney at KIND, which stands for Kids in Need of Defense. Actress Angelina Jolie and Microsoft Corp. founded KIND with a mission to provide legal representation for unaccompanied children in immigration court. In addition to his own cases, Hagerty mentors other pro bono attorneys from law firms, corporations, and law schools who take on cases through KIND.

“I was fortunate to be on the receiving end of being mentored while at Notre Dame Law School, and now I use that experience and what my mentors taught me to mentor others,” he said.

As a native Californian, Hagerty has always been aware of immigration issues. Also, his mother is an immigrant from Nicaragua, so he was “already sympathetic to the plight of the immigrant.”

But Hagerty said his time as a research assistant for Carozza and other experiences at Notre Dame gave him a firsthand view of the difficulties immigrants face.

He was an extern with the National Immigrant Justice Center, based in Chicago, where he worked on refugee and asylum cases, U-visas for victims of crime, and applications for permanent resident status. He also interned at Notre Dame’s Economic Justice Clinic, which provides free legal services for low-income clients in consumer matters such as foreclosures, debt collection, and predatory lending.

“I am grateful to Notre Dame Law School for providing me with the opportunity to gain clinical experience in the public interest field, both as a law student and as a Shaffer Fellow,” Hagerty said. “In our nation, there is such a desperate need to provide legal services for the poor, the disenfranchised, and the marginalized, and through the Shaffer Fellowship and other public interest opportunities, Notre Dame continues to feed fresh blood into that fight.”

How to get involved

Michael Hagerty ’13 J.D. said the humanitarian crisis related to unaccompanied immigrant children is ongoing and KIND is always in need of pro bono attorneys to take cases similar to the one described in this article.

If any of Hagerty’s fellow Notre Dame Lawyers would like to help a child by taking a case, they can get in touch with KIND through the organization’s website or contact Hagerty directly at mhagerty@supportkind.org.