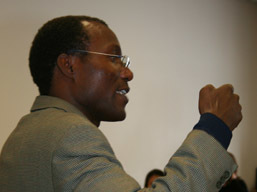 On January 23, the Center for Civil and Human Rights presented a lecture by George Mugwanya ’00 J.S.D., senior appeals counsel for the International Criminal Tribunal for Rwanda. The lecture and discussion provided students and faculty with the opportunity to reflect on the year’s major developments at the ICTR. The tribunal, located in Arusha, Tanzania, was established by the United Nations Security Council in 1994.

Among the topics covered by Mugwanya was the precedent-setting decision of the ICTR Appeals Chamber in the “Media Case” as well as the process by which some cases are being transferred from the tribunal to Rwandan national courts. Mugwanya explained that the tribunal’s November 2007 “Completion Strategy” envisions the termination of all trials by early 2009 and all appeals by 2010, at the earliest.

Before being appointed to his current position, Mugwanya served an internship at the ICTR in 2000. He served as a legal intern from October 1999 to March 2000 while completing his J.S.D. degree. Of his experience, Mugwanya remarked, “Until a permanent international criminal court is established, this UN institution, like the International Tribunal for the Former Yugoslavia, must be credited for playing an important role in bringing to justice offenders who committed crimes in Rwanda in 1994, and for fighting the culture of impunity for violations of human rights.”