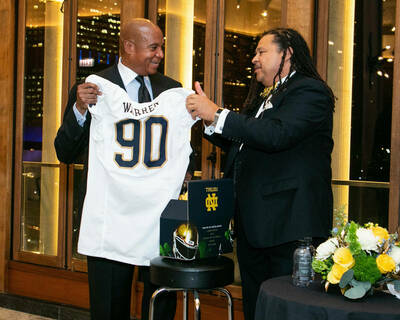 His career has spanned from sports agent, to attorney, to NFL executive. He started his NFL career with the St. Louis Rams in 1997, followed by a stint at the Detroit Lions, and then 15 years in executive positions with the Minnesota Vikings. In 2020, Warren was named the sixth Commissioner of the Big Ten Conference.

Warren and Cole shared a conversation at a Chicago Notre Dame Lawyers event hosted by the Notre Dame Law School, and attended by alumni and students, including many alumni from his law school class. They discussed his path from student-athlete, to ND Law, to Big Ten Conference Commissioner; his perspective on hot-button issues in college athletics today; and what has guided him through a successful career.

Negotiating at an early age

Early in his career, Warren was a sports and entertainment attorney and agent representing various professional athletes, entertainers and broadcasters. However, as Warren explained, his first major negotiation came years earlier when he was almost 11 years old. Recovering from life-threatening injuries when he was hit by car while riding his bicycle, the younger Warren was highly motivated to walk and play sports again. He asked his doctors what was the best thing he could do to assist with his recovery. The answer: swimming. So, he negotiated with his parents to use part of the settlement from the accident to build a pool in their yard. They agreed. He swam in that pool, recovered fully, and went on to play college basketball at the University of Pennsylvania and later on at Grand Canyon University.

Warren spent 15 years with the Minnesota Vikings. He was promoted in 2015 from Vice President of Legal Affairs and Chief Administrative Officer, to Chief Operating Officer. He was instrumental in developing U.S. Bank Stadium and the surrounding area in Minneapolis, and hosting Super Bowl LII in February 2018.

When he was approached to apply for the Big Ten Conference Commissioner job, he said he felt like the time was right to move on.

“It was time for another challenge,” Warren said. “Certain jobs can become a platform for a legacy.”

“My goal is to bring people together to do things that they didn’t think they could do, and to embrace it,” he said.

Student-Athletes are at the center of decisions

For every decision and opinion on which Warren commented—conference realignment, playoff expansion, the ruling on Name, Image and Likeness, or the transfer portal—his remarks always led with what he says is his ultimate goal: doing what is best for the student-athlete.

“Keep the student-athlete in the center of all decisions,” he repeatedly said.

Warren said that The Alliance with the ACC, Pac-12, and Big Ten could help stabilize college athletics because it would enable the conferences to work together. He hopes The Alliance will provide a positive environment to address some of the initiatives he has put forward in the Big Ten, initiatives associated with mental health and wellness, social justice, voter registration, equality and gender equity.

“We need to remember that these are student-athletes, not professionals. They are at college for an education. We must provide an environment where they will primarily receive a first-class education,” he said.Remarking on the playoff expansion, Warren says it should happen for the right reason and with a methodical approach in deciding the right number, time, and structure to best serve the student-athletes and their academic schedule.

However, he is in agreement with the concept of a student-athlete being allowed to earn money from their own name, image, and likeness. He says he is concerned about the athletes' level of understanding about the implications related to this new source of income, and that we should provide education and guidance in that area.

“If they are going to take advantage of it, it is important that we help them learn the language, and be educated about such things as branding, savings, taxes, finances, and investments,” Warren said.

He told the audience how a person’s path is not always linear. There will be curves along the way. He shared the importance of building relationships and serendipity—how it is sometimes that job that you did not get that paves the way for the one you will get. He maintains a sense of gratitude every day and says he would not be here without his faith.

“So many points in time, God winked at me,” he said.

As an 18-year-old college student, Warren had an opportunity to take a look inside the office of U.S. Supreme Court Justice Thurgood Marshall, who was someone he greatly admired. "It was at that moment that I really decided that I wanted to become a lawyer,” he said.

Now he wants to provide opportunities for others, and hopes to inspire them to succeed. “If another young person sees me succeeding as a Commissioner, maybe they will see that they could be a Commissioner too,” Warren said.

He credits his education — his J.D. from Notre Dame Law School, along with his MBA from Arizona State — with preparing him to make hard decisions, and training him to assimilate the available information to make those decisions for the right reasons. He said he is always comfortable in any meeting because he speaks the language, whether law, business, or athletics.

“I wouldn’t be here today without everything I learned at Notre Dame,” Warren said.

He recalled how one time he was studying in the library at the start of a home Notre Dame football game. King came by and told him the books would wait, that he didn’t want to miss out on moments like this, and to get over to the stadium for the game.

“He reminded me at that moment to take advantage of the beauty around me,” he said.

Read more about Kevin’s Warren’s career and time at ND Law, and view pictures from the event on the Notre Dame Law School Facebook page.