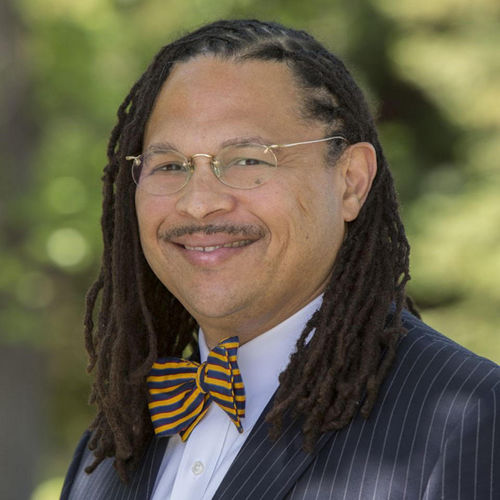 Joseph A. Matson Dean and Professor of Law

G. Marcus Cole is the Joseph A. Matson Dean and Professor of Law at Notre Dame Law School.

He was appointed by University President Rev. John I. Jenkins, C.S.C., and began his term on July 1, 2019. He is the 11th dean in the history of Notre Dame Law School.

Dean Cole is a leading scholar of the empirical law and economics of commerce and finance. He was a faculty member at Stanford Law School from 1997 until he came to Notre Dame. At Stanford, he held two endowed chairs and taught courses in the areas of bankruptcy, banking, contracts, and venture capital. In addition, he served for five years as associate dean for curriculum and academic affairs.

His research has explored questions such as why corporate bankruptcies are increasingly filed in Delaware and what drives the financial structure of firms backed by venture capital. His recent research has involved the ways in which the world’s poor are using technology to solve their own problems, often in the face of government restrictions hindering such solutions.

Before joining the Stanford faculty, he was an associate with the Chicago law firm of Mayer Brown. He clerked for Judge Morris Sheppard Arnold of the U.S. Court of Appeals for the Eighth Circuit.

He has served on the editorial board of the Cato Supreme Court Review, the academic advisory board of BARBRI, the advisory board of the Independent Institute’s Center on Culture and Civil Society, and as a member of the U.S. Court of Appeals for the Ninth Circuit’s Bankruptcy Judicial Advisory Committee. He has served on the boards of several civic and charitable organizations, including those of the Central Pacific Region of the Anti-Defamation League of B’nai B’rith and Businesses United in Investing, Lending and Development (BUILD). He is the former president of the board of directors of Rocketship Education — a national, nonprofit charter school network operating California’s most successful charter schools for low-income children. He has also served on the board of trustees of Bellarmine College Preparatory, the oldest Jesuit secondary school on the West Coast.

Dean Cole earned his bachelor’s degree in applied economics from Cornell University and his juris doctor from Northwestern University, where he served as editor-in-chief of the Northwestern Journal of International Law and Business.