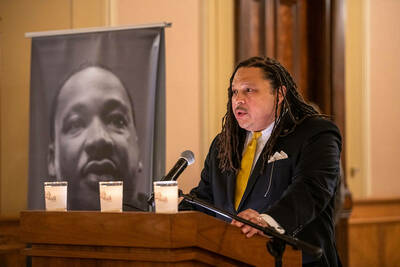 Amid the glow of hundreds of candles in the rotunda of Notre Dame’s Main Building, Joseph A. Matson Dean and Professor of Law G. Marcus Cole spoke at the University’s 2022 Walk the Walk Week prayer service on January 18.

His remarks, a call to action for all to combat racism, are printed below.

The candlelight in this space takes me back to one of my earliest memories as a child. It is of my father’s birthday. Most birthdays are celebrations, and this began as one. My mother had baked a birthday cake for my father, and it was lit by candles. What made this birthday different, however, was that the light coming from those candles became the only light in the room. And from that light, I could see my parents faces. They were filled with fear as our family huddled in the middle of the room.

You see, I grew up in the Terrace Village Public Housing Projects of Pittsburgh’s Hill District. My father’s birthday was April 4, and this particular night was April 4, 1968. It was the day that an assassin violently took Dr. Martin Luther King, Jr. from all of us. The reason why those candles were our only source of light was because our neighborhood erupted in chaos that evening. The power was out, because our neighborhood was on fire. My family lived in a small basement apartment in the projects, with tiny windows at the tops of the walls. We could see the light of the flames outside, but nothing else.

The fear on the faces of my parents, I now know, reflected their uncertainty about our safety, and our future.

The chaos on the streets outside, I now know, reflected a sense of despair, the loss of hope.

The destruction that ensued and lasted for days, and weeks, I now know, has lasted for decades, and in many ways, continues.

We have revisited the chaos and despair of that night countless times since. We have seen the police beating of Rodney King. We have experienced the murder of Trayvon Martin. We saw Eric Garner die at the hands of police. We saw the photographs of Michael Brown lying in a pool of his own blood. And of course, we have all witnessed the murder of George Floyd.

What we have witnessed are the continuing effects of slavery, Jim Crow, lynchings, segregation, and racism throughout our society. Racism is a direct attack on the lives of human beings, each of whom is created in the image and likeness of God. It is an affront to human dignity, the very same human dignity for which we will march later this week, when we mark the 49th anniversary of the Supreme Court decision in Roe v. Wade.

It is the height of hypocrisy for us to march for life of an unborn child, only to turn and look away when that same child is beaten or murdered by a police officer or citizen who perceives that child’s skin color as a threat.

You may not have to live under the constant fear that you or your child will get pulled over and, as a result, never be seen again, but whomever you are, you live in a world shaped by racism. In fact, like it or not, you are shaped by racism. We have all been touched by it. None of us are immune to it. Whether we acknowledge it or not, whether we even realize it or not, we are all victims of racism.

To be absolutely clear, we are not all victims to the same extent. George Floyd, Ahmaud Arbery, Breonna Taylor, Elijah McClain, and Emmett Till all lost their lives to racism.

But if you don’t even know who Emmett Till is, then you too, are a victim of racism. And that’s because your education has been carefully — or carelessly — curated to leave out important parts of American history. Parts that might help you to make sense of the world in which we live. Parts that are true and real, and should not be controversial.

We can place our trust in politics and politicians. If we do, we will be disappointed on a regular basis.

We can place our trust in ourselves. If we do, we might fail on a regular basis, but we know our cause is just, and if we survive our failures, we can keep fighting for it.

Or, we can do what the prophet Elisha did in 2 Kings 6:16. When the King of Aram sent an overwhelming force, Elisha could see God’s unseen force ready to battle on behalf of the Israelites. Elisha assured them, “Fear not, for those that are with us are greater than those that are with them.” Elisha trusted in God, that as he fought, God would make a way for victory.

We are not alone in this fight for a more just world. Our hope is in God the Father, His Son Christ Jesus, and His Holy Spirit.

Dean Cole’s remarks can be viewed in the video below, starting at 12:55.