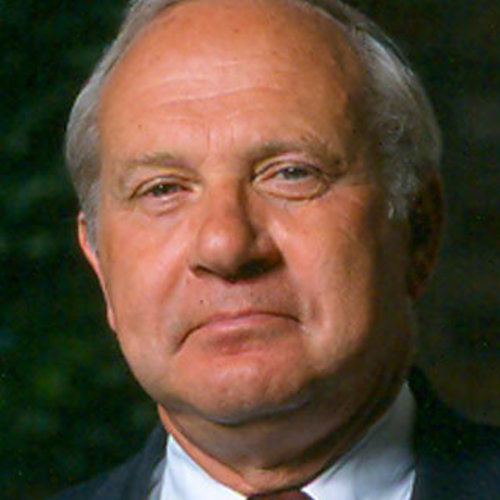 The Joseph A. Matson Dean Emeritus
Professor Emeritus of Law

Dean David T. Link, a member of the Notre Dame Law School faculty since 1970 and dean from 1975 to 1999, enjoyed the longest tenure among American law-school deans until his promotion to dean emeritus. He earned his B.S. magna cum laude and his J.D. from Notre Dame in 1958 and 1961, respectively. While in law school, he belonged to the staff of the law review, Notre Dame Lawyer, and served as chairman of the annual moot-court competition. Admitted to the bars of Ohio, Illinois and Indiana, as well as before the United States Supreme Court, Dean Link has practiced law with the U.S. Treasury Department (1961-66) and with the Chicago law firm of Winston & Strawn (1966-70).

Dean Link spoke and wrote extensively on the topic of professional responsibility for attorneys, and teaches ethics to all first-year law students. He participated in a number of committees designed to encourage a renewed sense of professionalism among attorneys including the ABA Section on Legal Education, Committee on Professionalism (member 1993-97), the Indiana State Ethics Commission (chair 1988-90) and the Society for Values in Higher Education (member since 1980). He was also a noted author in the field of federal taxation.

He had a strong interest in world law and human rights. He held the position as interim director of the University’s Center for Civil and Human Rights, and chaired the World Law Institute, a not-for-profit organization established to sponsor educational programs in fields of law relating to the global economy, world organizations and the emerging world common law.

He actively participated in a number of University committees including the Academic Council, the Provost’s Advisory Committee, and the Athletic-Affairs, Academic Affairs and Faculty Affairs Committees of the Board of Trustees. His community involvement included a number of organizations that provide housing including Habitat for Humanity and the Christmas-in-April program, the South Bend Center for the Homeless (of which he is a co-founder), the Friends of the Homeless Advisory Council (chair since 1995) and There Are Children Here (board member since 1994). He was a longtime member of the Indiana Catholic Conference.