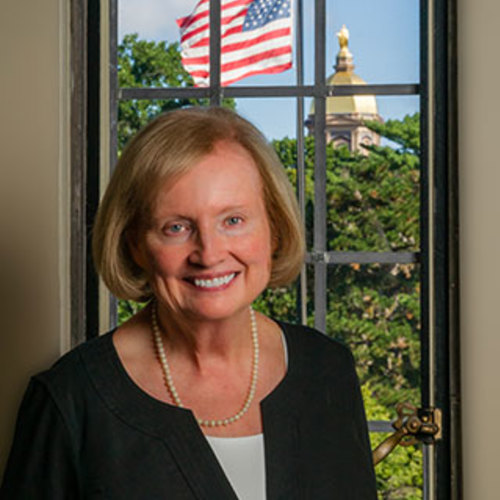 In 1990 the University’s Board of Trustees elected Professor O’Hara as vice president for student affairs, the first woman to serve as an officer of the University. In that capacity, she had oversight responsibility for eleven departments responsible for student life outside the classroom, as well as for the University’s undergraduate residence halls and graduate student housing. She continued to teach at the Law School throughout her tenure in Student Affairs.

In 1999 Professor O’Hara returned to the Law School as dean and served in that capacity for ten years. During her tenure as dean, the $57.6M construction of Eck Hall of Law and renovation of Biolchini Hall were conceived, designed, and funded. Professor O’Hara focused her principal efforts, however, on the members of the Law School community – faculty, staff, and students. She began a research sabbatical program for faculty that was competitive with peer law schools, created an associate dean position to focus on faculty scholarship, and helped lead a reorganization of the Legal Aid Clinic. Mindful of the significant role the Kiley Fellowship played in her own life, she raised significant funds for student scholarships. In addition, the Loan Forgiveness Program began during her tenure.

Externally as dean, Professor O’Hara chaired the Section for the Law School Dean of the American Association of Law Schools (AALS) in 2008, co-chaired the Dean’s Workshop at the 2007 mid-year meeting of the American Bar Association (ABA), chaired the Nominating Committee of the AALS in 2005-2006, and served on planning committees for the ABA’s annual seminar for new law school deans. In addition, she served as a member of the Board of Trustees of the Law School Admissions Council (LSAC) from 2005-2011, chairing the Test Development and Research Committee from 2009-2011 and the 2010 LSAC Nominating Committee. When she concluded her time on the board, she served as Council Secretary from 2011-2013.

Closer to home, Professor O’Hara served as a member of the Lay Review Board for the Diocese of Fort Wayne-South Bend from 2002-2011. She currently serves as a member of the Advisory Board to Notre Dame’s Alliance for Catholic Education and as a faculty fellow in the Institute for Educational Initiatives.

Following her tenure as dean, Professor O’Hara returned to the classroom and taught Business Associations, Securities Regulation, and a seminar on the Law of Higher Education through spring 2020.  Her colleague, Jay Tidmarsh, sponsored her honorary membership in the Notre Dame Chapter of Phi Beta Kappa in 2009.

During her almost 40 years on the faculty, Professor O’Hara received a number of awards recognizing her deep commitment to Notre Dame’s distinctive mission as a Catholic university. The Congregation of Holy Cross presented her with the Howard J. Kenna Award in 1997 and with one of its inaugural Spirit of Holy Cross Awards in 2008. The Notre Dame Alumni Association chose her as the 2010 recipient of the James E. Armstrong Award, and Father John Jenkins honored her with the 2010 Presidential Award. She received the St. Thomas More Award from the Notre Dame Law Association in 2009. The students of the Law School recognized her as the Distinguished Professor of the Year early in her career in 1986, presented her with the Captain William McLean Faculty Award for contributions to the Law School community in 2014, and honored her again as Distinguished Professor of the Year in 2020. Professor O’Hara moved to emerita status at the end of the 2019-2020 academic year.