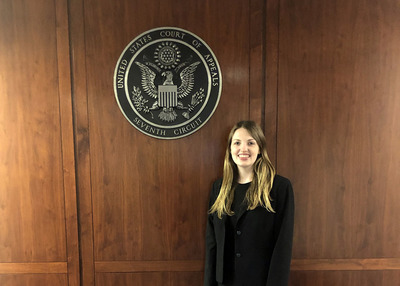 Alyssa McClure ’19 J.D. recently won an appeal in a habeas corpus case that she argued before the U.S. Court of Appeals for the Seventh Circuit through Notre Dame Law School’s Seventh Circuit Practice Externship.

While a third-year law student, McClure was the primary author of the briefs and presented oral argument in the case Portee v. United States. She represented Daniel Portee, who was challenging his enhanced 15-year mandatory-minimum sentence for possession of a firearm by a convicted felon. McClure argued that the district court had not satisfied the criteria needed to impose the enhanced sentence. The Seventh Circuit agreed and reversed the decision in an opinion issued October 18.

“Being part of the Seventh Circuit team was the most rewarding experience of my law school career. I learned an incredible amount about advocacy and creative lawyering through researching, briefing, and preparing to argue a federal habeas case,” said McClure, who is now a federal law clerk in North Carolina. “I would not have been successful without the support of my fellow team members, Professor Bob Palmer, Professor Bob Jones, and the professors and students who helped moot me.”

McClure is one of many Notre Dame Law students who have represented prisoners in direct appeals and habeas corpus proceedings through the Seventh Circuit Practice Externship. The court assigns cases to students who, either as sole counsel or in teams of two, handle all responsibility of the cases from beginning to end. During the yearlong externship, students write all of the briefs and develop their arguments, and then present their oral arguments before the U.S. Court of Appeals for the Seventh Circuit.

Adjunct Professor Robert Palmer, a partner at May Oberfell Lorber who concentrates his practice on appellate law in state and federal courts, has been supervising students in the Seventh Circuit Practice Externship for over 25 years.

“I have never had a student in this program who has performed in less than an exceptional professional manner in their representation of our clients,” Palmer said. “I receive many compliments from judges and the court staff about the performance of our students. This says a lot about our students because we typically handle difficult cases and the pressure of possibly being the last resort for justice for an inmate can be intense. Learning to deal with the pressure is an important part of the program.”