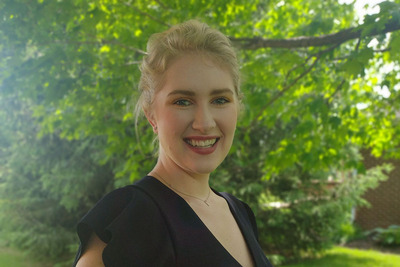 Only one recipient is selected each year from many nominations submitted by members of the Law School community. Mancusi was singled out in nomination comments for her unwavering support and encouragement of others. She has immersed herself fully into life at Notre Dame, and has had a positive and profound impact on her classmates.

The Lardy Award was established by the Notre Dame Law Class of 1975 to honor their beloved classmate Peter A.R. Lardy, who died of cancer during his third year of law school. The award is presented to law students “who exemplify his courage, love, and understanding toward his fellow man,” and includes substantial tuition assistance for the recipient’s third year of law school.

“It was very special for me to be recognized. I love to be involved and I juggle a lot of responsibilities. And it is nice to see that it has had a positive impact on people,” said Mancusi. “You can never fully know how you are perceived, and I am deeply flattered and honored that people thought of me for this award.”

One student said, “I don’t know how I would have survived the first semester of law school without Mary’s support and mentorship. Mary is perhaps the sweetest, smartest, and most successful student I’ve met at Notre Dame. She is a brilliant student who works hard not only for herself, but for other people. Mary wants everyone around her to succeed.”

She says one of the most meaningful experiences at law school so far is being part of the Christian Legal Society, where she served as president this past year. The group meets weekly and Mancusi says the focus is about fellowship and building community.

“We are able to share our faith, while each bringing a different perspective to the group. There is a lot of encouragement and real friendships and connections developed especially between students of different years,” she said.

Professor Bruce Huber is the faculty advisor for the Christian Legal Society. “Mary is a force of nature. She’s a very hard worker and a sharp and careful student. Yet her kind demeanor and infectious smile put others at ease. She is a team player who somehow finds a way to do everything while still saving time for her friends and family,” he said. “Her unflaggingly positive attitude epitomizes the spirit of the Lardy. She truly exemplifies the virtues of kindness, friendship, faith, and warmth.”

Her commitment to students this year was further exemplified by her role as a teaching assistant for Professor Samuel Bray’s Civil Procedure class. She loved being a mentor to students in the class. “It was so rewarding to see the students grow, learn, and figure it out,” she said.

“This past semester, Mary was my teaching assistant for Civil Procedure,” said Bray. “I had a steady stream of students coming to my office to tell me what a wonderful TA she was. I can’t imagine a TA more dedicated and capable and supportive of her students than Mary.”

Students in the class agree. One said, “Mary not only prepares for a weekly TA session and attends the one required class session, she attends ALL of the class sessions. She does this because she goes above and beyond in all she does. She is thoughtful, kind, brilliant, and a great friend. I know I can turn to Mary for any question and she will treat me with dignity, kindness, and generosity. Awarding Mary this scholarship honors Peter’s exemplary life and achievements.”

Mancusi’s path to law school was not conventional. “My journey here was the result of a lot of prayer and taking things one step at a time,” she said.

Mancusi is one of 10 children from Crete, Illinois. After high school, many of her friends were getting married and starting families. But Mary was unsure of what she wanted to do. She decided to get her associate’s degree from Fox College, then began working for Baker McKenzie in Chicago as a legal secretary. It was in that setting where her interest in the law took hold.

“I really liked the environment. I was getting more responsibilities from the partners and associates, but I realized that I didn’t want to be a legal secretary forever,” said Mancusi.

She enrolled in Governors State University. Through online and evening courses, while working full time, she completed her undergraduate degree.

Encouraged by the attorneys at Baker McKenzie, she took the LSAT and started applying to law schools. Once accepted, and after a visit to Notre Dame, she said that she could see herself here.

“The students at Notre Dame were so excited to be here. The alumni were so proud to graduate from here,” she said. She was also drawn to the Notre Dame campus life. “I do all of the things here at ND Law with clubs and activities because I did not get to do them as an undergraduate,” she said.

Professor Lloyd Mayer first came to know Mancusi when she worked as his research assistant. He said he felt strongly enough to — for the first time — write a statement in support of a student’s nomination for the Lardy scholarship “because of the incredible and consistent generosity Mary has shown in supporting her fellow students and the Law School community.”

Mayer continued, “It seems that every week I would see another activity or initiative she is leading that is designed to encourage her classmates, a particularly important task during these difficult, pandemic times. Mary is always striving to support her classmates in a manner that matches the spirit of Peter Lardy. I also have noticed that many times she is in conversations with a wide range of students, showing her commitment to our community extends well beyond formal roles.”

In addition to all of her other activities Mancusi received an invitation to join the Notre Dame Law Review during her second-year. She spent a significant amount that year serving as a staff editor, and this coming year will be the Law Review’s managing print editor.

During her first-year summer, Mancusi worked for Miller Johnson in Grand Rapids, Michigan, and this summer she is a summer associate at Saul Ewing Arnstein & Lehr LLP in Chicago. After graduation she will clerk for Judge John Kness of the U.S. District Court for the Northern District of Illinois.

A list of past Lardy Award recipients is here.