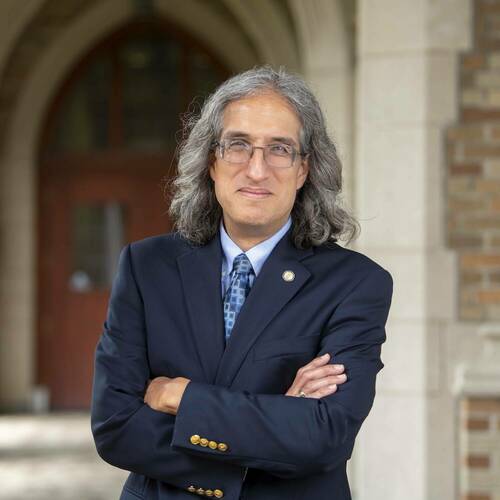 Lloyd Hitoshi Mayer joined the faculty as an associate professor of law in 2005 and became a full professor in 2011. He served as the Associate Dean for Academic Affairs from 2011 to 2015. He earned his A.B., with distinction and honors, from Stanford University in 1989 and his J.D. from Yale Law School in 1994. While at Yale, he was a John M. Olin Fellow in Law and Economics and served as business editor of the Yale Law and Policy Review and as an editor of the Yale Journal on Regulation. Following graduation, he clerked for the Honorable Lowell A. Reed, Jr., United States District Court for the Eastern District of Pennsylvania. He then joined Caplin & Drysdale in Washington, D.C., first as an associate and later as a member, where he concentrated on tax issues, particularly for nonprofit organizations. He teaches courses at Notre Dame Law School in not-for-profit organizations, business enterprise taxation, election law, and professional responsibility.

Mayer's areas of research interest and expertise include advocacy by nonprofit organizations, the intersection of election law and tax law with respect to lobbying and other political activity, federal and state regulation of nonprofits (including churches and other religious organizations), and the role of nonprofits both domestically and internationally.

What Is Caesar's, What Is God's: Fundamental Public Policy for Churches, (with Zachary B. Pohlman), 44 Harvard Journal of Law & Public Policy 145 (2021)

Fiduciary Principles in Charities and Other Nonprofits, in The Oxford Handbook of Fiduciary Law (Oxford University Press 2019)

Globalization Without a Safety Net: The Challenge of Protecting Cross-Border Funding of NGOs, 102 Minnesota Law Review 1205 (2018).

Fragmented Oversight of Nonprofits in the United States: Does It Work? 91 Chicago-Kent Law Review 937 (2016).

'The Better Part of Valour Is Discretion': Should the IRS Change or Surrender Its Oversight of Tax-Exempt Organizations? 7 Columbia Journal of Tax Law 80 (2016).

Limits On State Regulation Of Religious Organizations: Where We Are And Where We Are Going, Columbia University Academic Commons (2013).

The Pulpit, the Pew, and Politics, in BOSTON COLLEGE LAW SCHOOL LAW & RELIGION PROGRAM, ELECTING FAITH: THE INTERSECTION OF LAW AND RELIGION IN POLITICS AROUND THE WORLD (2009) (symposium publication)

Serving on a Nonprofit Board: Legal and Ethical Duties in an Age of Accountability, as an appendix in JOHN TROPMAN & THOMAS J. HARVEY, NONPROFIT GOVERNANCE: THE WHY, WHAT, AND HOW OF NONPROFIT BOARDSHIP (Corby Books & University of Scranton Press, 2009)

The Legal Rules for Policy and Civic Impact by Foundations, in POWER IN POLICY: A FUNDER'S GUIDE TO ADVOCACY AND CIVIC PARTICIPATION (David F. Arons ed., 2007): 169-205.

Trump Giving "Political Speech" to Judicial Watch, Which is Not Supposed To Do Politics, Yahoo! News, Jan. 19, 2023

Churches are breaking the law and endorsing in elections, experts say. The IRS looks the other way. Texas Tribune and ProPublica, Oct. 30, 2022.

Ken Griffin Spent $54 Million Fighting a Tax Increase for the Rich. Secret IRS Data Shows It Paid Off for Him. ProPublica, July 7, 2022.

How a Secretive Billionaire Handed His Fortune to the Architect of the Right-Wing Takeover of the Courts, ProPublica, August 22, 2022

What would it take for the NRA to lose its tax-exempt status?, Marketplace, June 9, 2022

She Helped Create the Big Lie. Records Suggest She Turned It Into a Big Grift., Reveal News, June 8, 2022

Black Lives Matter mansion is symbol of waste and corruption, say critics, The Times, May 20, 2022

Black Lives Matter's National Organization Opens Its Books. What Do They Reveal?, New York Magazine, May 20, 2022

Convenient but susceptible to fraud: Why it makes sense to regulate charitable crowdfunding, The Conversation, December 17, 2021

Moms for Liberty: Despite nonpartisan claims, army of activists a political force in 2022, TP Palm, December 8, 2021

This Breast Cancer Charity Is the Big New 'Scam' in Politics, The Daily Beast, October 15, 2021

Texas has raised $54 million in private donations for its border wall plan, The Texas Tribune, October 6, 2021

Survey:Nearly 1 in 3 contribute to a crowdfunding drive, Associated Press and The Chronicle of Philanthropy, April 13, 202

A Philanthropist's Plan to Get the Wealthy to Give More Faces Headwinds, The Chronicle of Philanthropy, October 8, 2020

'I've never seen anything like this': Kansas Senate candidate under fire for mixing religion, politics, The Topeka Capital-Journal, September 25, 2020