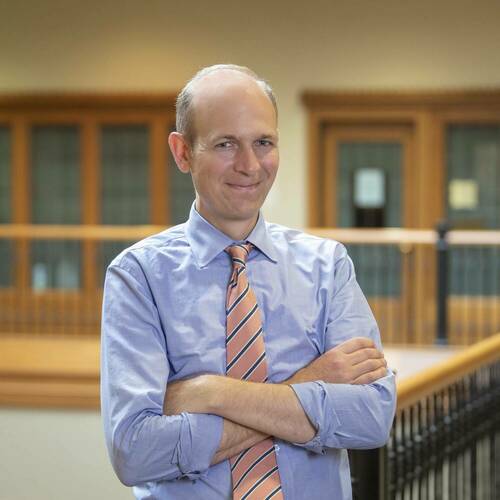 Professor Samuel L. Bray joined the Notre Dame Law School faculty in 2018. His primary areas of research are remedies and equity. His recent work includes “Getting into Equity,” Notre Dame Law Review (forthcoming 2022) (with Paul B. Miller); “Debs and Federal Equity Jurisdiction,” Notre Dame Law Review (forthcoming 2022) (with Aditya Bamzai); “Equity, Law, and the Seventh Amendment,” 100 Texas Law Review 467-517 (2022); “The Mischief Rule,” 109 Georgetown Law Journal 967 (2021); and “Against Fiduciary Constitutionalism,” 106 Virginia Law Review 1479 (2020) (with Paul B. Miller); as well as chapters in the following books: Oxford Handbook of Christianity and the Law (forthcoming 2022); Oxford Handbook of New Private Law (2021); Philosophical Foundations of the Law of Equity (2020); Equity and Law: Fusion and Fission (2019); and Oxford Handbook of Fiduciary Law (2019). His books, with various coauthors, include four editions of The Constitution of the United States; two editions of Ames, Chafee, and Re on Remedies; Genesis 1-11: A New Old Translation for Readers, Scholars, and Translators; and The 1662 Book of Common Prayer: International Edition. Bray is a faculty fellow of the Notre Dame Program on Private Law, a faculty fellow of the Notre Dame Law School Religious Liberty Initiative, and a McDonald Distinguished Fellow at the Center for the Study of Law and Religion at Emory University. He is an adviser on the Restatement (Third) of Torts: Remedies, and is a member of the Advisory Committee for Rules of Procedure for the United States Court of Appeals for the Seventh Circuit. He has testified before the Senate Judiciary Committee, the House Judiciary Committee, and the Presidential Commission on the Supreme Court of the United States.

Bray is a graduate of the University of Chicago Law School, and he clerked for then-Judge Michael W. McConnell on the U.S. Court of Appeals for the Tenth Circuit. After clerking, he practiced law at Mayer Brown LLP, was an associate-in-law at Columbia Law School, and was executive director of the Constitutional Law Center at Stanford Law School. Bray was an assistant professor of law at UCLA from 2011 to 2016, and a professor of law from 2016 to 2018, and during the 2016-2017 academic year he was a Harrington Faculty Fellow at the University of Texas-Austin.

“Form and Substance in the Fusion of Law and Equity” in Philosophical Foundations of the Law of Equity (Dennis Klimchuck, Irit Samet, and Henry Smith eds., 2020), 231-239

A Response to The Lost History of the 'Universal' Injunction (guest blog for Notice & Comment), Yale Journal on Regulation, October 18, 2019

Judges Shouldn't Have the Power to Halt Laws Nationwide, The Atlantic, October 31, 2018

When District Judges Try to Run the Country, The Wall Street Journal, July 17, 2018