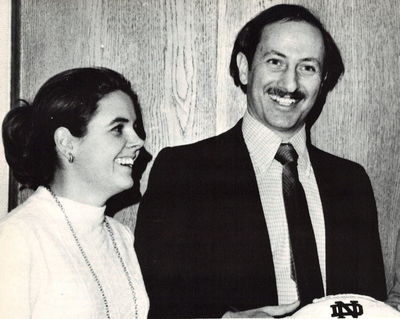 Notre Dame Law School recognizes its students’ outstanding academic achievements with an array of prestigious awards. In classic Notre Dame fashion, however, one of its most beloved and unique annual awards can be earned only by being an exceptionally good and kind person.

The Lardy Scholarship Award was established by the Class of 1975 to honor classmate Peter A.R. Lardy, who died of cancer during his third year of law school. Every year the award is given to a second-year student who best exemplifies Lardy’s “courage, love, and understanding toward his fellow man.” It includes a substantial tuition remission for the recipient’s third year of law school.

For more than four decades, the scholarship has enabled Lardy’s remarkable character and kindness to continue influencing the Law School community. Each year, students nominate a classmate who they feel is deserving of the scholarship, and the Law School celebrates the recipient with an announcement during the spring semester.

The Class of 1975 continues to fundraise for the Lardy Award. Every classmate is contacted each year and reminded of the opportunity to send in their annual contribution to the scholarship. The results have been impressive, and the class is determined to continue increasing the number of contributors to help strengthen the fund. It turns out that this endeavor has had the added benefit of keeping the Class of 1975 a close-knit group.

Class President Pete Shirk ’72, ’75 J.D. notes, for example, that “we had the largest attendance for our 40th in the history of the Law School — at least double any prior attendance mark — and at each reunion we always make special comment about supporting the scholarship.”

Jack Garbo ’75 J.D. agreed with Shirk that the memory of Peter Lardy remains a powerful cohesive force for the class.

“I, along with most of our classmates, knew Pete on a personal level. He was humorous, incredibly intelligent, engaging, yet very humble,” Garbo said.

“Some of the most meaningful memories I have actually come from the many visits many of us made to be with Pete while he was in the hospital,” Garbo added. “Two or three of us would show up at a time, and you would think we were at a house party. We would sit against the wall just shooting the breeze, and we usually stayed longer than the nurses desired. Pete’s demeanor was always affable, encouraging, and he kept us laughing.”

“Peter’s accomplishments as an excellent student, highly competent editor, and potentially superb trial lawyer may in time be forgotten,” the editors wrote. “What will remain and be remembered, most simply and yet most profoundly, is Peter the friend. His ability to accept his friends in spite of their faults drew out the good in each of them. Peter never stopped giving of himself. Even in the hospital, he took it upon himself to make his friends comfortable, to entertain them, to be more concerned about them than about his own problem.”

The first Lardy Award winner, John Ready ’66, ’77 J.D., recalls being totally “surprised, honored, and humbled” upon learning he was receiving the award. He says that to this day he has no idea who nominated him or why.

Some of the personal qualities that struck Ready’s classmates may be inferred, however, from the fact that he was and remains a deeply spiritual person from a Notre Dame family. (His father and three brothers all graduated from Notre Dame.) Being a Holy Cross Brother from 1961-1970 and several years older than the rest of his classmates likely helped shape his perspective on the pressures of law school as well.

“One thing sticks in my mind,” said Ready, who returned to his hometown of Monroe, Michigan, to practice law after graduating from Notre Dame Law School. “When I was back on campus for our class reunion, I ran into Professor (Bob) Rodes. I remember being surprised that he remembered me right away, and then I was even more touched when the first thing he said to me was, ‘You were our first Lardy Award winner!’ It reminded me how much the award still means to Notre Dame, and what an honor it was to be selected.”

Victoria Kelley, the award winner for the 2020-21 academic year, is the 45th student to be provided tuition assistance by the scholarship.

Garbo said he has just one request of students who benefit from the Lardy Scholarship: “Please remember that Pete was someone who you would be proud to call your friend.” And in return, Garbo said, “If I know Pete, I’ll bet he is extremely happy that the scholarship has helped so many deserving law students, and he is very, very proud of each and every one of you.”