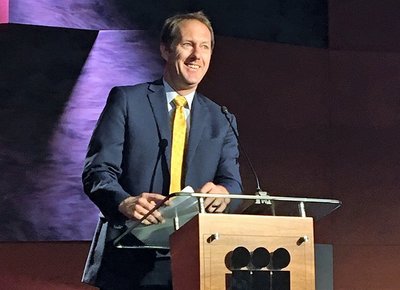 Two years ago, Notre Dame Law Professor Roger Alford was called upon to serve in a leadership role in the Antitrust Division of the U.S. Department of Justice. This fall, he returns to teaching at the Law School, where his DOJ experience will benefit students and provide fodder for new research and scholarship.

In his appointed role as Deputy Assistant Attorney General for International Affairs, Alford was responsible for managing the Antitrust Division’s international work, including developing policy on issues of international antitrust enforcement and promoting the enforcement of antitrust laws around the world.

His team was tasked with drafting the competition chapter of the United States-Mexico-Canada Agreement (USMCA), also known as NAFTA 2.0.

The DOJ led a successful campaign to establish globally accepted standards for due process in competition law enforcement proceedings. Alford delivered more than two dozen speeches in 13 countries as part of the campaign. The agreement, known as the ICN Framework for Competition Agency Procedures (CAP), has been signed by competition agencies from more than 70 nations. By signing the CAP, agencies guarantee that they will respect fundamental due process norms, including nondiscrimination, transparency, right to counsel, notice and opportunity to defend, confidentiality, and judicial review. 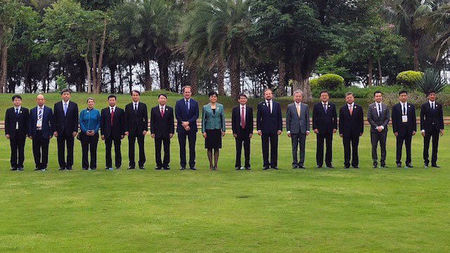 During his U.S. Department of Justice service, Professor Roger Alford delivered more than two dozen speeches around the world, including at the 2019 China Competition Policy Forum in Hainan. 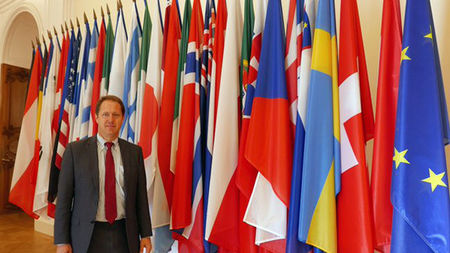 Professor Roger Alford is pictured at the Organisation for Economic Co-operation and Development in Paris, where he attended the 2017 Global Strategy Group Meeting.

Alford, who joined Notre Dame Law School’s faculty in 2012, has focused on international business law throughout his career. “I was teaching full time for 17 years before taking the post with the DOJ,” he said. “It was beneficial to work at a senior level in government in an area of great importance to the economy. This is an area where law and economics intersect.”

G. Marcus Cole, the Joseph A. Matson Dean and Professor of Law at Notre Dame Law School, emphasized the indirect benefits to students of learning from Alford’s role on the world stage.

“More importantly, consumers and companies around the world will benefit for generations to come from the groundbreaking work Roger did while at the division,” Delrahim said. “Roger’s expertise in international law and legal procedures made him the perfect choice to lead the United States’ effort at creating international consensus and enforcement mechanisms to ensure due process for companies facing competition law inquiries around the world. His dedicated and skillful leadership was pivotal in achieving the first-of-its-kind Framework on Competition Agency Procedures. The international business and competition law communities owe him a debt of gratitude.”

Globalization and the proliferation of market economies since the end of the Cold War have raised the need for globally accepted standards for due process in competition law enforcement proceedings. The number of countries with competition agencies has increased from around 25 in the early 1990s to more than 140 today. The DOJ’s goal was to promote the rule of law in this area. “There are more and more agencies around the world that are active in enforcement. There was a demonstrated need to establish fundamental due process as an international minimum standard in competition enforcement,” Alford said.

In addition to his work on due process, Alford spent significant time addressing competition authorities’ enforcement actions against technology companies such as Google, Facebook, Amazon, Apple, and Qualcomm. “There is tremendous interest in the special problems that arise in digital markets,” he said. “Tech companies present novel issues for antitrust authorities around the world.”

“Without this and his pragmatism, energy, and enthusiasm driving the CAP project, it is most unlikely that it would have been possible to have established the CAP framework so quickly,” Bezzi said. “It is a framework which for the first time articulates shared principles of procedural fairness to which CAP participants aspire. More than 70 participating agencies have endorsed the principles and joined the framework. Roger is entitled to be very proud of the establishment of this very successful framework. It is a powerful legacy of Roger’s contribution to the Antitrust Division and the work of the International Competition Network.”

Alford said he is looking forward to teaching Global Antitrust in the spring 2020 semester. This will be the first time the course has been offered at Notre Dame Law School. “The nature of antitrust in the modern era transcends borders,” he said.

Notre Dame Law students will also have an opportunity to hear from Assistant Attorney General Delrahim when he visits the Law School on October 11. He spoke at the Law School previously at the beginning of the fall 2018 semester, when he delivered a lecture on applying antitrust law to college and professional sports.