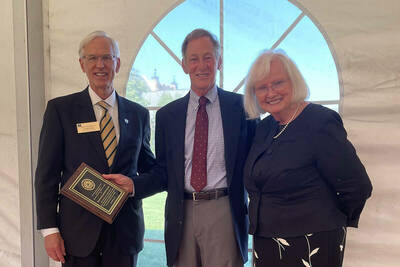 Professor of Law Emeritus Joseph Bauer received the Father Michael McCafferty Award from the Notre Dame Law Association on October 1. The award was presented to Bauer by Thomas D. Schroeder ’84 J.D., president of the NDLA Board, at a lovely luncheon during the board’s fall meeting.

The McCafferty Award is given to a Notre Dame Lawyer or Notre Dame faculty member who has rendered distinguished service to Notre Dame. The award is named for Rev. Michael D. McCafferty, C.S.C. — also known as Father Mike — a popular and highly respected teacher at Notre Dame Law School whose life was shortened by cancer.

Bauer joined the Law School faculty in 1973 and has served as a role model for generations of Notre Dame Lawyers. He also worked alongside Father Mike as a colleague and friend. During his time at Notre Dame, Bauer served as associate dean three times, was the co-director of the London Law Program, and was an elected representative to the Provost’s Advisory Committee. He also served as elected vice chair of the Law School’s Appointments Committee for more than 10 years, and as vice chair of the Law School’s Promotions Committee.

He earned his bachelor’s degree from the University of Pennsylvania and his J.D. from Harvard Law School. He worked as an associate at Kaye, Scholer, Fierman, Hays & Handler in New York before coming to Notre Dame. He retired as a full-time faculty member in 2015.

Bauer’s students valued and remembered his sense of humor, personal interest in students and commitment to the ideal that the Notre Dame Law School community is strongest when it welcomes students of all faiths.

“Father Mike was both a good friend and a valued colleague. His untimely death was a terrible loss to Notre Dame and to the many people whose lives he touched. I am both honored and humbled to have received this award named after him,” said Bauer.

Professor of Law Emerita and former dean Patricia O’Hara, who worked alongside Bauer and McCafferty for many years, spoke about Bauer at the ceremony.

“Joe Bauer deserves recognition on many fronts, but his selection for the McCafferty Award is particularly appropriate. Father Mike played a pivotal role in creating the sense of community within the Law School that we prize today. He was like the hub of a wheel connecting people from many different backgrounds. Similarly, while Joe was a beloved teacher and highly-regarded scholar, he was at his best as a colleague,” said O’Hara.

“Like Father Mike, Joe was a community builder,” O’Hara continued about Bauer. “He expressed his views but welcomed differences, extended himself to others across political, ideological, and religious lines, bridged divides, and respectfully pushed for common ground. May we always be blessed with faculty who invest their life’s blood in strengthening our bonds as a community.”

In addition to his colleagues, Bauer’s wife, Marzy, and children, Deborah and David, joined the NDLA Board at the award luncheon to celebrate his 42-year tenure as a beloved and respected professor of Notre Dame Law School.