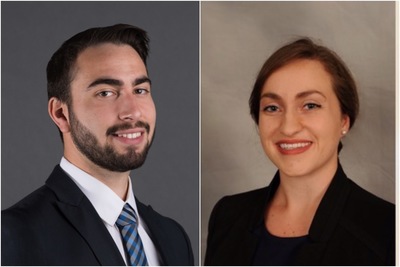 The fellowship covers the cost of salary and benefits for Notre Dame Law graduates to work for two years at a nonprofit, 501(c)(3) organization providing legal services to low-income or other underrepresented populations. Through the Thomas L. Shaffer Public Interest Fellowship, named in honor of professor emeritus and former dean, Thomas L. Shaffer, fellows select the organizations where they will work and design the projects they will undertake at those organizations.

Leinz will work on wrongful conviction cases with the Arizona Justice Project. Its mission is to represent Arizona inmates with claims of actual innocence or manifest injustice where convictions were based on invalid scientific evidence. His particular focus will be on exonerating wrongfully convicted mothers.

“I am so grateful to Notre Dame Law School for this opportunity to help remedy injustice done to people who have done nothing wrong, and for the chance to work for an organization that is willing to take on and win tough cases rather than just taking DNA cases,” said Leinz.

His first thought of practicing post-conviction law occurred during his 1L year when he became involved with the Notre Dame Exoneration Project. He currently serves as vice president of litigation for the Exoneration Project. As part of that role he chairs the intake committee, which reviews letters sent from inmates requesting help and develops intake and investigation policies for the incoming requests.

He has also been enrolled in the Law School’s Wrongful Conviction Externship every semester since its inception in the fall of 2018. He continues to work on the case that he was assigned when he first joined the Exoneration Project and says that he hopes his client is free before he leaves to work with the Arizona Justice Project.

“I was never sure about anything career-wise before I started working on that case—I wasn’t even sure that attending law school was the right career decision at that point. Within a couple months, however, I knew that the work I was doing was what I wanted to do for the rest of my life,” said Leinz. “To me, wrongful convictions are one of the areas of law where a single lawyer can most profoundly alter the course of many lives. Without post-conviction counsel, most innocent inmates will remain behind bars, but if innocence attorneys do their job right, in most cases, they should be able to prove their client's innocence.”

Leinz received his undergraduate degree from the University of California, Los Angeles.

Schreiber will work with Catholic Charities of America, Legal Services for Immigrants Program providing legal services to Rohingya refugees in Milwaukee, which has the largest community of Rohingya refugees in the United States. The Rohingya face particular difficulties with the transition to citizenship. They do not have a written language, which makes it more difficult to learn English and pass the language, general history, and civics tests required to gain American citizenship. Schreiber will work with other graduate language students to create a system that better caters to the needs of this community.

“We plan to create a bridge to their community without the limitations the current system has created for them,” said Schreiber. “I will be heavily focused on the transition to citizenship. It is really important that they apply for citizenship, but for outsiders to try to navigate and understand the legal process of a new country, especially in a country that has such strict requirements and a much more sophisticated government than what they are used to, is extremely difficult.”

Her passion for nonprofit work and immigration law began during her 1L summer when she worked at Journey’s End Refugee Services in Buffalo, N.Y., where she reviewed clients’ claims and helped them apply for asylum and obtain green cards and worker permits.

“It was really hard work, but I have never felt more fulfilled than when I was helping these people who have experienced serious trauma find a new home. The gratitude that I felt from them was constant and the work had such an impact on me I decided to continue in immigration law,” said Schreiber.

She spent her second year of law school in the Notre Dame London Law Program, where she interned at a nonprofit organization and an immigration firm. She also participated in the Law School’s National Immigrant Justice Center Externship and helped represent a client who was seeking asylum.

Schreiber found that she really valued client interaction so she decided to apply for a fellowship with Catholic Charities.

“The people I have worked with there have been so passionate about their work, I knew it would be a wonderful opportunity,” she said. “To me, America is still that country that offers a new life for anyone. I want to help those who have left everything for just the chance for a better life,” said Schreiber.

She earned her undergraduate degree from St. Norbert College.

Leinz and Schreiber are in the 10th class of Thomas L. Shaffer Fellows, continuing a long tradition of public interest at Notre Dame Law School.

Since the Shaffer Fellowship launched in 2011, the Law School has selected 20 fellows to complete projects at organizations across the United States in cities such as Chicago, Houston, Los Angeles, Philadelphia, Pittsburgh, and Washington, D.C.

The fellowships are named in honor of Thomas L. Shaffer ’61 J.D., who was a longtime faculty member and former dean at Notre Dame Law School. During his tenure, he was a supervising attorney in the Notre Dame Legal Aid Clinic, now called the Notre Dame Clinical Law Center, where he taught clinical ethics and guided the legal practice of law students who serve underprivileged people in the South Bend area.

A committee of Notre Dame Law School faculty members selects the recipients of the Shaffer Fellowships.