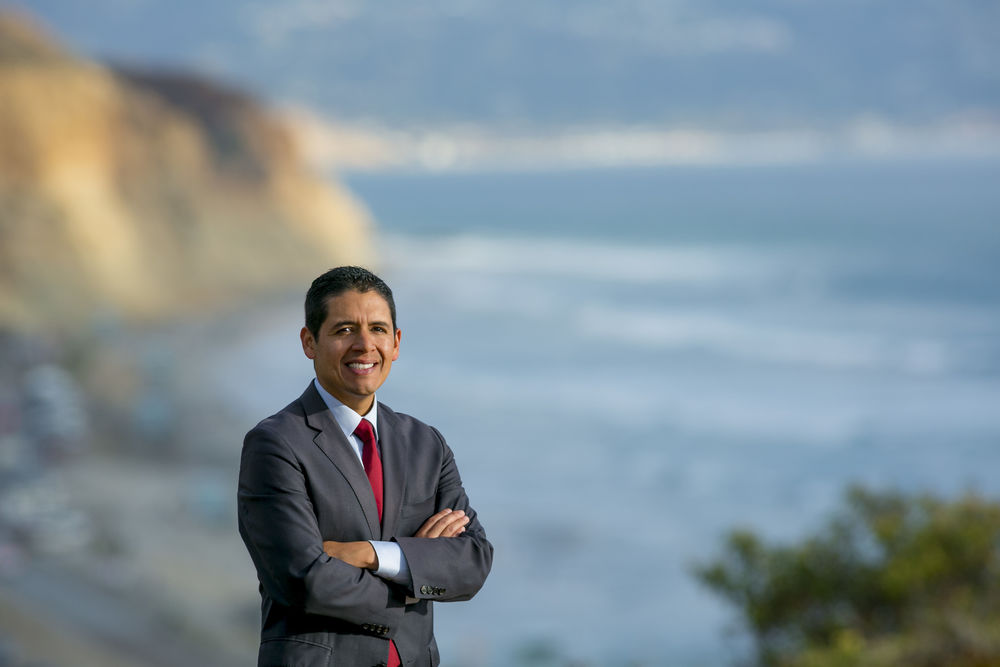 Most law schools are regional in nature. They attract applicants who live nearby or want to work in the market where the school is located. 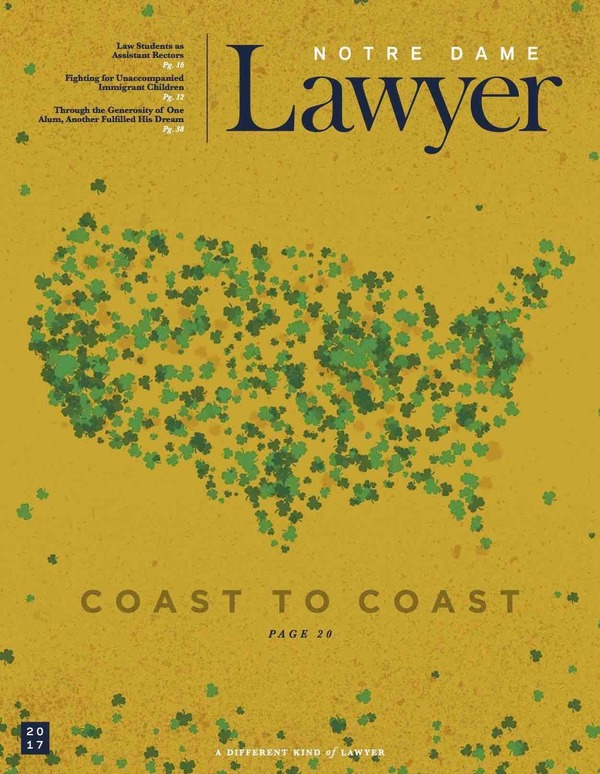 This article was the cover story in the 2017 edition of Notre Dame Lawyer magazine.

It attracts students from throughout the United States and abroad, and the Law School’s alumni work across the map.

According to statistics from the American Bar Association, Notre Dame Law School alumni who graduated between 2012 and 2016 are more widely dispersed than their counterparts from any other U.S. law school.

The top three states where Notre Dame Law graduates are employed – Illinois, California, and New York – literally stretch from coast to coast. And those three states are home to only 38 percent of recent graduates. By comparison, the top 30 law schools overall in U.S. News & World Report’s rankings see about 70 percent of their graduates concentrate in just three states. The average for all U.S. law schools is 85 percent.

Notre Dame Law students benefit from this geographic diversity because they end up connected with an alumni network and opportunities that enable them to go anywhere and do anything.

“There are two institutions that have led to the most opportunities for me in my career – one is the Department of Justice and the other is Notre Dame,” said Juan Castaneda, ’05 J.D., a former assistant U.S. attorney who now has his own law practice in San Diego.

“They provide instant credibility and a certain level of cachet,” Castaneda said. “Notre Dame’s reputation is international, and time and time again it has opened doors for me.”

But having a national – and international – network of alumni poses a challenge, too.

How does a community that is spread across so much geography stick together and maintain its ties with a campus in northern Indiana?

In recent years, Notre Dame Lawyer Committees have become one of the keys to connecting alumni with each other and helping current students gain a foothold in their target markets.

The committees have proliferated since the Notre Dame Law Association launched the initiative in 2013. There are now more than 30 Notre Dame Lawyer Committees in 20 states plus Washington, D.C. 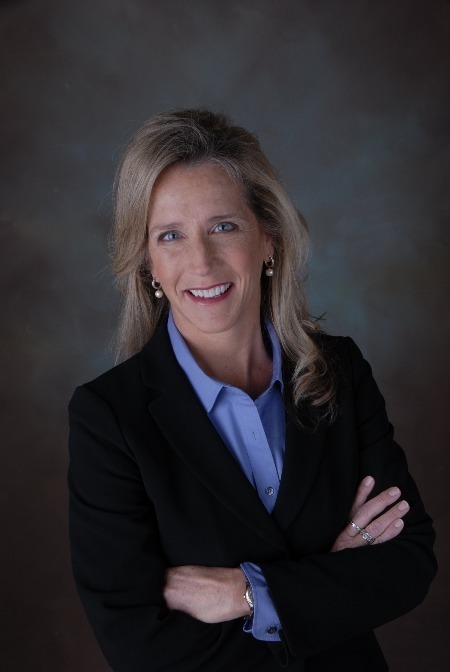 Beth Schneider Naylor, ’86 J.D., a member at Frost Brown Todd Attorneys in Cincinnati, was NDLA president at the time it launched the committee initiative. She said it was a response to the sudden difficulty that law students – even from top-tier schools like Notre Dame – were experiencing on the job market during the Great Recession.

“We decided we needed some sort of infrastructure to support students, and we knew it needed to be centered around people in the legal profession,” Naylor said.

A group of Notre Dame Lawyers in Cleveland provided the successful model.

Since 2006, the Notre Dame Club of Cleveland’s Lawyers Alumni Committee had been promoting participation in the Law School’s public service internship program and managing a network to introduce Notre Dame Law students and graduates to lawyers – and career opportunities – in the Cleveland area.

The NDLA Board invited the Hon. William H. Baughman Jr., ‘74 J.D., of the U.S. District Court for the Northern District of Ohio, and Assistant U.S. Attorney Michael Sullivan, ’85 B.A., from the Northern District of Ohio, and Cleveland attorneys Ray Marvar, ’79 J.D., and Brian Roof, ’94, ’99 J.D., to a board meeting in 2012 to give a presentation on the Cleveland committee’s structure. Then board members worked with the Law School’s Career Development Office to identify the top markets where students wanted to work, so the board members could contact alumni in those cities about starting committees. And, finally, the NDLA assembled an online toolkit and how-to guide to help other Notre Dame Lawyers form committees in their cities.

One of the Cleveland Committee’s ongoing projects has been maintaining a contact list of local Notre Dame Lawyers and making the list available to Notre Dame students and alumni.

Philomena O’Hare, ‘12 J.D., put that list to good use as a law student by asking lawyers to meet with her during breaks from school. "I never had a single attorney say ’no’ to me," she said.

Now O’Hare, despite being a busy mother and practicing attorney, repays those favors. She makes time for current students and assists with the Cleveland Committee’s holiday mixer and summer picnic, which usually draws about 70 people, as well as a mentoring program that pairs students with two or three Notre Dame Lawyers in their fields of interest.

“I think we all get that sense of giving back from Notre Dame,” she said.

The New York group organizes activities like mock interviews for Notre Dame Law students who want to work in New York and a gathering during winter break for students participating in the Law School’s GALILEE program in New York. The committee draws hundreds of people to its annual June reception.

One of the newest committees is in Portland, Ore. The Portland Committee’s kickoff event, which featured a First Amendment presentation from Professor Rick Garnett, drew about 40 people in June.

“People all seemed to share the same realization – there are a lot of us here in Portland, and we didn’t necessarily know each other,” said Kevin Kress, ’05 J.D., who was involved in organizing the Portland Committee. “Some people who had worked together before didn’t realize they had a Notre Dame connection in common.” 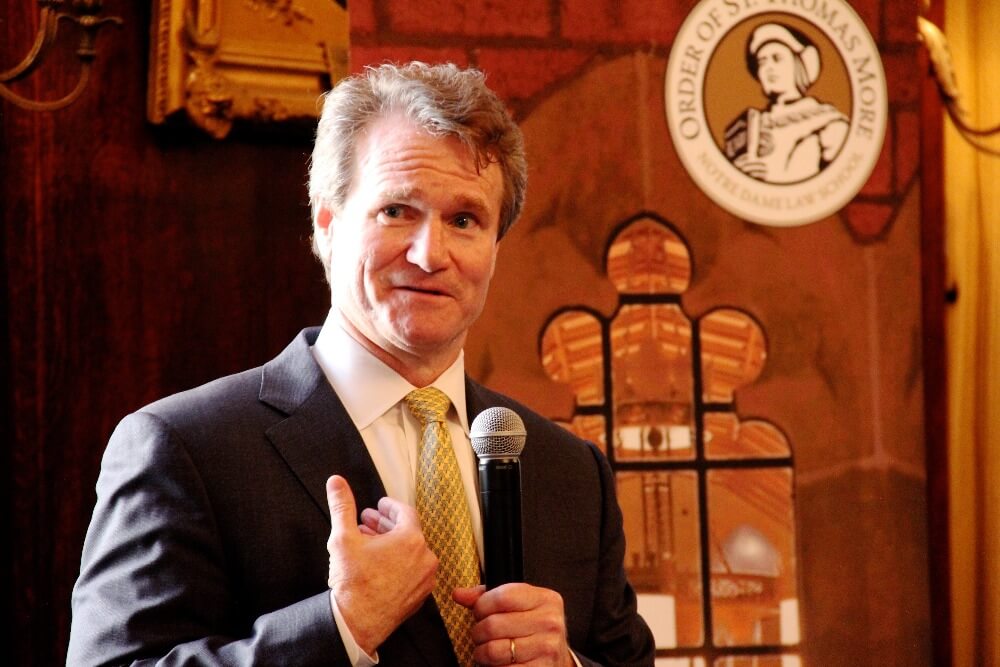 Bank of America CEO Brian Moynihan, ’84 J.D., speaks in June 2016 to an audience of more than 200 people at the annual Notre Dame Lawyers of New York City Reception at the Union League Club.

As the committees have increased in number, they have also broadened their activities beyond the original networking and career-centered focus. Committees host Law School faculty members for Hesburgh Lectures and organize events where alumni can earn continuing legal education credits, participate in pro bono work and other community service projects, and raise money for scholarships.

“People are hungry to connect with each other,” said Maureen Watz Gornik, ’83, ’86 J.D., deputy-in-charge at the U.S. Court of Appeals for the 8th Circuit in St. Paul, Minn.

“The goal in starting these is to help the Law School – to funnel good students to the Law School and help students with their job placements,” Gornik added. “And, out here, it’s to help alumni network for social reasons and for business – anything to tie their Notre Dame family together.”

Castaneda said the San Diego Committee, formed in 2015, organizes monthly events with speakers and breakfasts where people can meet for conversation. The committee organizes a few happy hours annually with one marquee event – such as a panel of Notre Dame alumni in sports that was held at Petco Park, home to Major League Baseball’s San Diego Padres. Castaneda said 70 to 90 people attend the marquee events.

The committee also set up “trinities” where three Notre Dame Lawyers in the San Diego area are matched to meet for lunch with each other. “At the trinities, people really get to know each other,” Castaneda said. “That cements relationships.”

In Denver, the Colorado Committee participates twice per year in Law Line 9 – an outreach effort organized by the local NBC affiliate where Notre Dame Lawyers field calls from viewers on any number of legal topics. The committee also sponsors summer stipends for Notre Dame Law students to work in Colorado Legal Services and organizes regular mixers, including its famed St. Patrick’s Day party, where alumni and students can network.

“Out here, we sort of view it like an Inn of Court,” said Brian Bates, ’79, ’86 J.D., of the Colorado Committee. “It’s been really good to get to know other Notre Dame Lawyers because of the background we all share.”

Connect with the ND network

Visit the alumni page to learn more about how you can get involved with the Notre Dame Law Association and Notre Dame Lawyer Committees.

The NDLA and the committees are open to Notre Dame Law School graduates and all lawyers who have earned another Notre Dame degree.

There are more than 30 committees in 20 states and Washington, D.C. If your city doesn’t have a Notre Dame Lawyer Committee, but you’d like to start one, contact Alumni Director Tammye Raster, ’92 J.D., at traster@nd.edu.

Benefits of the network

Chris Avila, ’11 J.D., said the Lawyers Committee in Miami has provided a great opportunity to connect with the Law School as well as with other Notre Dame Lawyers. Professors Rick Garnett and John Nagle have both delivered Hesburgh Lectures to the Miami group.

Avila, who is originally from Miami, said Notre Dame’s national character was one of the reasons he decided to go to the Law School. He was confident that Notre Dame’s network would help him land a job back home in Miami after graduation.

“Notre Dame has a very strong alumni community, but you’re only in that community if you show up,” he said. “The more you participate, the more you can benefit from it.”

Kress, the Portland attorney, grew up in Louisiana and said one of the reasons he chose Notre Dame was that it would enable him to find job opportunities across the country. "I hadn’t decided where I wanted to practice,” he said, “so it was a plus to know there was a national alumni network that would open doors.”

Bates, in Denver, grew up in Toledo, Ohio. “The network very much helped me in terms of looking for work,” he said. “I was not interested in going back to Toledo or even going to Chicago. I was looking to go west.”

The national, and international, character of the Law School also offers benefits beyond networking for career opportunities. Looking back at their time as law students, alumni say Notre Dame’s geographic diversity enriched their experiences socially and in the classroom.

“I think the national character of the Law School gave me a broader mindset, because I was exposed to so many people who had vastly different experiences where they grew up and think in different ways,” she said. “It forces you to think about things from several angles. That helps me in my practice now.”

Gornik, from the Minnesota Committee, said she also continues to see the benefits of the Law School’s national character.