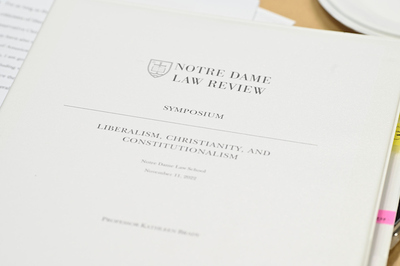 The Notre Dame Law Review hosted its second symposium of the academic year on November 11 in Biolchini Hall of Law. The Law Review’s Issue 4 symposium, co-sponsored by the Program on Church, State & Society at Notre Dame Law School, revolved around the theme of “Liberalism, Christianity, and Constitutionalism.” The event featured several panelists from across the country and from a range of disciplines, including law, religion, economics, philosophy, politics, international relations, and business. The panelists offered insights on early drafts of their written scholarship that delve into the dynamic relationship between liberalism and religion. Their articles will appear in Volume 98, Issue 4 of the Notre Dame Law Review.

“I thought that this topic was a little more philosophical. The topics of liberalism and religion require more theoretical discussion,” said Courtney Klaus, a third-year student at Notre Dame Law School and managing symposium editor of the Law Review. Some of the topics that were discussed in depth at the symposium include natural law, parental rights, liberal economics, and orthodoxy.

The symposium consisted of three panel discussions. The first discussion, “Liberalism and Christianity in Theory,” was moderated by Professor Paolo Carozza and included Nathan S. Chapman of the University of Georgia School of Law, Andrew M. Koppelman of Northwestern Pritzker School of Law, Brandon Paradise of Rutgers Law School, and Rev. Dr. Sergey Trostyanskiy of the Institute for Studies in Eastern Christianity.

The second panel discussion, “Liberalism and Christianity’s Response,” was moderated by Professor Stefan McDaniel, the inaugural Rodes Fellow of the Program on Church, State & Society. Panelists included Kathleen A. Brady of Emory University School of Law, Professor Richard Garnett of Notre Dame Law School, and Steven Smith of the University of San Diego School of Law.

The final panel discussion centered on the theme of “Liberalism and Christianity in Practice” and was moderated by Professor Marah McLeod. The panelists included Paul Billingham of the University of Oxford, Melissa Moschella of the Catholic University of America, and Amy Sepinwall of the Wharton School at the University of Pennsylvania.

Jonathan Chaplin of the University of Cambridge and Michael Moreland of Villanova University Charles Widger School of Law will be analyzing the panelists’ articles and writing detailed responses to several of the ideas that the authors present in their pieces. Their responses, along with the panelists’ articles, will be published in Volume 98, Issue 4 of the Notre Dame Law Review in Spring 2023.

In preparation for the event, the Law Review worked closely with the Program on Church, State & Society as well as Professors Nathan Chapman and Kathleen Brady, both of whom presented scholarship at the symposium. Chapman and Brady proposed the symposium topic and provided an extensive list of authors for the Law Review to consider.

“When we were approached about the symposium, we were told that in recent years there have been increasing criticisms of liberalism more generally in Christian scholarly circles,” said Klaus. “So far, there hasn’t been a coordinated effort to contextualize or assess the intellectual movement. [Professors Chapman and Brady] explained that this could be an opportunity for Notre Dame to be at the forefront of this topic.”

The event was highly engaging and successful, drawing a crowd from various departments at Notre Dame in addition to many law school faculty, staff, and students.

Professor McDaniel was pleased by the amount of engagement from the audience and proud of the Law Review for inviting such qualified people to identify and speak on issues pertinent to liberalism and religion.

Reflecting on the relevance of the symposium topic, McDaniel said, “I think that there is a lot of uncertainty and division, and one of the lines of division is over the place of religion in liberal democracy. But, just as important is the compatibility of liberal democracy with Christianity.”

McDaniel’s research interests are labor and employment, and church-state questions. He is currently working on a paper on the ministerial exception, which works at the crossroads of those two subjects.

Following the symposium, Klaus noted that the highlight of her experience was working with everyone from the Law Review. “I could not have done this without Nicholas D’Andrea and Meghan Flanigen,” she said. D’Andrea serves as the editor-in-chief of the Law Review, while Flanigen is a senior symposium editor.

Last month, the Law Review held its first symposium of the year, centered on the theme of “Unconstitutional Conditions and Religious Liberty.” The symposium brought together religious liberty experts from across the country for engaging discussions about their articles on unconstitutional conditions, which will appear in a special issue of the Notre Dame Law Review Volume 98’s Reflection issue.

The Notre Dame Law Review will host its next symposium about the federal court on January 23, 2023.