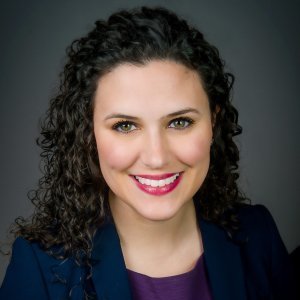 Cut Off, La., native Elizabeth Adams remembers the first time she toured the University of Notre Dame as a high school student. It was one of several schools on her list to visit, but it quickly became the only college she wanted to attend.

“I walked on campus and thought, ‘This is where I want to be.’ It just felt right,” she said. “I ended up only applying to Notre Dame.”

Even after four years on campus, she wasn’t quite ready to leave Notre Dame upon earning her bachelor’s degree in political science in 2008, so she applied to Notre Dame Law School.

Growing up surrounded by the oil industry, Adams had an interest in energy law. A first-year Property class strengthened her interest and emphasized the importance of stewardship of natural resources.

Professor John Nagle, who taught the class, was impressed by Adams’ work and enthusiasm, and he hired her to be a research assistant to help him work on a book – “Law’s Environment: How the Law Shapes the Places We Live.” That position turned into a part-time job through the rest of Adams’ law school career.

“She did a fabulous job,” Nagle said. “She was a terrific researcher – someone who really enjoyed the work and could get things done.”

Adams graduated from Notre Dame Law School in 2011 and returned to her home state to practice law at Taylor Porter, one of Louisiana’s oldest defense firms. She began working on cases for electric utilities and focused her practice on public utility law. In 2014, she earned an LL.M. in global energy, international arbitration, and environmental law from the University of Texas at Austin.

In November 2015, she joined Entergy, a Fortune 500 corporation headquartered in New Orleans with approximately $10.8 billion in annual revenues. Adams works as a regulatory attorney dedicated to Entergy Louisiana – the corporation’s largest operating company which supplies power to over a million customers in Louisiana.

At Entergy, similar to her experience at Notre Dame, Adams again felt completely sure she was in the right place at the right time. Also, in line with Notre Dame’s values, there is a community-building and stewardship aspect to her career at Entergy.

“People don’t think about electricity much until the lights go out or a huge storm threatens the grid, because we’re so good at what we do,” she said. “But there’s a tremendous sense of responsibility to provide reliable and affordable power to our customers. Electric utilities touch every aspect of our communities; we power homes, hospitals, schools, and industrials. Ultimately, we are the foundation for a strong economy.”

Adams said she felt at home at Entergy right away when Drew Marsh, ’94 B.S., executive vice president and chief financial officer, and Rod West, ’90 B.A., group president of utility operations, reached out to her as fellow Notre Dame alumni.

“Elizabeth came in and immediately made an impact on our regulatory efforts,” Marsh said. “Her high energy, great attitude, attention to details, and strong work ethic make her an outstanding addition to our team.”

Marsh added that Adams has also made an impact in the community by immersing herself in several professional and charitable organizations, including the Posse Foundation, which identifies public high school students who have extraordinary potential but may be overlooked by traditional college admissions processes. Posse places the students in supportive teams and partners with universities to award them full-tuition scholarships. The organization has sent more than 20 students from the New Orleans area to Notre Dame in the past two years.

“I found my niche,” Adams said. “I am passionate about power, and I’m challenged by the intersection of our business, policy, law, and politics. I look forward to coming to work every day. I’m grateful that I’m able to serve my community while working for a world-class company.”

Adams maintains strong ties with her alma mater and said the relationships she developed at Notre Dame are still important to her today – with fellow alumni and former professors providing advice, ideas, or even course correction, if necessary.

Professor Nagle continues to be a friend and mentor, serving as a sounding board as she navigates her career. She likewise has provided insightful ideas and editing on pieces he has written.

Coming back to campus to teach in the trial advocacy program or serve as a guest speaker in Professor Bruce Huber’s energy law class is also special for Adams.

“Other than my family and my faith,” she said, “I can’t think of anything that has had a bigger influence on my life than Notre Dame.”