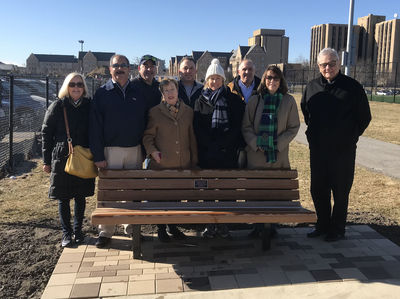 The Notre Dame Law Association board commemorated the end of Dean Nell Jessup Newton’s tenure by dedicating a bench in her brother’s name outside of the Stinson Rugby Field during the weekend of the NDLA board’s spring meeting, March 22-23.

NDLA President Jim Carr ’87 J.D. spoke at the annual NDLA board dinner, noting that Dean Newton had a long route to South Bend, but that Notre Dame was in her family. 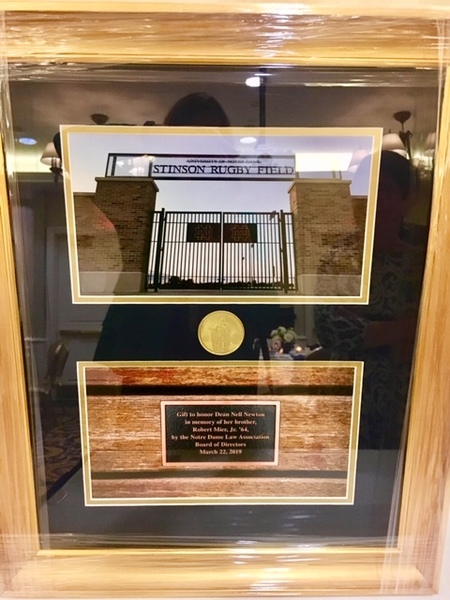 The framed photographs of the dedicated bench were given to Dean Nell Jessup Newton at the dinner. Photos provided.

“Growing up in the Midwest and with a brother that graduated from Notre Dame in 1964, you would think that Nell was destined to someday find her way to South Bend. But when you attend college and law school in California, and your first job is in Washington, D.C., the prospect of getting to Notre Dame Law School seemed very slim,” Carr said. “But Notre Dame had a way of staying in Nell’s heart. So, when Father John Jenkins called Nell in 2009, and asked her to become the dean of Notre Dame Law School, she said yes, and we are very glad that she did.”

In thinking about how to commemorate her service, Carr and other NDLA members decided to a dedicate a bench on campus. Placing it near the Stinson Rugby Field honors her brother Robert Mier’s memory, as he helped found the Notre Dame Rugby team while here as a student. The group presented her with a framed picture of the bench and its view of the rugby field.

In addition to the bench and framed photographs, incoming NDLA President Nancy Gargula ’81 J.D. designed a platter that all of the board members signed.

The bench was dedicated and blessed by the Law School’s chaplain, Rev. William E. Beauchamp, C.S.C., in a small ceremony on March 23. Father Beauchamp is a member of Notre Dame Law School’s Class of 1975. 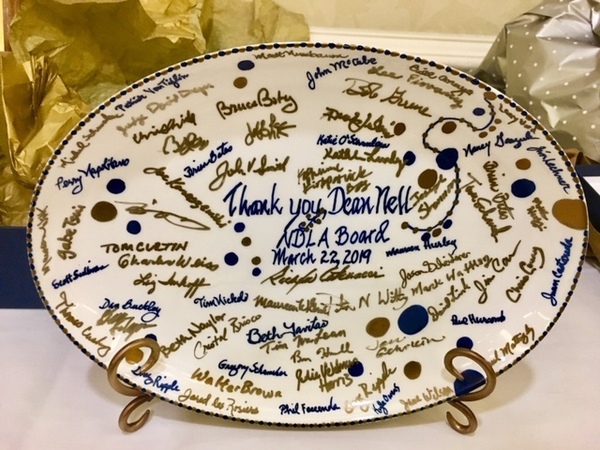 A platter signed by the NDLA board was given to Dean Nell Jessup Newton at their annual dinner. Photo provided.