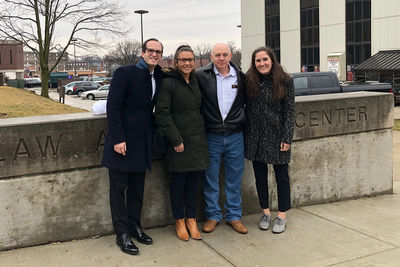 On March 15, Donald Whalen walked out of the county jail in Bloomington, Illinois, and embraced his family members. After more than 27 years in prison, he was free to enjoy a simple pleasure — dinner at his mother’s house.

Whalen always insisted that he was innocent of murdering his father in 1991, and the Exoneration Project is giving the 52-year-old an opportunity to prove his innocence.

A judge vacated Whalen’s murder conviction in February. Exoneration Project attorneys Elliot Slosar and Tara Thompson successfully argued that DNA and fingerprint evidence discovered since Whalen’s first trial could have helped clear him of the charges.

Whalen was released on bond on March 15 and is awaiting a possible second trial.

“Being a member of the Notre Dame Exoneration Project for two years has been an invaluable experience,” Slaimen said. “The opportunity to work with dedicated and inspirational attorneys like Elliot Slosar and Professor Gurulé has helped me develop my advocacy skills, understand what it means to be a different kind of lawyer, and ultimately correct miscarriages of justice. Seeing Donald Whalen enjoy the freedom he so rightly deserves after nearly 28 years affirmed my passion to advocate for the wrongfully convicted.”

Campell said, “After spending two years investigating cases and drafting petitions for the Notre Dame Exoneration Project, it was an invaluable experience to see how evidence and theories developed early in the case play out at the evidentiary hearing. I will never forget seeing Donnie Whalen, who fought for his innocence for 28 years, finally have a fair day in court. Thanks to the commitment of Elliot and Professor Gurulé, many more clients and students will have the same opportunity.”

Slosar and Gurulé said that Campbell and Slaimen are an inspiration and embody what experienced innocence attorneys strive to be.

“Molly and Alyssa dedicated an incredible amount of time to giving Donnie the legal representation that he deserved decades before,” Slosar said. “Even the polar vortex, which occurred during our evidentiary hearing, could not derail their determination to reverse Donnie’s wrongful conviction. Through their tireless efforts, an innocent man was released into the loving arms of his family.”

Professor Gurulé added, “Notre Dame Law School is committed to educating a different kind of lawyer — a lawyer devoted to justice, equality under law, and improving society for the socially marginalized members of society. Molly and Alyssa embody these lofty values as demonstrated in their fight to correct the miscarriage of justice and secure the freedom of a man wrongfully convicted of murder.”