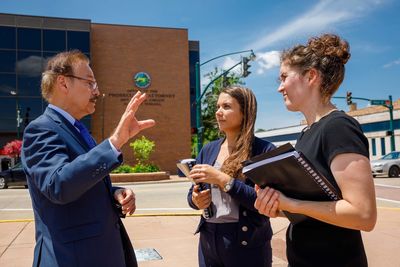 Last spring, Keith Cooper inspired Notre Dame Law students with his story of determination to clear his name and reclaim his life after being wrongfully convicted of armed robbery in Elkhart, Indiana.

His attorney, Elliot Slosar of the Exoneration Project at the University of Chicago Law School, pointed out to the audience in Eck Hall of Law that he was still a law student when he started working on Cooper’s case.

“There are many people out there who would love your help – even before you’re admitted (to the bar),” he said.

The students took Slosar’s words to heart and started the Notre Dame Exoneration Project, a student-run organization that worked on four cases during this past academic year.

One of those cases is making news. Again, it involves Elkhart – a city of roughly 50,000 people located a half-hour’s drive from Notre Dame’s campus.

Slosar filed a petition June 13 in Elkhart County Circuit Court to vacate judgment in the murder conviction of Andrew Royer, a man who says police exploited his intellectual disability to coerce him into making a false confession in 2003. The Notre Dame Exoneration Project is listed on the petition, which includes several statements from police officers who support Royer’s claims of innocence. In the petition, Slosar acknowledges three Notre Dame Law students – Molly Campbell, Paula Cardona, and Alyssa Slaimen – for their important contributions to the case.

Royer had no prior criminal record before he confessed in 2003 to strangling a 94-year-old woman who lived in his Elkhart apartment building. He said afterward that he simply told police what they wanted to hear. Royer’s mother told the Indianapolis Star in an interview in 2017 that her son has the aptitude of a 12-year-old and made the confession under duress. Additionally, two witnesses have recanted their trial testimony and said their statements were the result of police coercion. 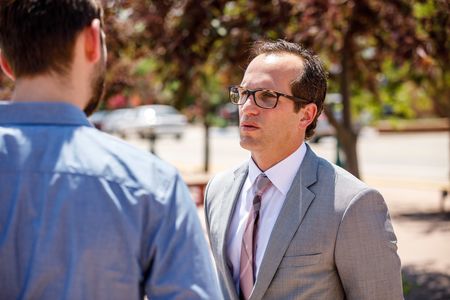 Elliot Slosar, staff attorney for the Exoneration Project at the University of Chicago Law School, speaks to media on June 13 at a press conference about the Andrew Royer case in Elkhart, Indiana. // Peter Ringenberg, University of Notre Dame

Lana Canen, Royer’s co-defendant, has already been exonerated. She was convicted in 2005 based on fingerprint evidence found at the crime scene. A judge overturned Canen’s conviction in 2012 after new analysis proved the fingerprint was not hers.

Royer has appealed his conviction three times already without success, and the Elkhart County Prosecutor’s Office has maintained that the right person was convicted of the crime. However, the Exoneration Project is hopeful the new evidence in the petition filed today will earn Royer’s freedom.

Campbell, a rising third-year student at the Law School, said her participation in the Notre Dame Exoneration Project and the Royer case has been a formative experience.

“It has been an opportunity to learn from top-notch attorneys, professors, investigators, and fellow students who are exceptionally generous with their time and expertise,” Campbell said. “More importantly, it has given our client hope and a dedicated team providing him with the legal assistance he needs.”

Slaimen, also a rising third-year student, said working with the Notre Dame Exoneration Project has been the most impactful and influential experience she has had at the Law School.

“From the first meeting with the Exoneration Project, I was shocked to hear about Andy’s case, and it motivated me to get more involved,” Slaimen said.

“Throughout the year, it has been truly inspiring to work with other law students, professors, investigators, and attorneys who dedicate their time to fight for justice in instances when the criminal justice system has failed,” she said. “Mr. Royer’s new petition to vacate judgment gives him hope that he will be exonerated after wrongfully serving 15 years in prison.”

“However, the ultimate goal is to correct a gross miscarriage of justice,” Gurulé said. “Moving forward, the students are firmly committed to securing the freedom of a person who was wrongfully convicted of murder and has unjustly spent 15 years in prison.”

Gurulé said Notre Dame Law students flooded into the Exoneration Project’s work during this past academic year. Students have been doing all of the work as volunteers, not for academic credit, but that will change in the fall when the Law School launches its Wrongful Conviction Externship supervised by Gurulé and Slosar.