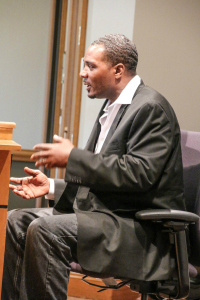 The series of events that swept Keith Cooper into the criminal-justice system – and sent him to prison for a crime he didn’t commit – is so nightmarish that it sounds like something out of a screenplay or a novel.

In 1997, Cooper went from having two jobs and no criminal record to being a convicted felon – sentenced to serve 40 years in prison for an armed robbery at an apartment complex in Elkhart, Ind.

Cooper and his attorney, Elliot Slosar of the Chicago-based civil-rights law firm Loevy & Loevy, spoke last week at Notre Dame Law School. Cooper talked about the combination of bad luck and official misconduct that led to his arrest and conviction, and Slosar described the decades-long process that finally led to Cooper clearing his name.

“I was at a breaking point. I was ready to give up,” Cooper said of his mindset before he met Slosar. 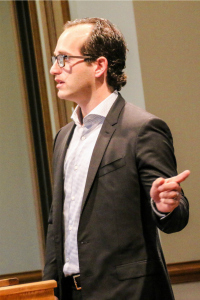 Chicago-based attorney Elliot Slosar talks about his work to help Keith Cooper clear his name after a wrongful felony conviction.

Cooper was completely innocent of the robbery, but he happened to be a tall, skinny black man – like the robbery suspect. The witnesses who testified against him would later recant their stories, and DNA from a hat left at the robbery scene would point to a different man as the perpetrator.

That new information in Cooper’s case led to him being released from prison in 2006.

“That was one of the happiest moments of my life – to be told, ‘Keith, you’re back among the living,’” he said.

But – while Cooper was relieved to be free after nine years in prison – he still carried the burden of the felony conviction, which remained on his record and hurt his opportunities for employment.

In 2014, the Indiana Parole Board recommended that then-Gov. Mike Pence pardon Cooper. Even the attorney who prosecuted Cooper wrote a letter urging Pence to grant the pardon.

It wasn’t until February, when Pence’s successor, Gov. Eric Holcomb, was in office that Cooper was pardoned of the robbery conviction.

Slosar was an investigator at Loevy & Loevy and still a student at DePaul University College of Law while working on Cooper’s case and petitioning for his pardon. Slosar’s efforts were part of the Exoneration Project at the University of Chicago Law School.

“There are many people out there who would love your help – even before you’re admitted (to the bar),” Slosar said.

“I would urge you, no matter what type of law you practice, to engage in pro-bono work,” he said. “There are a number of wrongfully convicted people in America and elsewhere.” 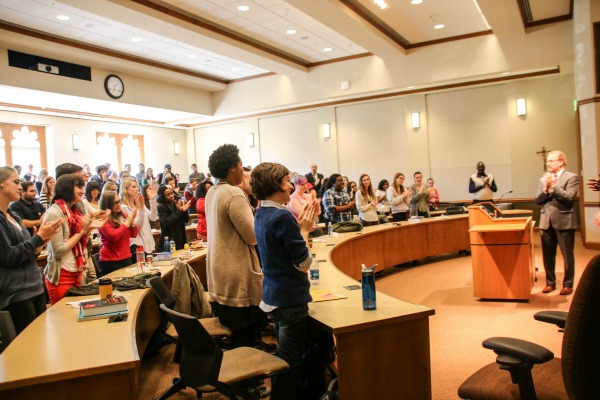 Notre Dame Law School students give Keith Cooper and Elliot Slosar a standing ovation on April 12 in the Eck Hall of Law.

Gurulé encouraged students to think about how such a case could happen – despite all of the protections the U.S. Constitution provides for defendants – and how it can be prevented from happening again.