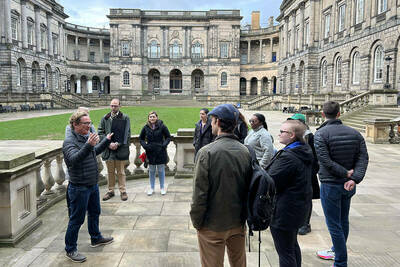 In addition to service trips — notably, the twice-yearly trip to the Appalachian region, where students and faculty assist residents with their legal needs — several students had the opportunity to experience the context of the law outside of the classroom, both in the United States and internationally.

Read about their experiences below.

First-year law student Madeline Raster, along with Sam Bruchhaus and Ashwin Bala from the Mendoza College of Business M.S. in Business Analytics program, participated in the Tulane Pro Basketball Negotiation Competition. The competition was held at Tulane University School of Law and centered around negotiating mock contracts for current NBA players on the agent and team sides. The Notre Dame team placed second out of 46 schools.

Every team participated in four rounds, with only four teams making it to the championship round. Teams were judged on their knowledge of the Collective Bargaining Agreement, quality of the deal, and advocacy skills. The judges included agents, NBA league and team representatives, and NBA media figures.

“I am grateful for the opportunity to have participated in this excellent competition,” Raster said. “It was a great experience and I want to thank my talented teammates, Sam and Ashwin, for their hard work and friendship throughout the hours of preparation. I also want to thank the Mendoza College of Business for its support of our trip to Tulane.”

Third-year student Ijeoma Oti, along with Angelina Soriano Nuncio from the Keough School of Global Affairs, accompanied Professor Diane Desierto to the Office of the United Nations High Commissioner for Human Rights in Geneva, Switzerland.

Desierto is the chair-rapporteur of the United Nations’ Expert Group on the Right to Development, which is drafting a new treaty recognizing development as a human right. The students supported the group’s work as final revisions, proposed by member states and civil society, were discussed and made to the Draft Convention on the Right to Development. The draft will move forward to the 23rd Intergovernmental Session in May.

Oti was responsible for ensuring that all of the revisions were accurately represented in the new working draft. She also wrote memos on the legal issues of specific components of the treaty that will be included in the commentary of the draft.

The Draft Convention is slated to be the 10th major UN human rights convention and the first such human rights treaty since the 2014 passage of the Convention on the Rights of Persons with Disabilities.

Oti has always had a personal interest in development and human rights work. When she noticed Desierto was heavily involved in this area, Oti approached her for advice. That led to Oti learning more about Desierto’s research, becoming her research assistant, and then having the opportunity to accompany her to work on the Draft Convention.

“I showed up at 9:00 a.m. to Professor Desierto’s office hours to discuss how to ensure that I don’t lose sight of my desire to contribute to the furtherance and protection of human rights and development as I progress in my career, and she’s made sure of it,” said Oti. “This has already been a monumental opportunity and I look forward to the work we’ll continue to do together in promoting the importance and universality of human dignity.”

Desierto said of Oti, “I am grateful that the Law School educates a different kind of lawyer in Ijeoma Oti. The United Nations' Expert Group benefited tremendously from Ijeoma's careful eye and ongoing training in international law, also in her capacity as editor-in-chief of the Journal of International and Comparative Law.”

Bringing Energy Law to Life in the United Kingdom

Ten students from Professor Bruce Huber’s Energy Law course visited the United Kingdom over spring break to learn more about the United Kingdom’s different energy sources and policies. Specifically, the focus was on how the United Kingdom’s withdrawal from the European Union — “Brexit” — is affecting energy in the U.K. and how Wales and Scotland now approach their energy and natural resource policies.

The trip was an additional one-credit course, after which the students will write a paper about their experience.

Some of the trip highlights included:

Students loved the opportunity to take in the cultural aspects of several areas in the U.K. and see topics they discussed in class brought to life by presentations and experiential visits.

“I loved this trip. I was never able to study abroad during undergrad and as an assistant rector I can’t do any other study abroad. This was an amazing opportunity to experience a study abroad situation and learn a lot,” said second-year law student Erica Patterson. “Every activity we did was fun, and I learned so much about the places that we went to. I loved seeing things that we discussed in class as well. For example, wind turbines, fish ladders, and an oil refinery. Professor Huber also brought current energy issues into the trip, which was very interesting.”

Another second-year student, Kayleigh Verboncoeur, said, “This trip was incredibly educational and all components (social, academic, experiential) were amazingly integrated. Professor Huber effectively bridged the divide between theory and application through our readings, discussions, and experiential excursions while keeping all students engaged. He's the ideal professor to do any kind of study abroad program with, as he very obviously has a huge amount of passion for his study area and appreciates the value of cultural experiences. I felt incredibly lucky to have one-on-one conversations with him about many topics throughout the week.”

Verboncoeur continued, “I particularly enjoyed learning about hydropower in Scotland in conjunction with conversations on the contemporary political climate — many of us subsequently discussed those topics with locals during our social time and further developed that understanding. The speakers and individuals we were able to meet throughout the week were also highlights of the trip. Professor Harrison in particular facilitated an amazingly comprehensive overview of Scotland’s natural resource and environmental law situation, a lecture that effectively rounded out the major themes of our course. I felt that I returned to the United States with a new appreciation of the domestic and global implications of the U.K.'s energy policy and am excited to integrate that knowledge into the broader Energy Law course."