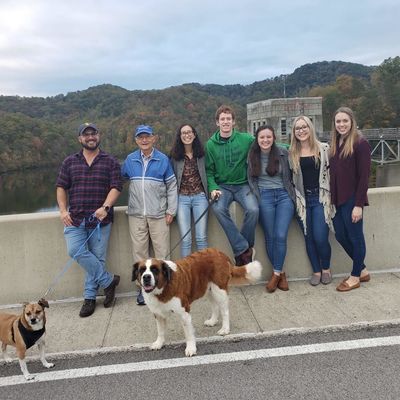 Steeped in the last of the vibrant fall colors, the foothills of the Appalachian Mountains surround both sides of the road. Billboards scattered across the mountainside advertise attorneys for black lung victims and Social Security benefits and worker compensation.

It is here in Prestonsburg, Kentucky, that Notre Dame Law student Justin North stands in front of a running car on the side of the road outside the Floyd County Courthouse. He is urgently talking to Joe, a victim of a massive Social Security fraud case, whose attorney had been trying to reach him. But with no home, no car, and no phone, that has been difficult. Joe finally found a ride with a neighbor, but the driver is anxious to leave. So, Justin uses every second that he has with Joe to relay all of the important information he needs.

This is just one of the encounters six Law School students experienced on a trip to eastern Kentucky during fall break.

For the past 10 years, groups of students from Notre Dame Law School have spent their fall and spring breaks learning about the rich culture and extreme poverty of the Appalachian region while assisting residents with their legal needs. As part of the Law School’s Appalachia Externship, students work alongside staff attorneys at AppalReD Legal Aid, the umbrella legal services organization serving eastern Kentucky, whose executive director is Notre Dame alumnus Robert Johns ‘91.  Students also work with local attorney Ned Pillersdorf, managing partner at Pillersdorf, DeRossett & Lane, who represents clients in a variety of civil rights and environmental issues related to rural poverty and coal mining operations.

In one of the largest cases of Social Security fraud in history, hundreds of clients of disbarred attorney Eric Conn had been cut off from their disability benefits for years. Joe, mentioned above, was one of those clients. For most, Social Security was their only source of income. After a favorable ruling in 2018 by the U.S. Court of Appeals for the Sixth Circuit in Hicks v. Commissioner of Social Security, benefits were slowly being reinstated. Pillersdorf, who represents several of Conn’s former clients, was holding a meeting to update clients about their cases.

Students were able to observe how Pillersdorf coordinates massive class action lawsuits and the traumatic effects the loss of benefits not only has on individuals, but how it extends to the entire community.

“When a significant portion of the community loses its livelihood, that trickles down. When people can’t buy groceries, they have IOUs at the local corner stores, and then those small businesses start losing their income,” said North.

Pillersdorf gave Fulk and Yuan the opportunity to write a motion for one of his clients who had his benefits stopped. The client lived in West Virginia and had to bring his suit in the federal district court there. He lost his case in the district court, and did not appeal it to the Fourth Circuit Court of Appeals. After the Hicks decision in the Sixth Circuit, Pillersdorf wanted to ask for relief under Federal Rule of Civil Procedure 60(b)(6) to reopen the client’s case due to the changed circumstances in the Sixth Circuit.

“Other courts outside of the Sixth Circuit have been following the Hicks decision, so Ned thought his client would have a good chance of having his case reopened,” Fulk said. “Theresa worked a lot on the research and case law behind Rule 60(b)(6) while I worked on writing up the background information on the Hicks decision and court decisions in other circuits that have followed Hicks and ruled the Social Security procedures unconstitutional.”

And in another notable legal proceeding, a settlement was approved on Oct. 24 between Blackjewel LLC, a coal company that declared bankruptcy earlier this year, and hundreds of miners left unpaid for weeks of work. The case gained national attention when the miners blocked a coal train from leaving the shuttered mine until they were paid. Pillersdorf also represents many of the Kentucky miners who are expected to receive nearly $2 million in back pay.

The students assisted Pillersdorf and other attorneys at a meeting with the miners and their families. Students helped miners fill out their claim forms. Even though the miners would be receiving their back wages, they still needed to understand the importance of filing their claims because of additional litigation ongoing against the company. North gave a Facebook Live presentation to miners who were unable to attend the meeting.

The students saw firsthand the unconventional methods often used in rural areas, such as using Facebook Live to reach clients who are unable to come in person because of lack of transportation or illness.

Students prepare for the Appalachia Externship ahead of time through readings, films, and classroom sessions conducted by Robert Jones, clinical professor of law and associate dean for experiential programs.

“The externship provides a deep educational experience on many levels,” said Jones. “Students learn about one of America’s richest cultures, in one of its most beautiful regions, while serving individual clients who are facing the consequences of widespread poverty and injustice. The students grow as people and as lawyers.”

Students stay in a cabin in nearby Jenny Wiley State Park. Their transportation and lodging are funded by the Faegre Baker Daniels Foundation, and they receive extraordinary hospitality from the AppalReD staff and the local bench and bar.

This year, students met John Rosenberg, founder of AppalRed. Now retired, Rosenberg, a former trial attorney in the U.S. Department of Justice’s Civil Rights Division, is still active in the legal issues in Appalachia and has been honored by many civic and humanitarian groups for his devotion and work in Appalachia.

At a weekly domestic violence session for family court, students observed the proceedings. They met with lawyers and judges who explained their perspectives of the cases that come before them and the different ways they approach those cases. Disputed custody battles, clients re-entering turbulent relationships, and clients not showing up for court are some of the challenges legal aid professionals face in family court.

Students worked one-on-one with AppalReD clients to prepare pleadings in simple domestic cases. The students learned that each client’s needs are different. Some needed help reading the forms completely, while others just needed reassurance. They also spoke to a group of senior citizens on the importance of wills and power of attorney.

Fulk was impressed with the collaboration in the community. “Everyone we met — lawyers and judges — were so passionate about their individual cases. Ned is selfless. He takes on projects and goes after whatever he sees a need for in the community,” she said.

And the need is great. Floyd County is one of the poorest counties in the state and in the country with 32 percent living below the poverty level.

“This is a beautiful area with honest, hardworking people. We met so many talented lawyers that could be working anywhere, but they stay in Appalachia and devote their lives to this community. There have been tremendous successes so far, but there is plenty of important work that remains,” said Brolley.

North reflected on his meeting with Joe, the client he met with on the side of the road outside the Floyd County Courthouse. “I read a lot about the region and thought I had somewhat of a grasp on the situation in Appalachia. I got there and it was mind-boggling,” said North. “A simple thing like trying to figure out how to reach a man just to get him to talk to his attorney. It goes beyond what you can imagine.”

The Appalachia Externship is just one of the many opportunities Notre Dame Law students have to draw on their classroom learning and get hands-on practice of legal issues.

For more information about the Law School’s externships, visit law.nd.edu/externships.