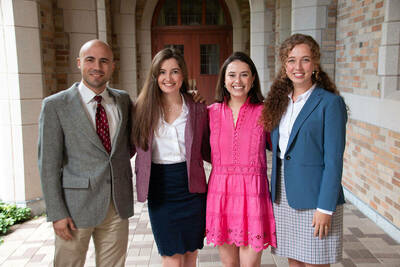 Murphy was an exemplary Catholic legal scholar and law teacher. He joined the faculty in 1957, served as acting dean during the 1970-71 academic year, and directed the Notre Dame Summer Program in Japan in 1974. He was appointed the John N. Matthews Professor of Law in 1979, becoming the first chaired law professor at Notre Dame.

Former Dean David T. Link said in an article about Murphy, “Ed was a professor for all seasons: teacher, scholar, mentor, role model and committed servant to the University and the Church.”

Murphy was known as a leading academic authority in the area of contracts. He was the co-author of the most widely used contract casebook in the country at the time. He also taught jurisprudence during his time at the Law School.

In his 1994 essay, “The Sign of the Cross and Jurisprudence,” published in the Notre Dame Law Review, Murphy wrote: “Every class I have taught in the Notre Dame Law School has begun with the same action and the same words. I have made the ancient Sign of the Cross, while saying: ‘In the name of the Father, and of the Son, and of the Holy Spirit.’”

Richard Garnett, the Paul J. Schierl/Fort Howard Corporation Professor of Law and director of Notre Dame Law School’s Program on Church, State & Society, said that he also starts all of his classes with the Sign of the Cross because of Murphy’s influence. Murphy retired in 1994 after 37 years as a faculty member. At the time of his death in 1995 he had taught more Notre Dame Law School students than any other professor in the history of the University.

“It is fitting that a fellowship aimed at supporting students’ engagement with questions about church-state relations and religious freedom is named for Professor Murphy. He was, for his students and colleagues, a wonderful example and role model. We at the Law School are grateful for the generous support of the benefactors who made this fellowship possible,” said Garnett.

The Murphy Fellowship will be awarded annually to first-year law students and selected through a written application process.

Joseph Andres received his undergraduate degree from Thomas Aquinas College and completed his master’s degree in theology at Ave Maria University. He worked in sales before applying to law school.

Andres said he came to ND Law because it is a Catholic law school with top notch job prospects.

“My primary purpose in going to law school is to put myself in a position to build up Catholic community at the natural level, in other words, building up the common good of society on an explicitly Catholic foundation,” said Andres. “Law is an essential piece of that goal, and since the Murphy Fellowship is about exactly those things — Church, Law, and Society — I’m excited that there’s already an entire fellowship devoted to the goals I came here with.”

Olivia Lyons is from Washington, D.C., and received her undergraduate degree from the University of Notre Dame. Before coming to law school she worked as a market research analyst.

“I highly value Notre Dame’s commitment to its Catholic identity and free speech in the academic setting. Also, Notre Dame has first-class faculty and a strong community,” Lyons said when explaining why she chose ND Law.

“I am excited to be a Murphy Fellow because it gives me the opportunity to explore issues I’m passionate about, like religious liberty, under the guidance of phenomenal professors,” said Lyons.

Hadiah Mabry is from Somerset, Kentucky, and received her undergraduate degree from Hillsdale College. After graduation she was a fellow at the John Jay Institute in Pennsylvania and then worked at Hillsdale College.

She came to ND Law because she knew it would provide her with a robust ethical framework for the practice of law.

“Notre Dame was a natural choice, especially when considering its excellent faculty. I was also heavily swayed by Notre Dame’s central place in the Catholic intellectual tradition and the opportunity to work closely with the Program on Church, State & Society,” said Mabry. “I am thoroughly intrigued by the interplay between law, culture, and religion, and I wanted my legal education to complement my undergraduate studies in First Amendment issues.”

She said the Murphy Fellowship has already provided her with opportunities to engage with people, texts, and events directly related to her area of interest.

“I am most excited to have a firsthand view of Notre Dame’s excellent scholarship, both on campus and through visiting speakers,” said Mabry.

Tess Skehan graduated from Hillsdale College and worked as a legislative aide to U.S. Senator Pat Toomey of Pennsylvania before coming to law school.

She chose Notre Dame because she wanted to study the law at a rigorous institution that challenged her to grow not just academically and professionally, but spiritually as well.

“I look forward to learning how to apply the knowledge I learn in the classroom to help faith flourish and protect the closely held rights of all through my work with the Program on Church, State & Society,” said Skehan.

Learn more about the Program on Church, State & Society at churchstate.nd.edu.