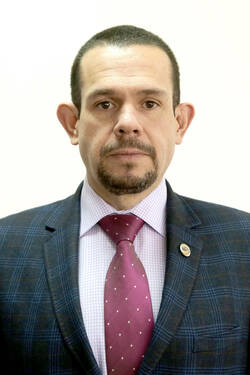 Juan Pablo Albán Alencastro holds a law degree from Pontificia Universidad Católica del Ecuador and an LL.M. in international human rights law from Notre Dame Law School, where he is currently a J.S.D. candidate in international human rights law. For over a decade he has served as a tenured professor of law at Universidad San Francisco de Quito (Ecuador) Law School and since 2019 as the director of the Public Interest Clinical System. In such capacity he has represented victims both at the domestic and international levels in high profile constitutional, criminal, and human rights litigations. Previously, for nine years he was part of the professional staff of the Inter American Commission on Human Rights. He also directed the Human Rights Clinic and was an associate professor of law at Pontificia Universidad Católica del Ecuador. Albán also teaches courses on human rights in several graduate programs throughout the Americas and Europe. In December 2017, he was appointed as foreign expert of the Special Jurisdiction for Peace in Colombia. In June 2018 he was appointed council member of Ecuador’s highest organ within the judicial branch, the Council of the Judiciary, and in June 2021 he was elected for a four-year term as a member of the UN Committee on Enforced Disappearances. He is a member of the American Society of International Law, the Inter-American Institute on Criminal Policy based in Mexico, and has been called as an advisor or expert witness by Ecuadorian and international adjudication bodies in the fields of criminal, constitutional, international, and human rights law. 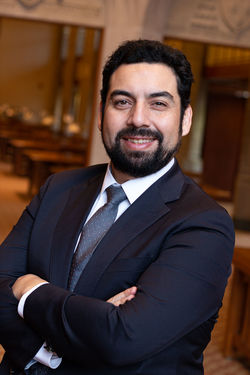 Jorge Barrera Rojas is a J.S.D Candidate at Notre Dame Law School. Before joining the Law School, Barrera Rojas received his LL.B. from the University of Chile in 2011, and he holds an LL.M. degree in Public Interest Law and Policy from the University of California, Los Angeles in 2017, where he also received the Dean’s tuition fellowship award. Barrera Rojas has worked as a legal advisor for numerous charitable and political organizations on issues ranging from education to constitutional reform, as well as having represented Chilean senators and deputies in several parliamentary writs before the Chilean Constitutional Court. Barrera Rojas is currently a Professor of Constitutional and Administrative Law in the Universidad San Sebastian, School of Law and Government, Chile, and practices law as a Senior Associate in the law firm Bofill Mir & Alvarez Jana. The President of Chile appointed Barrera Rojas in 2018 as a member of the “Council of Evaluation for the Public Education System,” which has the power to improve and amend Public Education Reform in K-12 schools. Barrera Rojas was recognized in 2017 between the 100 Young Chilean Leaders in his capacity as a Constitutional Law attorney. Barrera Rojas' research will focus on adequate education as a fundamental right in a comparative law perspective. He will emphasize how to establish a minimum standard of compliance and effective remedies for the right to education in the Chilean domestic law. 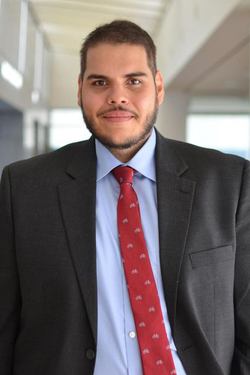 Bichet is a lecturer in International Law, Human Rights, and Legal Theory at the Faculty of Law of the University of Panama (on leave) and has been a research and teaching assistant at Notre Dame Law School (USA). To pursue his studies at Notre Dame, he was awarded a  Fulbright-Laspau Scholarship and has previously been awarded Erasmus Mundus (EU) and ‘Fundación Carolina’ (Spain) scholarships. His current research deals with the effect of restorative justice in international criminal procedure and he is also generally interested in legal theory, legal history, and critical studies. Currently, he serves as Associate Editor of the Max Planck Encyclopedia of International Procedural Law. 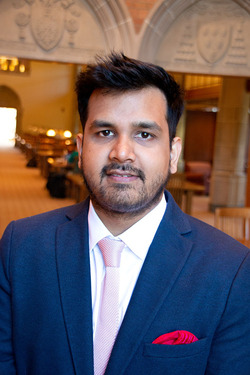 Prior to venturing into the field of international law, Anivesh Bharadwaj received his Bachelor of Commerce (2013) and Bachelor of Law (2017) degrees from the University of Delhi. Subsequently, after qualifying as an advocate in India, he worked in the field of constitutional and human rights litigation with the Chambers of Ms. Karuna Nundy and with J. Sagar Associates as an attorney. Eventually, he focused his independent legal practice on the issues of victims from marginalized communities of communal violence, gender-based violence (“GBV”), human rights, and criminal justice. To broaden his scope and maximize impact, Anivesh pursued his LLM (with cum laude) in International Criminal Law (“ICL”) (2020-2021), which was a Joint Program between Columbia Law School and University of Amsterdam. During this program he worked as a Research Assistant with Columbia Law School on a research project pertaining to analysis of the right to equality in South Asian countries, and assisted in projects pertaining to fair trial rights in criminal trials. After the LLM, Anivesh worked as a Visiting Professional at the Trial Chambers of the International Criminal Court, and as a Visiting Scholar at Columbia Law School. He also worked with a criminal appeals firm in California, assisting members of marginalized communities on issues of violation of the right to fair trial. Anivesh’s current research, as a JSD candidate in International Human Rights at NDLS, seeks to explore whether ICL in its current form addressed the issues of GBV victims in the Global Soth and analyses the arguments to acknowledge and include gendered identities of the victims of genocide as a means to address GBV in the Global South. The research argues that the limited recognition of gender in ICL, especially for the crime of genocide, ignores the intersectionality of the gendered identities of victims, thereby limiting the analysis of gender-based persecution to sexual assault."

Perla is a Lebanese, first generation attorney that graduated from La Sagesse University in Beirut with a Bachelor of laws, Magna Cum Laude, Valedictorian. She was awarded the Fulbright Scholarship by the U.S. Department of State and earned her Master of Laws, Summa Cum laude, Valedictorian from Loyola University in New Orleans. She also attended Drexel University as part of her Fulbright journey. Perla was sworn into the practice of law before the Beirut Court of Cassation as an attorney and part of the Beirut Bar Association in July 2022. Currently, Perla is running after her childhood dream of being hooded as a doctor by pursuing Notre Dame Law School's Doctorate of Juridical Sciences program. At Notre Dame, she's a Doctorate fellow at the Kellogg Institute for International Studies, and a student affiliate at the Klau center for civil and human rights. Perla has published over 9 articles across journals in the fields of privacy, technology, financial markets, and human rights. In the past years, Perla was sitting on the Executive Board of Proud Lebanon; an NGO that fights for the rights of minority communities. As part of her volunteering experience, she wrote the section related to the rights of LGBTIQ+ individuals in Lebanon's third round of the Universal Periodic Review (UPR) to the United Nations. She also ran a nation wide campaign aiming to decriminalize same-sex relationships in the country, therefore working with various political parties months before the parliamentary elections.

Kyung Mo Kang received an LL.M. in International Human Rights Law from Notre Dame Law School in May 2021. Prior to studying at Notre Dame, Mr. Kang earned B.A. in Korean law from Myongji University in Seoul and J.D. equivalent from Handong International Law School in Pohang, South Korea. He is admitted to practice in District of Columbia, and worked for corporations in Seoul as a corporate attorney. At the same time, Mr. Kang is a research fellow at Transitional Justice Working Group that is a Seoul-based organization for North Korean human rights. As a research fellow, he researched transitional justice mechanism, Extraordinary Chambers in the Courts of Cambodia (ECCC), and a crime of enforced disappearance (abduction) and published two books titled “A Study on Extraordinary Chambers in the Courts of Cambodia – Transitional Justice in Cambodia and the Unification of Korea”) and “A study on International Tribunal to prosecute those who are accountable for Civilian Abduction during the Korean War”.  His research interest covers human rights, international law, International criminal law, constitutional law and transitional justice. Geographically, he focuses on human rights crisis in North Korea and China. His dissertation topic is the criminal accountability for North Korean human rights violations, especially appropriate model of criminal tribunal for North Korean human rights crimes. 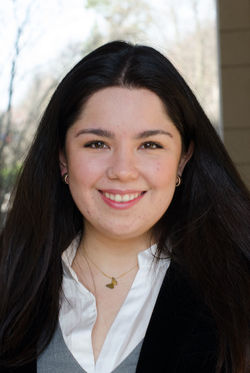 María Paz Madrid received her law degree from the Pontifical Catholic University of Chile in 2016, graduating with highest distinction. Her dissertation, Origins of the Concept of Academic Freedom in the American Academy (1890-1915), was awarded the highest mark. During her studies, she served as a research assistant to various academic projects, while also acting as a teaching assistant at the Philosophy of Law Department. She has presented, and later published, multiple papers on legal theory in different international seminars. Ms. Madrid has worked as the Coordinator of the PUC Law, Science, and Technology Program and as the Coordinator of the International Seminar on Natural Law Board. She has served as an Adjunct Law School Instructor of the Philosophy of Law Department at her Alma Mater from 2016 to 2018, and at Universidad Autónoma de Chile during 2020. 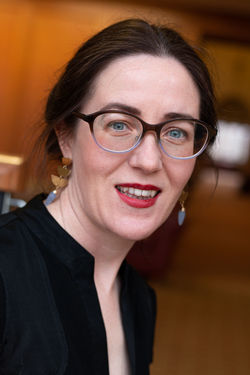 Clare O’Hare is a JSD Candidate at Notre Dame Law School. Before joining the Law School, Ms. O’Hare received an M.A. in Political Science from the University of Notre Dame and prior to this she obtained an LL.B. in Laws & French Law from Trinity College Dublin, an LL.M. from the University of Cambridge, and a Master of Arts in Law and Diplomacy from the Fletcher School at Tufts University. Ms. O’Hare is admitted to practice in England & Wales (2007) and Ireland (2014) and spent the majority of her career in practice with Freshfields Bruckhaus Deringer in London and Dubai working on complex cross-border financial transactions and insolvency matters. While in Dubai she established and co-chaired the firm’s regional Pro Bono and CSR Committee. Ms. O’Hare has spoken at numerous conferences in the Middle East and in the U.S. and has been invited to speak at the OECD’s 2020 Global Anti-Corruption & Integrity Forum in Paris. Ms. O’Hare’s doctoral dissertation, which is being conducted under the supervision of Professor Roger Alford, focuses on the growth of commercial courts as part of the market for dispute resolution services across the globe. She is also interested in the effect that this phenomenon has on the legal profession and access to justice. 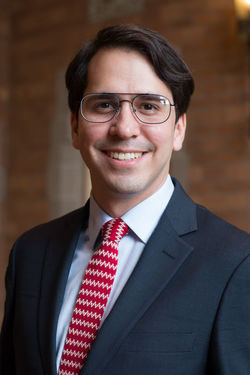 Bernardo Pulido Marquez holds a law degree from Universidad Católica Andrés Bello (UCAB) at Caracas, Venezuela (2010), where he also completed studies on Venezuelan Constitutional Law. Pulido Marquez also holds a Master in the Science of Law (JSM) from Stanford Law School where he was part of the Stanford Program in International Legal Studies (SPILS) (2012). For five years he was a part-time professor at Universidad Católica Andrés Bello teaching Human Rights, General Topics of Constitutional Law and Venezuela Constitutional Law. Before joining the J.S.D. program at Notre Dame Law School, he worked as a human rights advocate and activist in Venezuela, defending political prisoners, including some of the most relevant Venezuelan opposition leaders and victims of human rights violations, aiding them in legal actions and international claims. His research will focus on inadmissible restrictions on political rights. 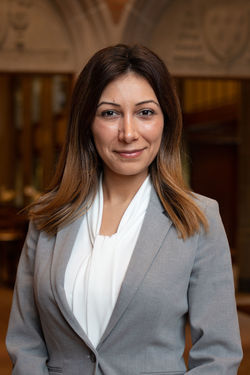 Khawla Wakkaf earned her LL.B. from the University of Tishreen School of Law, Syria (2010) and her LL.M. from the Syracuse University College of Law where she received the Civil Society Leadership Award from Open Society Foundations (2017). Before joining the J.S.D. program at Notre Dame Law School, Wakkaf worked as a legal fellow at Women Enabled International where she served as the organization’s representative to the U.S. Civil Society Working Group on Women, Peace, and Security. Wakkaf helped deliver humanitarian aid assistance to people from all over the world while serving with the American Red Cross and the Syrian Arab Red Crescent. Wakkaf's doctoral dissertation will focus on the topic of reparation and the treatment of refugees and migrants under international law.