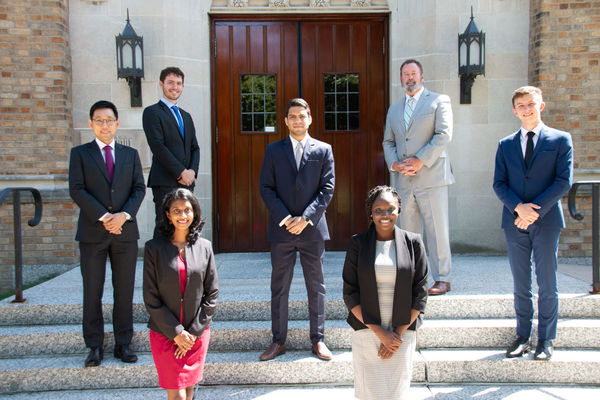 Parker Douglas received his J.D. from the University of Utah, where he was Editor-in-Chief of the Utah Law Review and graduated Order of the Coif. He previously received his Ph.D. in English from the University of California, and his B.A. in English and History from Pitzer College. Parker has practiced public law as part of several nonprofit legal entities, focusing on rights to free speech and expression, freedom of conscience, and free exercise of religion. Previously, he was the 2017-2018 Supreme Court Fellow, serving in the Office of the Counselor to Chief Justice John G. Roberts. From 2014 to 2017, he was Utah’s federal solicitor and chief deputy attorney general and litigated all of Utah’s constitutional matters in federal court. He also served on Utah’s anti-human trafficking task force. Before that, he was an Assistant Federal Defender, and member of a global law firm’s Supreme Court and appellate section. His cases include successful defense of antipolygamy laws in Brown v. Buhman (the “Sister Wives Case”), serving as defense counsel in U.S. v. Mitchell the “Elizabeth Smart Case”) and defending as part of a team Guantanamo detainee Ammar al-Baluchi, including his right to worship. Prior to practice, he served as law clerk to judges Michael W. McConnell, then on the U.S. Court of Appeals for the 10th Circuit, and Tena Campbell on the U.S. District Court for the District of Utah.

Micheál Ganley earned his Law Degree (LLB) from Trinity College Dublin in May 2019. At the age of 22, Micheál is one of the youngest people ever to pass the New York State Bar exam, having passed the exam in February 2020. Prior to commencing his LLM at Notre Dame Micheál served as the‘Law and Public Policy Fellow’ at the De Nicola Centre for Ethics and Culture here at the University of Notre Dame. During the LLM program, Micheál plans to study areas related to Public and International Law. He will also serve as a staff editor on the Notre Dame Journal of International & Comparative Law this academic year. Outside of law school, Micheál has a deep passion for Neapolitan cuisine, classical philosophy, and folk music. He is also an amateur genealogist and avid Formula-1 fan.

Railen Alejandro Hernández Guatache earned his law degree from Universidad Católica Andrés Bello in 2018. While studying, Mr. Hernández was part of the student representative body of his university. After his graduation, he served as international judicial representative for a Deputy of the National Assembly of Venezuela. He also worked as Legal Advisor for Civilis NGO and as a Legal Intern at the Inter-American Court of Human Rights. Mr. Hernández has participated in more than five international moot court competitions and has coached different teams from different universities to participate in moot court competitions. Prior to Notre Dame, he worked as an International Lawyer for the Instituto Internacional de Responsabilidad Social y Derechos Humanos, an institution presided over by Victor Rodríguez Rescia, a former member of the Human Rights Committee of the United Nations. Mr. Hernández has dedicated most of his time to human rights litigation and has accumulated experience acting before various international organisms such as the African Commission on Human and People’s Rights, Working Group on Arbitrary Detentions, U.N Rapporteurships, and the Inter-American Commission on Human Rights. He is particularly interested in Transitional Justice.

Kyung Mo Kang is a lawyer who is admitted to the District of Columbia Bar. Mr. Kang has practiced law mostly as an in-house counsel at a shipbuilding company after obtaining a Bachelor in Law (Korean law) from Myongji University and J.D. equivalent from Handong International Law School, a U.S. style law school in the Republic of Korea. Also, he, as a contract attorney, participated in the discovery process in E. I. duPont v. Kolon Industries Inc. at Paul Hastings and on a compliance project at KCC, which is a major construction company in Korea. Meanwhile, his main focus is on North Korean issues in the human rights area. Mr. Kang is a research fellow at Transitional Justice Working Group, a Seoul-based organization for North Korean human rights. As a research fellow, he has researched transitional justice mechanisms in the Extraordinary Chambers in the Courts of Cambodia (ECCC), and the crime of enforced disappearance (abduction). He has published two books titled “A Study on Extraordinary Chambers in the Courts of Cambodia – Transitional Justice in Cambodia and the Unification of Korea”) and “A study on the International Tribunal to prosecute those who are accountable for Civilian Abduction during the Korean War”. Moreover, he successfully assisted refugees in litigation to obtain refugee status in Korea at a Christian refugee supporting organization before becoming a lawyer. His research interests are transitional justice, genocide, crimes against humanity, the international criminal tribunal system, international dispute resolution, UN mechanisms, religious freedom, and freedom of speech. Here is the link from the Research Information Sharing Service (RISS) in Korea: http://www.riss.kr/link?id=M14205762

Jemimah graduated with a bachelor’s law degree from Strathmore University, Kenya in 2016. After this, she attended the Nigerian Law School qualifying to practice as a barrister and a solicitor of the Supreme Court of Nigeria. During her undergraduate studies, Jemimah worked as an intern at the National Human Rights Commission Nigeria, working closely with victims of human rights abuses. She has worked as a civil and criminal litigation lawyer in a Nigerian law firm. Prior to enrolling at Notre Dame, Ms. Kolo worked as a volunteer with the humanitarian aid organization, Compassion International. She has enrolled for an LLM in human rights at Notre Dame because of her passion for socio-economic rights.

Asha Hansinee Mendis earned her Bachelor of Law from General Sir John Kotelawala Defence University, Sri Lanka as a civil student in 2018. She participated in the international rounds (2016) of the International Lawasia Moot Court Competition and was a semifinalist at the national rounds of the Henry Dunant Moot court Competition (2016). Her research on ‘female Facebook privacy in Sri Lanka’ received the Gold medal at the 3rd World Conference on Women’s Studies (2017), Sri Lanka. Her undergraduate research was on early-childhood educational rights of the children of incarcerated mothers in prison in Sri Lanka. Since 2018 she has worked as a researcher in the UNDP-UNV in Sri Lanka on a prison research study. During that time, she promoted and protected the rights of prisoners and vulnerable groups. Ms. Mendis also worked at the Independent Human Rights Commission of Sri Lanka. She also worked as a Consultant to the UNDP-UNODC, Sri Lanka. Read Ms. Mendis’ work here: Asha Hansinee Mendis, Seeker Are You Protected? Social Media and Protection Granted to Women in Sri Lanka. Journal of International Women’s Studies, 20(7), 319-333. Available at: https://vc.bridgew.edu/jiws/vol20/iss7/20/