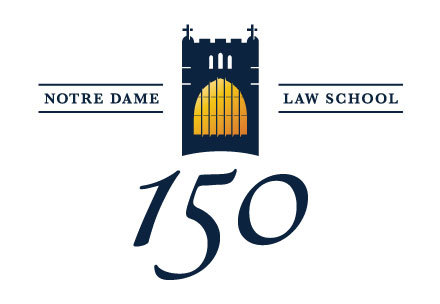 The Law School celebrated its sesquicentennial in 2019.

Notre Dame Law School is an eminent law school at the heart of a great Catholic university. We are engaged in an integrated mission that combines teaching, research, and service.

As teachers, we consider our role fundamentally to be one of professional formation, as we educate our students to practice law with competence and compassion, and to be leaders in the bar, the academy, and their communities. As scholars, we seek to advance knowledge in a search for truth through original inquiry and publication. We serve our University and the other communities to which we belong, and by doing so we seek to foster an understanding of how law enables and inhibits the achievement of individual and social goals, as well as to facilitate greater commitment to the relationship between law and social justice.

We do all of this within our Catholic tradition. That tradition, which spans the globe and embraces believers from all races, cultures, and levels of economic development, leads us to strive to broaden and deepen our academic and practical understanding by drawing upon the unique resources of our religious tradition and the traditions of other faiths. Committed to the most demanding standards of scholarly inquiry, we seek to illustrate the possibilities of dialogue between, and integration of, reason and faith. 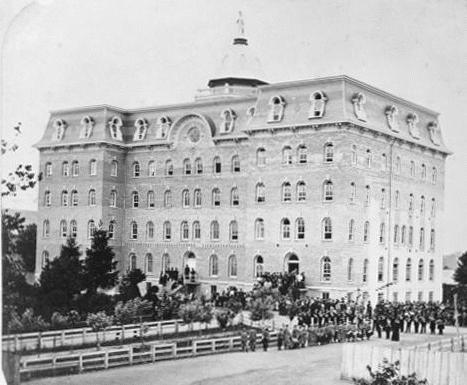 The first law course at the University of Notre Dame met February 1, 1869, in the Main Building — the second building to stand on the spot, and the predecessor to the current Golden Dome that many know today.

[For even more on our past deans and history, visit our Library's archives. To read A Century of Law at Notre Dame by Rev. Phillip S. Moore, C.S.C., please click here.] 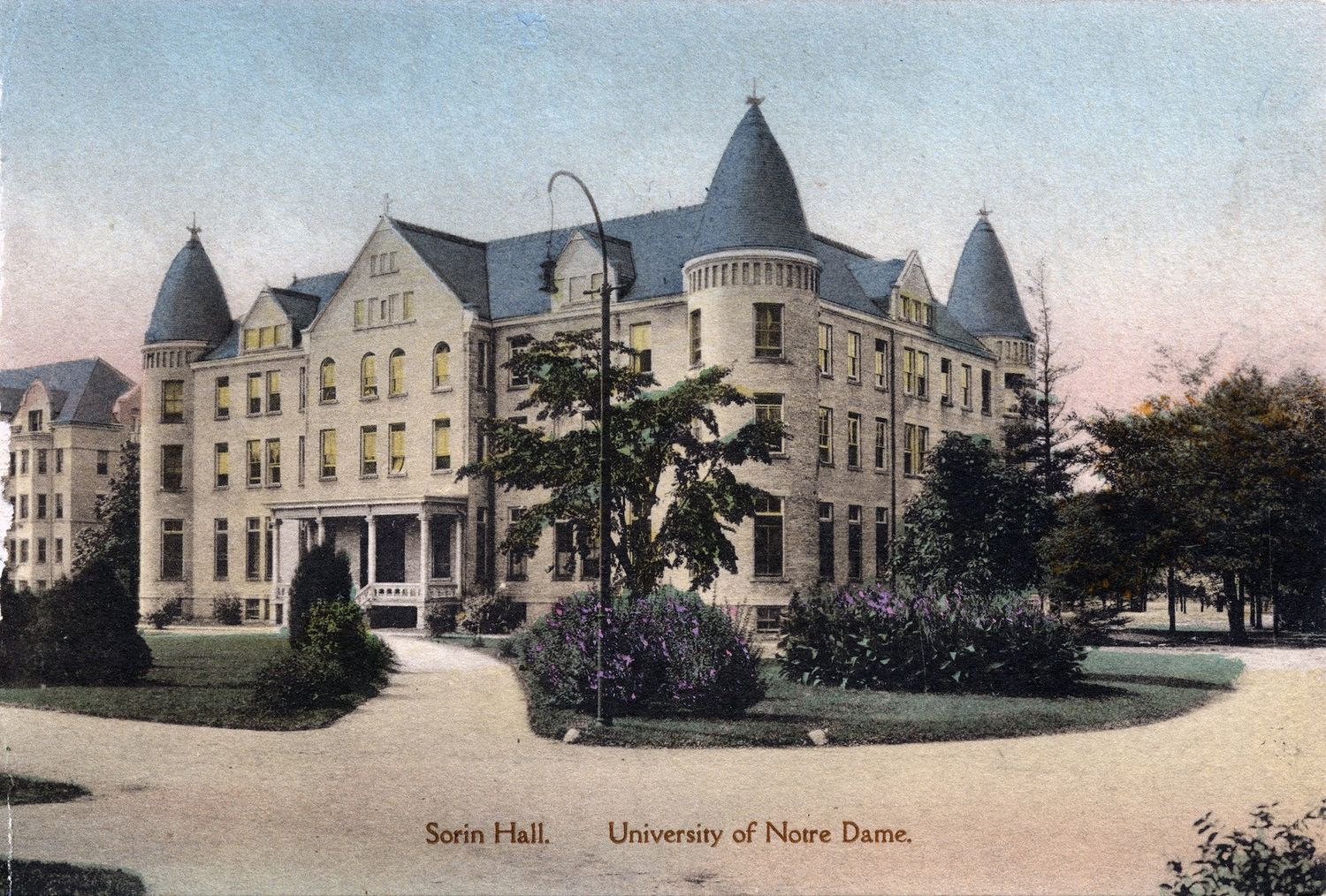 The Law School's second home was the first floor of Sorin Hall from 1889 to 1919. Legend has it that Colonel William J. Hoynes, the Law School's first dean who also lived in Sorin, demanded that a front porch be added to the entrance after a group of pranksters dumped a bucket of water on him from an upper-story window when he was leaving the building. The porch was built and remains one of Sorin Hall's signature characteristics. 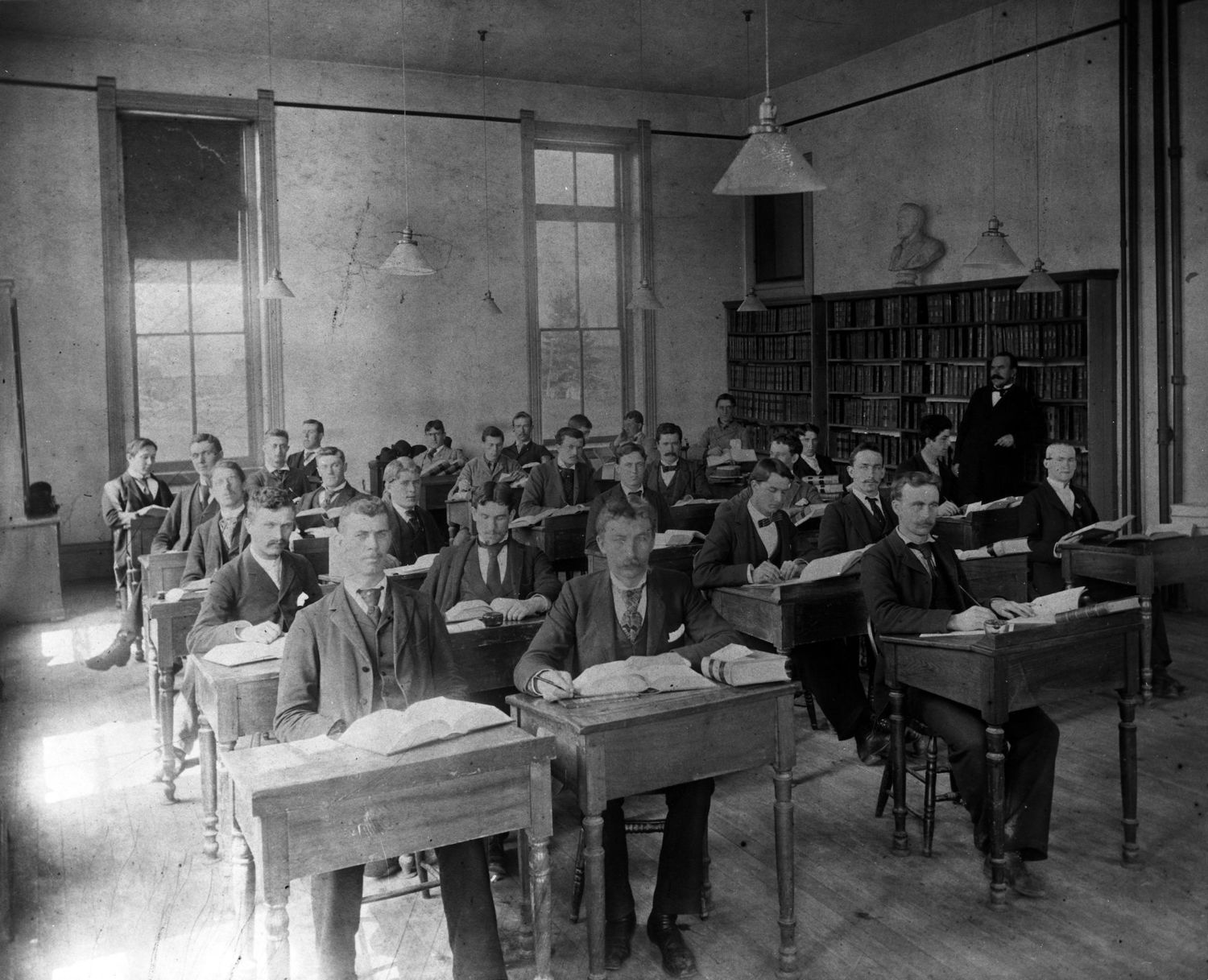 Hoynes, pictured here leaning against the bookshelves while teaching a class of students in Sorin Hall, was offered the post in 1883. According to the Chicago Evening Journal, which published the news, "Mr. William Hoynes, one of the very ablest men of the Chicago bar, has just accepted the professor's chair in the law department of Notre Dame University. The University authorities are to be congratulated on their selection. Mr. Hoynes, as a speaker, writer, thinker and lawyer, has no superior of his own age in the Northwest." 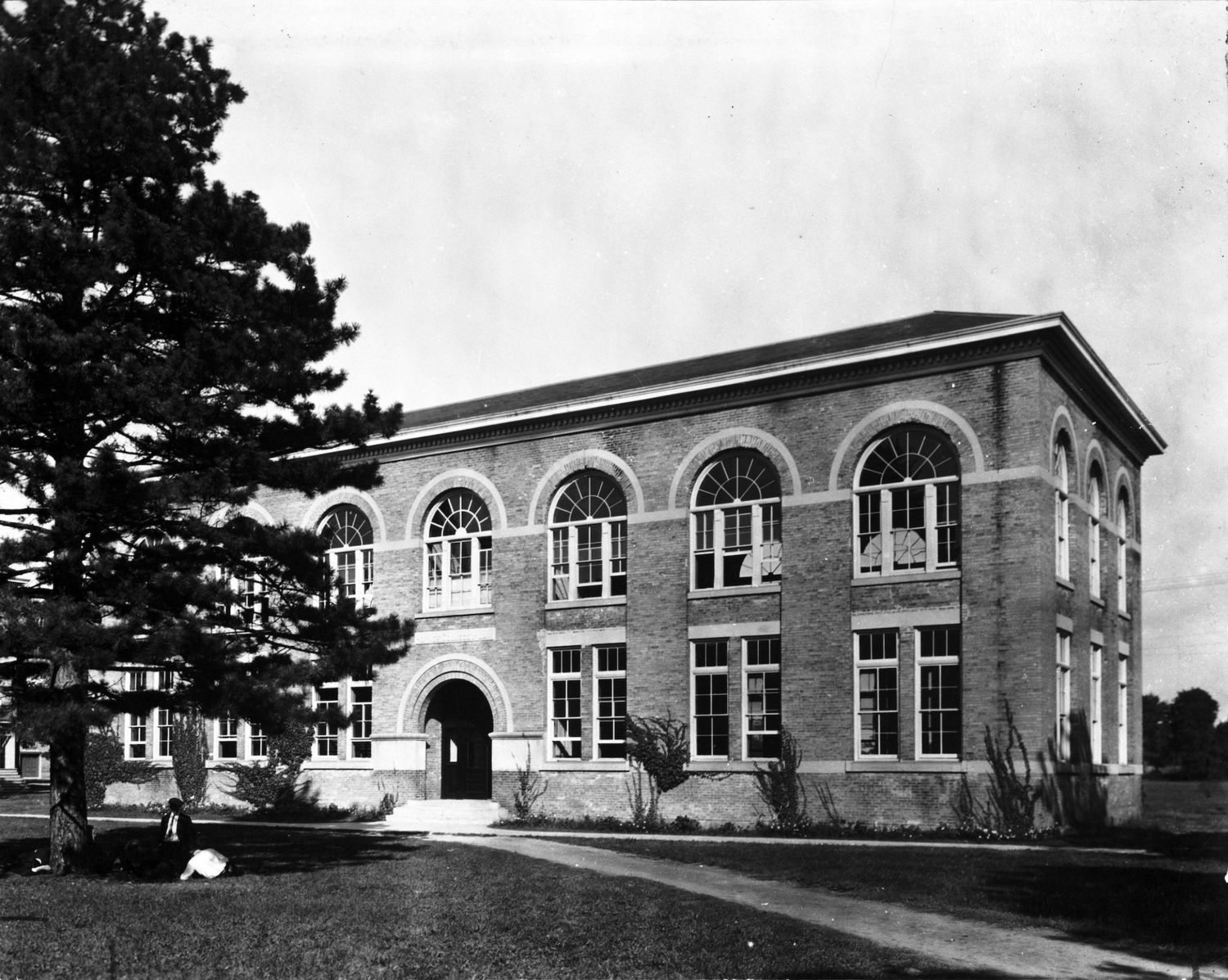 Hoynes Hall — now known as Crowley Hall — was built and opened in 1919 on the same quad as the Main Building and Sorin Hall. This was the Law School's home for the next 11 or so years. 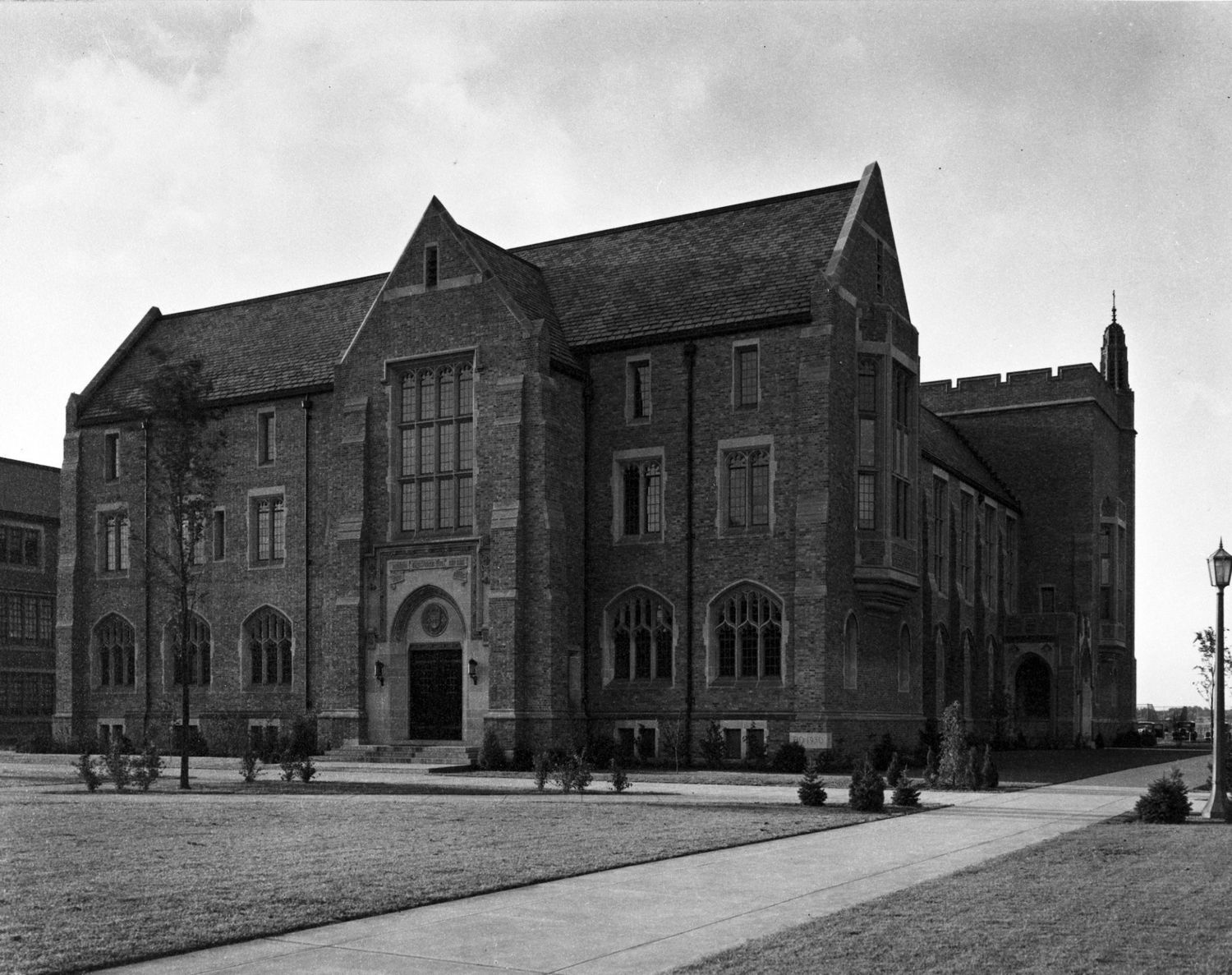 The Law School Building was completed around 1930, and still serves as the home for the Kresge Law Library and some of the Law School's staff offices, as well as handful of classrooms. 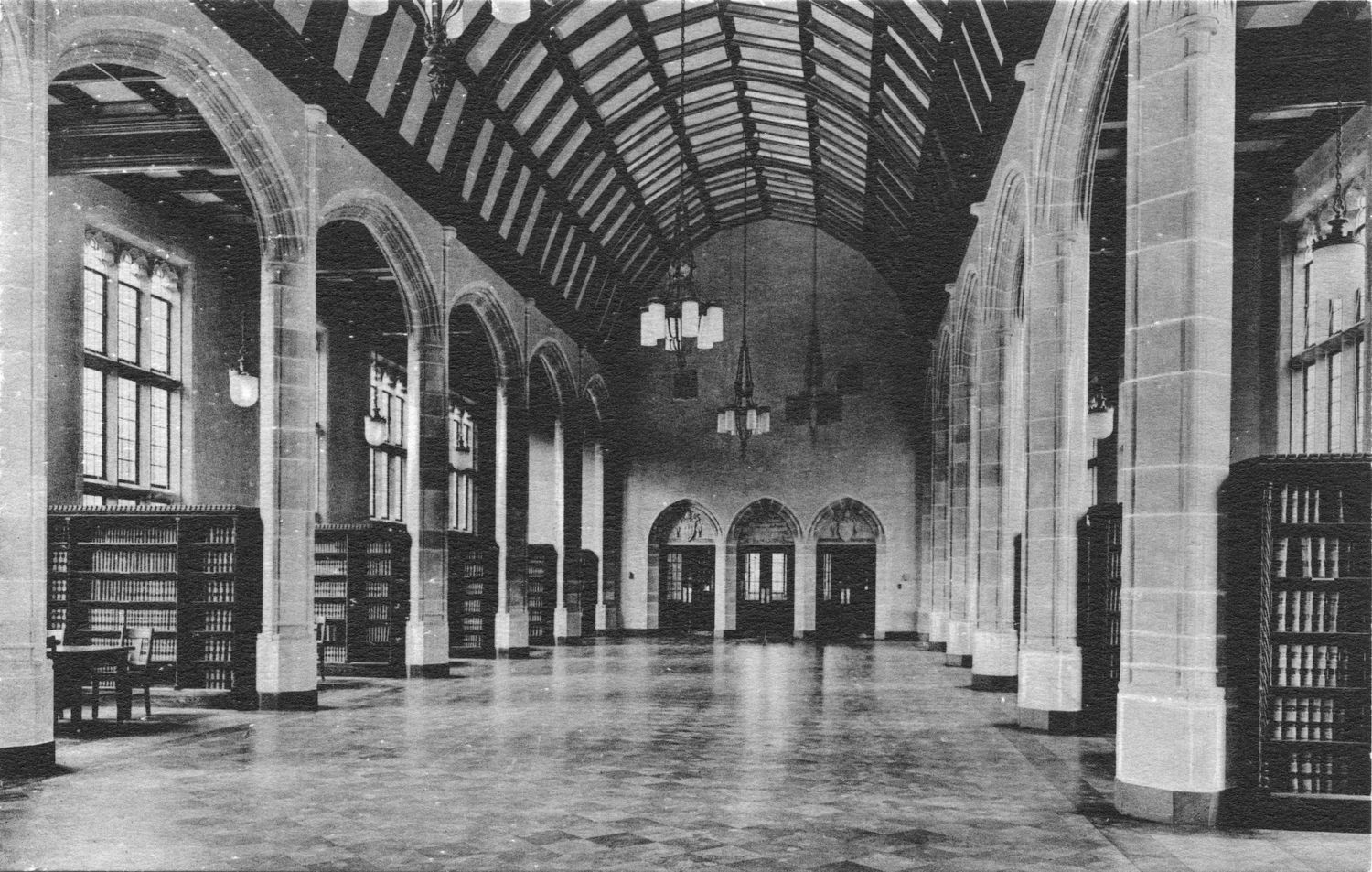 The original main Reading Room did not have carpet or an upper floor, though scholars who've spent time in this hall will still note many of the same architectural features present today. 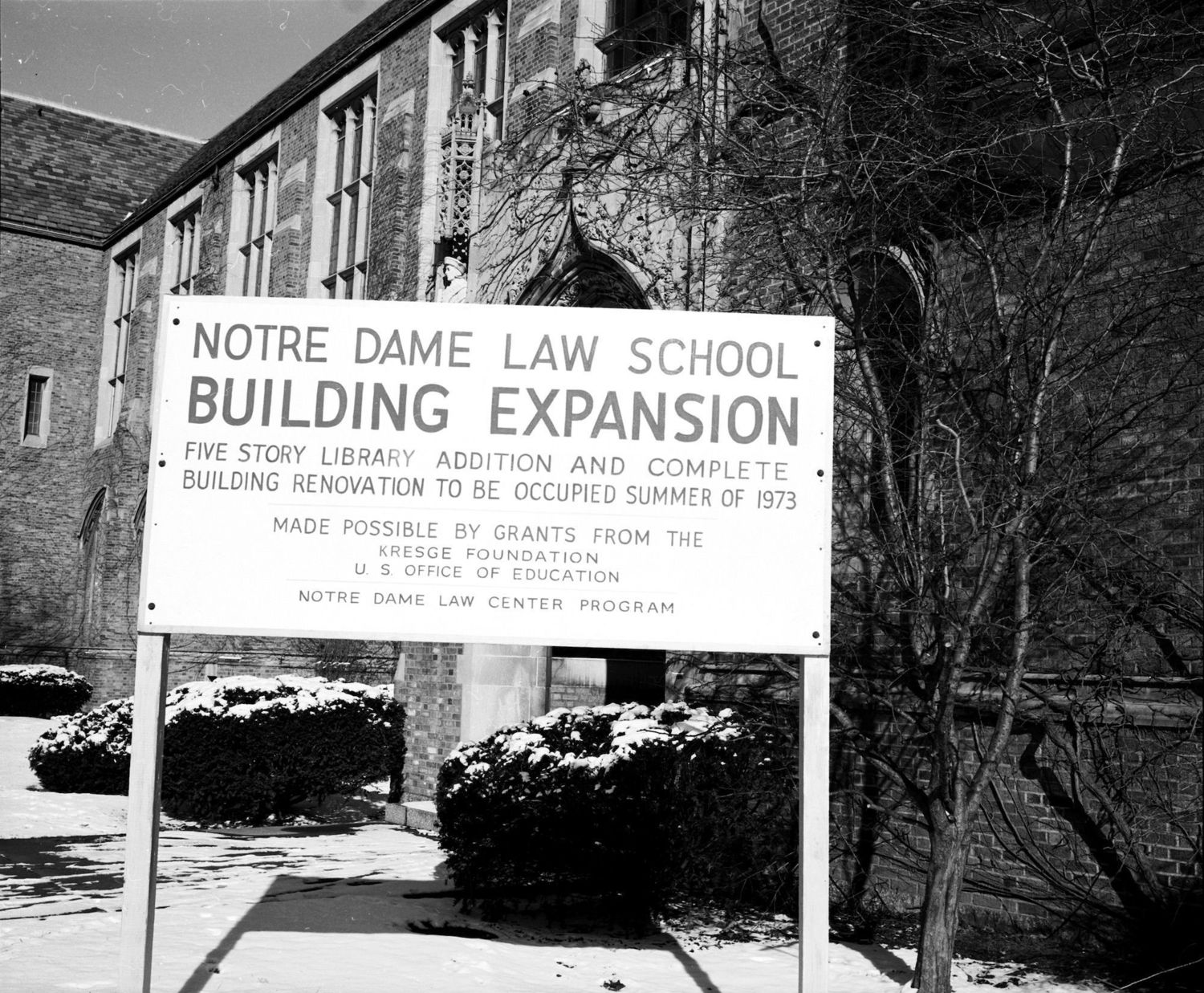 The building underwent a major renovation in the early 1970s, completed in 1973. The renovation and expansion overhauled what was present and added more room for the library.

In 2008, the Law School completed another major renovation and addition, connecting Biolchini Hall of Law to the newly constructed Eck Hall of Law by way of the Commons. The iconic archway is known to many football fans from the Band of the Fighting Irish, who march beneath it on the way to Notre Dame Stadium each game day.