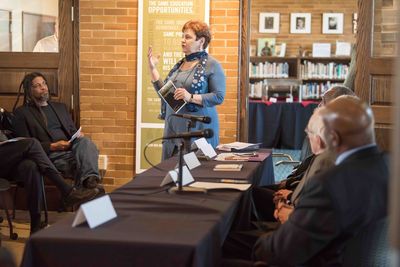 The University of Notre Dame’s award-winning “What Would You Fight For?” series featured the Law School's Judith Fox in a nationally televised video that aired Saturday, September 8, during the Notre Dame-Ball State football game.

Fox’s interest in predatory and discriminatory lending stems from her previous career as a loan officer. She witnessed firsthand how banks could prey on their clients, so she became a lawyer to help customers from the other side.

Now she’s a national expert on foreclosure, predatory lending, and fair housing. She has held advisory positions with both the Consumer Financial Protection Bureau and the Indiana Foreclosure Legal Assistance Program. Last year, in Illinois, she was instrumental in passing statewide legislation against predatory contracts for deed. Similar efforts are underway in Indiana, Michigan, and Ohio. But at the Notre Dame clinic, she’s also fighting individual cases. Along with a team of Notre Dame Law students, Fox serves as legal representation for people who have been unfairly evicted or scammed by these contracts, and tries to win back their homes.

The "What Would You Fight For?" series showcases the work, scholarly achievements, and global impact of Notre Dame faculty, students, and alumni. The two-minute segments, each originally aired during a home football game broadcast on NBC, highlight the University’s proud moniker, the Fighting Irish, and tell the stories of the members of the Notre Dame family who fight to bring solutions to a world in need.