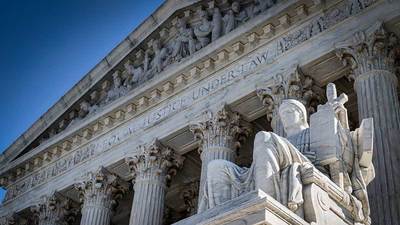 The case was brought by Brandi Levy, a 14-year-old junior varsity cheerleader who did not make the varsity squad for the next year and simultaneously did not get the position she wanted on the softball team. Off school property, she aired her frustrations on social media.

“For more than 50 years, the justices have struggled to define the free-speech rights of public school students,” said Richard W. Garnett, the Paul J. Schierl/Fort Howard Corporation Professor of Law at the University of Notre Dame.

“On the one hand, the court has recognized that public schools are a special environment and that schools cannot do their job if disruptive expression is fully protected,” said Garnett, a noted freedom of speech expert and director of the Notre Dame Program on Church, State and Society. “The public school setting is not, and cannot be, a freewheeling ‘marketplace of ideas.’ On the other, students do not lose their constitutional rights at the public school door and school officials should not be permitted to censor students’ speech simply because it is controversial or unpopular.”

During today’s oral argument, the justices pressed lawyers for both sides, looking for workable rules and doctrines that distinguish between protected, private speech and expression that disrupts the work of schools and teachers.

“Today, in part because of social media that blur the line between on-campus and off-campus speech, there is a real risk that school officials’ desire to maintain an effective school environment will result in government supervision and censorship of young people’s protected political and religious expression,” Garnett said. “Legal doctrines should be both workable and consistent with the Constitution’s meaning. The attorneys on both sides of the dispute struggled to provide clear standards that would identify the limits of governments’ power to regulate or punish students’ controversial or critical speech.”

According to Garnett, the mere physical location where the expression takes place — especially if it takes the form of a Snap — is not the only relevant factor.

“It also seems clear that the First Amendment does not permit school officials to strictly regulate students’ speech simply because they are students or merely because the expression is somehow about school,” he said. “As the attorney for the student put it, ‘students don’t carry their schools with them on their backs.’

“Public school officials are still government officials, and they are not permitted by the First Amendment to censor ideas they dislike or speech with which they disagree, regardless of where it happens,” he said. “Nor does the Constitution allow officials to take over parents’ role and responsibility with respect to young persons’ speech and expression. At the same time, it seems unlikely that the Constitution requires that public schools’ educational function, and students’ access to learning, be held hostage by students who use evolving technologies in threatening or seriously disruptive ways.”

Garnett believes the justices are seeking a relatively narrow way to dispose of this particular case, one that would not require them to make any grand pronouncements or to write what several of the justices called a “First Amendment treatise.”

Originally published by Shannon Roddel at news.nd.edu on April 28, 2021.