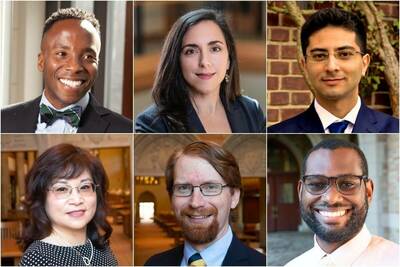 Notre Dame Law School is pleased to announce several additions to the faculty.

Seymore returns to Notre Dame after teaching for 11 years at Vanderbilt Law School, where he was the New York Alumni Chancellor’s Professor of Law. He focuses his research on how patent law should evolve in response to scientific advances and how the intersection of law and science should influence the formulation of public policy.

“Sean Seymore is widely recognized as a leading chemist as well as one of the most prominent patent experts in the United States,” Dean Cole said. “We are delighted to welcome him back home to Notre Dame.”

In addition to his teaching and research, Seymore will serve with Professor Stephen Yelderman as co-director of Notre Dame Law School’s Program on Intellectual Property & Technology Law.

Sherif Girgis is an associate professor of law and a faculty fellow with the Religious Liberty Initiative. Girgis joins Notre Dame Law School from the law firm Jones Day, where his practice focused on appellate and complex civil litigation. Prior to joining Jones Day, Girgis served as a law clerk to Supreme Court Justice Samuel A. Alito Jr. and Judge Thomas Griffith of the U.S. Court of Appeals for the D.C. Circuit.

He is co-author of What Is Marriage? Man and Woman: A Defense, cited by Justice Alito in United States v. Windsor, and Debating Religious Liberty and Discrimination, published by Oxford University Press. He has spoken at more than 100 conferences and debates and written on moral and legal issues in the Yale Law Journal, the Harvard Journal of Law and Public Policy, the American Journal of Jurisprudence, and a range of other publications in law and philosophy.

“Sherif Girgis has already made a mark in cutting-edge debates involving Catholic doctrine and public policy,” Cole said. “His work has already been cited by the Supreme Court, and his work will continue to position Notre Dame Law School as a platform for national dialogue on important issues.”

Maria Maciá is an associate professor of law as of the spring 2021 semester, having been a visiting professor of law for two years prior. Maciá is an economist whose research considers the regulation of corporations and valuation issues through an empirical approach. She investigates the effects of regulations that encourage corporate social responsibility and risk management and limit discriminatory behavior, and she has a particular interest in disclosure requirements and the regulation of banks.

“Maria Maciá is a key addition to our Law & Economics program, as well as our corporate law faculty. She brings a trained Catholic eye to questions of corporate social responsibility and the effectiveness of disclosure in financial regulation,” Cole said.

Stefan McDaniel joins Notre Dame Law School as a visiting professor of law. McDaniel recently concluded a clerkship with Judge José Cabranes of the U.S. Court of Appeals for the Second Circuit. Prior to his clerkship, McDaniel worked for Jones Day in the labor and employment department, and at Simpson, Thacher & Bartlett in the litigation department.

McDaniel earned his J.D. from NYU School of Law, an M.A. in political science from the University of Pennsylvania, and an A.B. in religion from Princeton.

“Stefan McDaniel is an emergent voice regarding the history of Catholic legal thought. I expect that his work will demonstrate the rich tradition and the future importance of the intersection of faith and reason,” Cole said.

Yan Yu joins the Kresge Law Library as a law librarian from K&L Gates Law in Pittsburgh, where she oversaw technical services for the firm’s offices across the U.S. and overseas. She earned her law degree from Zhongnan University of Politics and Law, Wuhan, China, and her master’s of library science from Clarion University of Pennsylvania. She also spent four years in Dublin, Ireland, at Ballsbridge College of Business Studies, where she earned a certificate of business communication.

“Yan Yu brings global experience to our Law Library, and is an important addition to our Global Lawyering Initiative,” Cole said.

Steven Mitchell joins the Kresge Law Library as a law librarian from Barnard College, where he was a senior tech specialist. He earned his J.D. from New York University School of Law, where he was managing editor of the Journal of Law & Liberty, and his master’s of library science from the Pratt Institute School of Information. Mitchell also has a deep interest in the influence of the early Catholic Church on modern legal systems.

“Steven Mitchell brings valuable technical expertise to the Kresge Law Library, and deep knowledge of the influence of early Catholic thought on the shape of our law today,” Cole said.