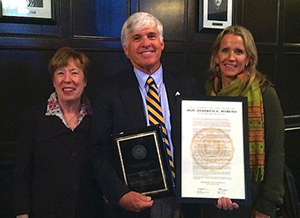 The Notre Dame Law Association awarded the St. Thomas More Award to the Honorable Federico A. Moreno '74 on April 12, 2013.

Judge Moreno was born in 1952 in Venezuela, and received his A.B. from the University of Notre Dame, cum laude, in 1974. After graduation, he worked briefly as a teacher and then attended the University of Miami Law School, from which he received his J.D. in 1978. After law school, Judge Moreno was in private practice, and served indigent clients while employed by the Federal Public Defender’s Office in Miami. In 1986, he was appointed to the Dade County Court bench and then to the Circuit Court a year later. President George H. W. Bush appointed Judge Moreno in 1990 to the U.S. District Court for the Southern District of Florida. He currently serves as chief judge for one of the largest federal courts in the country.

Judge Moreno has served on the boards of Legal Services of Greater Miami, the Cuban American Bar Association’s Pro Bono Program, and the United Way. He received the Pro Bono Service Award of the Cuban American Bar Association and the United Way’s “People Helping People” Award. His activities also include membership in the Notre Dame Club of Miami and the University of Miami Law School Alumni, of which he was a director. He has been married for 35 years to his wife, Cris. They have three children: Cristi, who graduated from Notre Dame Law School and is currently an assistant U.S. attorney; Ricki, who graduated from Notre Dame with a degree in accounting and received his MBA from Wharton; and Victoria, who is in her senior year at Notre Dame.

The St. Thomas More Award honors graduates of the University of Notre Dame “who have distinguished themselves as jurists or public servants, while exhibiting uncompromising integrity and loyalty to conscience.” Since instituted by the Notre Dame Law Association in 2000, the award has been presented two other times: to Rev. Theodore Hesburgh, C.S.C., in 2004, and to Dean Patricia A. O’Hara in 2009.

The Notre Dame Law Association enjoys membership of more than 8,000 alumni and friends worldwide. The NDLA board supports Notre Dame Law School by promoting a spirit of solidarity and friendship among alumni, providing mentoring and recruitment efforts for prospective students, sponsoring activities that advance the interest of the University of Notre Dame, and encouraging annual giving.