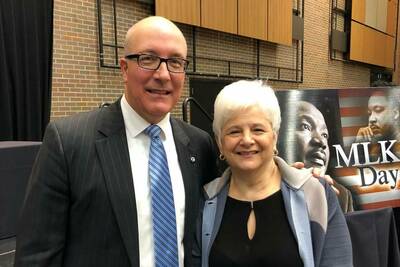 The mayors of South Bend and Mishawaka honored Notre Dame Law Professor Judith Fox recently for her decades of dedication to helping low-income people facing eviction and other financial hardships.

Fox, who directs the Law School’s Economic Justice Clinic, was presented with the 2022 Dr. Martin Luther King Jr. Drum Major for Community Service Award by the mayors on Feb. 21. The recognition is awarded annually to a community leader who has made a difference in the lives of local residents.

The Drum Major Award is named after King’s famous “Drum Major Instinct” sermon, delivered just two months before his assassination. King ended the sermon with an often-quoted passage reflecting his eventual funeral, where he hopes that he will not be thought of for the accolades he had received, but rather that he was “a drum major for justice … a drum major for peace.”

“Throughout her career, Judy Fox has exemplified the spirit of Dr. King’s fight for racial and social justice. As a lawyer, teacher, and mentor to our students, she has made our community better,” said G. Marcus Cole, the Joseph A. Matson Dean and Professor of Law at Notre Dame Law School. “This award is well deserved.”

Fox, a Notre Dame Law School graduate who has served on the faculty for 25 years, has dedicated her legal career to fighting for fair housing and other socio-economic issues. She was featured in Notre Dame’s “What Would You Fight For” campaign — “Fighting For Fair Housing” — in 2018.

“I am deeply humbled to receive the Drum Major award in honor of Dr. Martin Luther King Jr.,” Fox said. “In his famous Drum Major sermon, Dr. King said it is ‘in love and in justice and in truth and in commitment to others … that we can make of this old world a new world.’ It is an honor to be mentioned simply as someone who believes that every human being is entitled to love, justice, and a safe place to call home.”