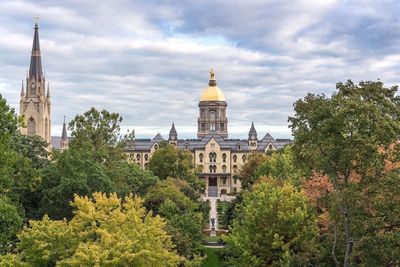 Richard Garnett, the Paul J. Schierl/Fort Howard Corporation Professor of Law at Notre Dame Law School and faculty director of the Law School’s Program on Church, State & Society, has been awarded funding from the University of Notre Dame’s Church Sexual Abuse Crisis Research Grant Program to address issues emerging from the crisis and to prevent abuse in the future.

The Church Sexual Abuse Crisis Research Grant Program is one initiative of Notre Dame’s Research and Scholarship Task Force that University President Rev. John I Jenkins, C.S.C., established in 2018 in response to news of the crisis of sexual abuse in the Catholic Church.

Garnett’s research proposal, “Consequences of the Sexual Abuse Crisis: Related Legal Issues and Policy,” considers how the Church can move forward and prevent sexual abuse while maintaining its autonomy. The proposal, which will be run under the Program on Church, State & Society, includes a series of three public events with experts and academic scholars from various disciplines related to these issues. Invited speakers will include scholars from the Notre Dame community, as well as top legal scholars from around the country and internationally.

The discussions will center around three themes: the sexual-abuse scandals and church-state relations — comparisons and best practices; historical antecedents and responses to scandals in the Church; and recent state interventions in the Catholic Church as a result of crimes of sexual abuse of minors perpetrated by clerics.

“The sexual abuse crisis in the Catholic Church has damaged the reputation of the Church in devastating ways. As the Church works to regain the trust of its own members and society at large, the University of Notre Dame can help in the process by sponsoring serious research and by fostering important discussions,” said Garnett. “As some of these discussions will inevitably lead to ideas regarding church structure and church autonomy, the Program on Church, State & Society is well positioned to hold meaningful conversations about Church reform and prevention of sexual abuse while preserving its needed autonomy.”

The University is dedicating up to $1 million over three years to fund research projects that address issues emerging from the Church’s sexual abuse crisis.

The grants provided by the Research and Scholarship Task Force are intended to address the various aspects of the crisis, including proposals that address maintaining safe environments for minors, maintaining safe environments for adults in asymmetrical power relationships, understanding the history and causes of the crisis, and proposing reforms in the Church and society to which the current crisis gives rise.