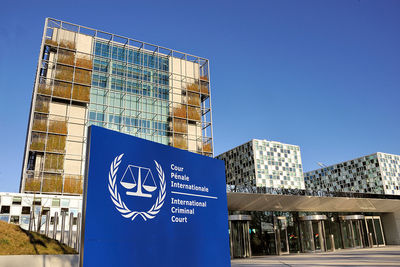 When Professor Jimmy Gurulé took his London Law Program students to The Hague last spring to visit the International Criminal Court and Peace Palace, two Notre Dame Law School alumni were there to greet them.

In addition to describing their extraordinary careers doing human rights work at the ICC, Notre Dame lawyers Rosette Muzigo ’93 M.A., ’94 LL.M. and George Mugwanya ’00 J.S.D. talked to the students about the Law School’s role in preparing them for their calling.

Muzigo, who earned an M.A in International Peace Studies at Notre Dame in addition to her LL.M in International Human Rights Law from the Law School, explained that she is now a legal advisor in the Legal Advisory Section of the ICC’s Office of the Prosecutor.

Prior to joining the ICC, she was the longest-serving legal officer for the International Criminal Tribunal for Rwanda, serving the tribunal from its inception in 1995 to its closure in 2015 and pioneering the prosecution of rape as a form of genocide. The ICC later loaned her to the Special Court for Sierra Leone to establish an office and manage the highly publicized trial of former Liberian President Charles Taylor. Later, she was loaned to the United Nations’ Office of the High Commissioner for Human Rights to head the investigation of sexual and gender-based crimes committed during the Arab Spring, and was deployed to Libya.

Muzigo said her studies at Notre Dame “not only deepened my understanding and knowledge of what was then a novel area of study, but also prepared me for the assignments that I have undertaken over the last 26 years since I left Notre Dame. Good knowledge of international law, international humanitarian law, and human rights law was fundamental to defining elements of the new international crimes when I first joined the International Criminal Tribunal for the former Yugoslavia.” Additionally, former Professor Teresa Godwin Phelps’ course on gender studies has been instrumental for Muzigo in analyzing, investigating, and prosecuting sexual and gender-based crimes. Muzigo was deployed to eastern Democratic Republic of Congo and Rwanda with the UN Refugee Agency to investigate sexual exploitation and abuse of refugees and vulnerable individuals by UN peacekeeping staff and other humanitarian workers.

In December 2001, however, Mugwanya’s human rights training led him to join Muzigo as a legal advisor in the UN’s International Criminal Tribunal for Rwanda. By 2007, he had been promoted to the position of senior appeals counsel/senior legal advisor, successfully leading the prosecution of many complex international criminal appeals of genocide, war crimes, and crimes against humanity. He was also being asked to offer his expertise to the Special Court for Sierra Leone in the Charles Taylor case and the UN Office of the High Commissioner for Human Rights on a variety of international law, human rights, capacity building, and rule-of-law issues.

Since 2014, Mugwanya has been a prosecution appeals counsel at the International Criminal Court.

“The knowledge and skills I acquired at Notre Dame Law School enabled me to perform with distinction,” he said. He recalled, in particular, lessons in the International Criminal Law course offered by Professor Gurulé and noted that his work in the courses Gender Issues in the Law, International Law and International Organizations, and Human Practice also had a profound impact on him. “They all enhanced my skills and competencies to litigate or respond to difficult legal questions, especially at the international criminal courts and tribunals, and to contribute to such subjects as the investigation and prosecution of sexual and gender-based crimes, which for a long time were ignored in criminal justice. The fact that virtually all of these subjects at Notre Dame included a ‘comparative’ and ‘practical problem-solving’ orientation, and that the professors often punctuated their lectures with calls to us to go out to serve the good of all humanity, made them hugely beneficial to me and continue to inspire my work every day.”

After crediting Notre Dame and his doctoral dissertation committee for enriching his research and writing skills, Mugwanya noted that he has now written two books, The Crime of Genocide in International Law (London: Cameron 2008) and Human Rights in Africa (New York: Transnational Publishers 2003), co-authored a third, The Appeals Chamber of the International Criminal Court: Commentary and Digest of Jurisprudence (Cambridge University Press 2018) and published more than two dozen book chapters and articles in peer-reviewed journals around the world. He has been listed in Who is Who in Public International Law (Cambridge: Crestwall 2007).

“The International Criminal Court is critical to upholding the rule of law and ensuring accountability for the most serious international crimes,” Professor Gurulé said. “Both Rosette and George are dedicated to advancing these important principles and pursuing the cause of justice on a global scale. They represent the highest ideals and values of Notre Dame Law School.”