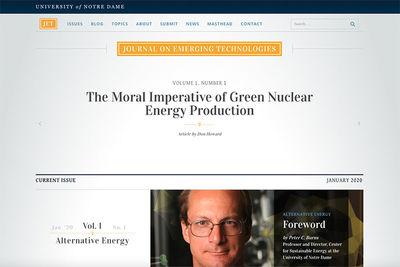 Concluding that the pressing societal questions posed by emerging technologies would be best studied from an interdisciplinary perspective, third-year law student Rolando Rengifo conceived of an innovative academic journal that would bridge legal scholarship with that of science, policy, and ethics.

Over the course of a year, Rengifo fleshed out his idea for a rigorously edited student-run publication that would provide a forum for discussing novel technologies that are creating — or are expected to create — significant political, social, or economic effects. The idea was well received. Notre Dame Law Professors Bruce Huber and Stephen Yelderman agreed to serve as faculty advisors, and more than 30 law students volunteered to fill out the editorial ranks.

Rengifo, who earned his Ph.D. in biomolecular chemistry at Emory University, serves as JET's editor-in-chief.

“Legal scholarship in the technology space reacts to technologies already in place, far removed from anything that is emerging. The idea for this journal arose from my belief that we need to consider the legal ramifications of technologies as they are being conceptualized and developed,” Rengifo said.

“The best way to get to the bottom of this issue, as I see it, is to facilitate interdisciplinary conversations in which scientists and inventors involved in the development of new technologies share their vision and motivation for their research, philosophers and ethicists who consider unrealized consequences of inventions have a chance to share their thoughts, and legal scholars whose scholarship focuses on the tangible consequences that a new technology can have in a law-guided society all share their insights in a forum that could serve as a searchable resource should such concerns come to fruition in the future,” he said.

“In the end, my hope is that this journal will engage scholars in proactive communication that could help address the preventable pitfalls of emerging technologies given the information that is presently and readily accessible through a truly interdisciplinary platform.”

The journal, available at ndlsjet.com, publishes articles of varying lengths and a blog for shorter, student- or practitioner-written pieces that are tailored toward a wider audience than the longer pieces.

Professor Huber is confident that the journal has a bright future.

“I’m thoroughly impressed by what the JET team has done,” Huber said. “Their output has been top notch; the website is incredible; the blog posts are substantial — this team has done outstanding work, and JET is sure to be a strong interdisciplinary platform from this point forward.”

The first issue, with a foreword by Peter C. Burns, professor and director of the Center for Sustainable Energy at the University of Notre Dame, was published on January 31. Volume 1 focuses on alternative energy and features articles addressing the damaging impact of wakes from wind turbines, the case for nuclear energy, a promising approach to improving the performance of the energy grid as it incorporates more renewables, a comparative study of methane waste law as it relates to the increasing use of natural gas for power generation, and a review of the issues raised by efforts to force the disclosure of fracking-fluid trade secrets.

The new journal complements several other Law School and University initiatives aimed at exploring the issues associated with new and developing technologies.

McKenna has also served as a mentor to the students on the JET staff.

Notre Dame Law School has five student-run journals, including the new Journal on Emerging Technologies. Learn about the Law School's other journals.