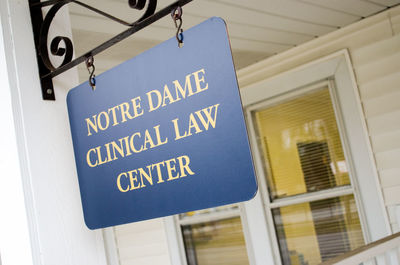 Even before the COVID-19 pandemic, nearly a million Americans each year lost their homes due to eviction, including tens of thousands of Indiana residents.

If Indiana leaders do not take urgent action, there is likely to be an alarming spike in evictions across the state this summer, imperiling both public health and the state’s still-fragile economic recovery, according to a report released July 28 from the Health and Human Rights Clinic at the Indiana University Robert H. McKinney School of Law, the Indiana Justice Project, and Notre Dame Law School’s Economic Justice Clinic.

The report, “How Indiana Courts Can Prevent Evictions: Responding to a Looming Public Health and Economic Crisis,” outlines the scope of the challenge facing Indiana in the coming months, including the significant harm that flows from a mere filing of an eviction court action — what the report calls “The Scarlet E” reflecting its practically indelible mark that harms tenants for years after court proceedings have concluded.

Recent economic analyses show that over a quarter-million Indiana families are at risk of eviction.

“We are continuing to learn about the negative consequences of eviction,” said Judith Fox, director of Notre Dame Law School’s Economic Justice Clinic. “However, a statewide commitment to gathering and sharing data around eviction cases is necessary if we are ever to truly understand the causes of this serious social problem.”

Read more about the report on the IU McKinney School of Law website.