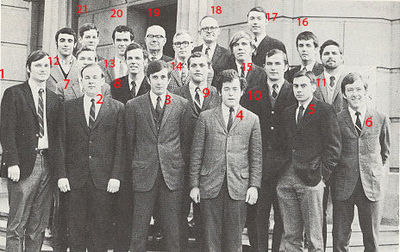 Notre Dame Law School embarked on a unique experiment in legal education in the fall of 1968.

Instead of spending the 1968-1969 academic year at the South Bend campus, 20 members of the Law School’s second-year class would study in London.

The launch of the London Law Program made Notre Dame the only law school where students could earn credit toward an American law degree while studying in England, and it is the only full-year London program approved by the American Bar Association.

In the half-century since the program was born, more than 1,500 budding Notre Dame Lawyers have gone to England to deepen their understanding of the roots of American law, to explore international career opportunities, and to forge lasting bonds with classmates.

Notre Dame Law School and Notre Dame International have been celebrating the 50th anniversary of the London Law Program throughout 2018. The culminating celebration is scheduled for October 20 to 23 in London. Visit law.nd.edu/london50 for more information.

“This is the perfect time to celebrate the London Program’s history and the vital role it has played in the lives of the hundreds of students who have studied there,” said Nell Jessup Newton, Joseph A. Matson Dean and Professor of Law at Notre Dame Law School. “I am confident that the program’s next 50 years will be just as enriching.”

Students who participate in the London Law Program frequently describe it as a life-changing experience, both personally and professionally.

“The London Program is the reason I applied to Notre Dame Law School. I had not spent any time abroad as an undergraduate and felt I needed to fill a missing gap in my undergraduate education,” Noel Augustyn ’74 J.D recalled recently. “It was a very wise decision. The year in London was one of the richest of my life.”

For other Notre Dame Law graduates, the London Law Program set their career paths on an international course.

Raymond Dunn ’82 J.D. said his experience in the program helped prepare him for a career in international investment banking and finance. After law school, he went on to earn an MBA at Columbia University.

“I worked as a research consultant at the OECD in Paris, an investment banker at UBS in London and Hong Kong, and then in our own company, which we started 19 years ago to arrange transactions for clients or with financial partners in the U.S., Latin America, Asia, and Europe,” Dunn said. “The London Law Program helped open the door to pursue my career dreams.”

Jaime McLemore ’07 J.D. lives and works in London today as a result of her participation in the program. She advises on U.S. and international tax and estate planning as a partner at Withers LLP, an international law firm headquartered in London.

“Without it, I would not have discovered London or realized that working in London was an option,” she said. “It certainly is not the easiest or most straightforward legal career path, but I am forever grateful for my Notre Dame London experience because it has led me to where I am – working and living in the greatest city in the world.”

The roots of American law

One of the reasons law students benefit from studying in London is that English law is the basis for American law. The English system is also the mother of legal systems used in Australia, Canada, New Zealand, India, and other nations of the former British Commonwealth.

“What better way to understand American law than to go to its roots? And its roots are in London,” said Michael K. Addo, director of the London Law Program. “When trying to understand the origins and trajectory of American law, knowledge of the common law of England is always helpful.”

Dean William B. Lawless ’44 J.D. started the Notre Dame London Law Program in 1968 through a special arrangement with the Faculty of Law, University College, University of London. In 1971, Notre Dame secured its own quarters and established its own independent program.

The London Law Centre also proved to be an anchor for a much larger Fighting Irish presence in London, as several other academic programs joined the Law School in subsequent decades.

Since 1998, all of the Notre Dame London programs have resided in Fischer Hall near Trafalgar Square, also the home of Notre Dame International’s London Global Gateway. Each year, more than 400 undergraduates, 50 law students, and many graduate students and faculty spend time in London for a summer, a semester, or a full academic year.

This article was published in the program for the Notre Dame-Stanford football game on September 29, 2018.